For hours of family fun, no matter the occasion, Trouble is the board game that I always recommend. It’s easy to play, takes less than five minutes to set up, and almost anyone can get involved – old or young, easygoing or competitive, it really doesn’t matter!

In this guide, I will explain precisely why Trouble should occupy a space in your board game collection. Not only will I offer tips and tricks to help you get ahead and beat your fellow players, but I’ll also offer some insight into the extensive history and origins of the game.

Even the most relaxed of players will undoubtedly find themselves caught up in this chase-and-race board game; Trouble’s simplicity makes it all the more enjoyable, and once you’ve tasted the sweetness of victory, you’re sure to be hooked.

Are you ready for the race of a lifetime? Determined to beat your family and friends? Read on to find out how. 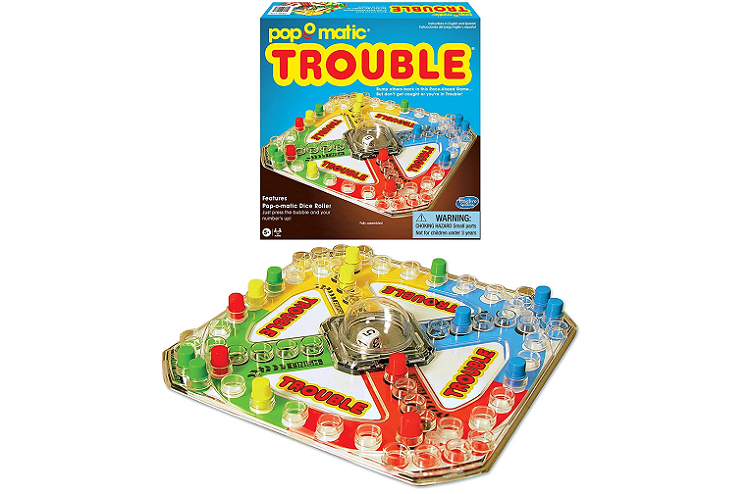 Trouble is a modern version of the traditional game Pachisi that was first launched in the US in 1965. Getting all your pieces across the finish line is the aim of the game, and it’s this singular focus that makes it so much fun to play.

Fortunately, Trouble isn’t quite as simple as it first appears; in fact, there are a number of rules that make the game delightfully frustrating.

The History and Origins of Trouble

Trouble follows a similar format to other board games that are widely available today, such as Aggravation, Ludo, and Parcheesi. This is no coincidence. These games all originate from Pachisi, which is believed to have originated in India in the fourth century AD.

In the 1860s, it entered the West, arriving in England first before spreading to the rest of Europe.

Then, in the late 1890s, the English developed a simpler version of Pachisi called Ludo that was explicitly intended for children.

Pachisi entered America in the late 1860s, where it evolved and became known as Parcheesi, a popular board game that is still on sale today. Interestingly, many other well-known board games from around the world owe their existence to Parcheesi, including:

While the gameplay in Pachisi has certain complexities that make it appealing to adults and children (for example, you can deploy specific strategies to boost your success), Trouble is essentially a game of chance because the number on the die determines each move.

Nevertheless, this is in some ways part of the game’s strength; it can be played and enjoyed by almost anyone of any age.

Design of the Fame 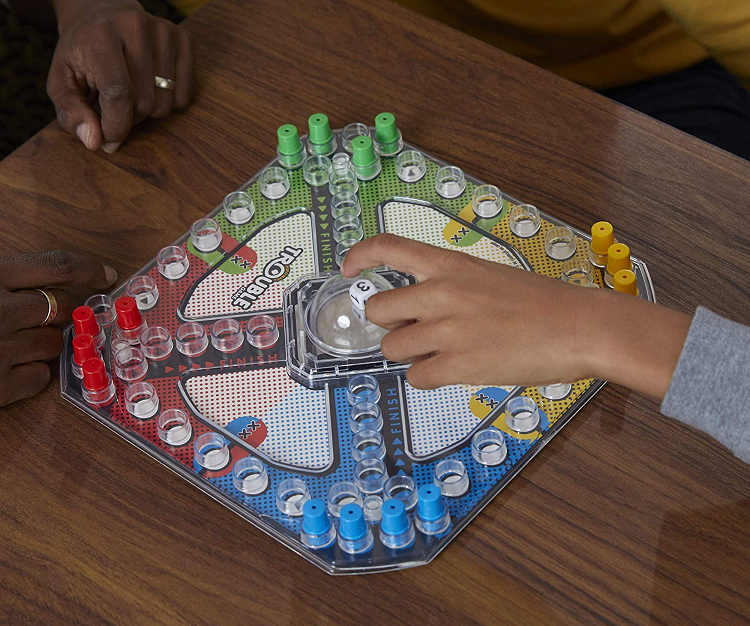 Trouble has a very modern feel compared to some of its sibling games like Wahoo and Aggravation, both of which often include handmade wooden boards.

By contrast, Trouble is exceptionally colorful and contains plastic placeholders that mark out the route around the board.

In addition, while Wahoo uses marbles, Trouble consists of plastic pegs, and there is a Pop-o-Matic dice roller in the middle of the board.

Overall, it has a vibrant and exciting appearance, appealing to a young audience.

The aim of the game is to be the first player to move all four pegs around the board and into the finish zone. After that, you should also aim to send other players’ pegs back to the start. 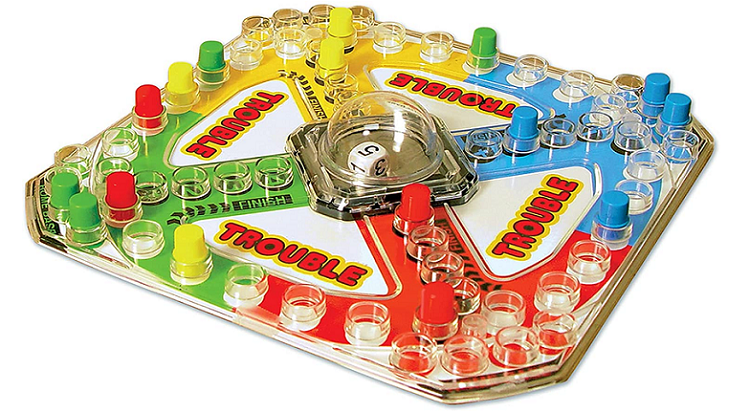 Trouble is quick to set up and easy to master. Here’s how to do it.

Every turn consists of one die roll and one move.

Taking a turn: To move a piece to the “start” position and out of “home,” you first must roll a 6. If you fail to roll a 6, you will have to wait until your next turn and try again.

When you roll a 6, you can move your peg to “start” and take another turn immediately.

Move your peg along the track from “start” according to the number you roll on the die. You must move the same peg, and it should travel in a clockwise direction, counting each space even if it is occupied.

Next time you roll a 6, you can either choose to start a new peg or move one that is already on the track. Then take another turn immediately.

Similarly, if another player’s peg is in your “start” space and you want to move one of your pegs into that space, their peg is sent back to “home.”

Reaching the finish line: When your peg has traveled around the board, it is allowed to enter the matching color finish line.

You can’t move your peg around the board more than once. However, to reach the finish line, you must roll the exact number required. So if your peg is three spaces away, you can only cross the line if you roll a three. If you rolled a four, you’d have to wait until your next turn and try again.

Pegs that have crossed the finish line are safe from all other pegs; they cannot be moved.

End of the game: The winner of the game is the first person to get all four of their colored pegs around the board and into “finish.” The game then continues to see who comes second and third (depending on how many players are involved).

Who is Trouble for?

Trouble is recommended for two to four players aged five and above.

As I mentioned earlier in this guide, I firmly believe that Trouble is one of the best family games on the market due to its thrilling yet straightforward gameplay. For that reason, I would recommend it to almost anyone.

Sure, if you like nitty-gritty strategy games that require lots of brainpower and take a long time to play, Trouble probably isn’t for you. But if you were in a lighthearted group setting with people of all different ages, few board games would be able to have such a widespread appeal.

The thing about Trouble is that even though it doesn’t take long to learn or play, it gets so competitive – especially when played with friends rather than strangers – that even the most hesitant of adults get totally absorbed. Trust me, I’ve seen it happen many times!

How Many Pieces are There in Trouble?

Trouble doesn’t have too many components to keep track of, and the Pop-o-Matic roller ensures that the die never gets lost. 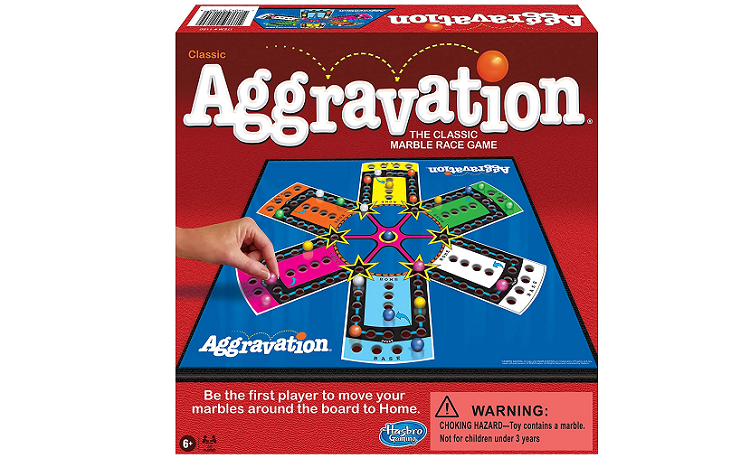 Aggravation shares many similarities with Trouble, one of the biggest being that both games have the same objective: to get all four pieces around the board before your competitors. However, Aggravation has a slightly different board that allows you to use shortcuts and other tricks to get ahead.

Read our comprehensive Aggravation board game guide to find out more. 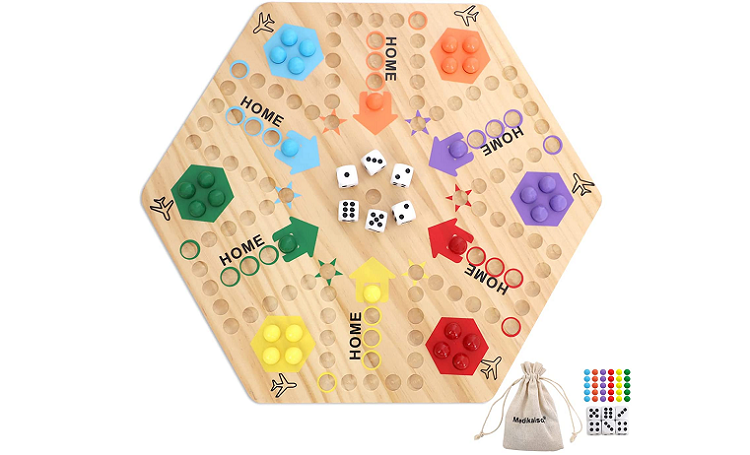 Wahoo has been around for longer than both Aggravation and Trouble, so there are lots of beautiful hand-crafted boards that you can buy online.

The rules of the game are more flexible as well – in fact, there are hundreds of variations out there, and each family will play in a slightly different way.

If this brief introduction has caught your interest, you can find out more in our Wahoo board game guide. 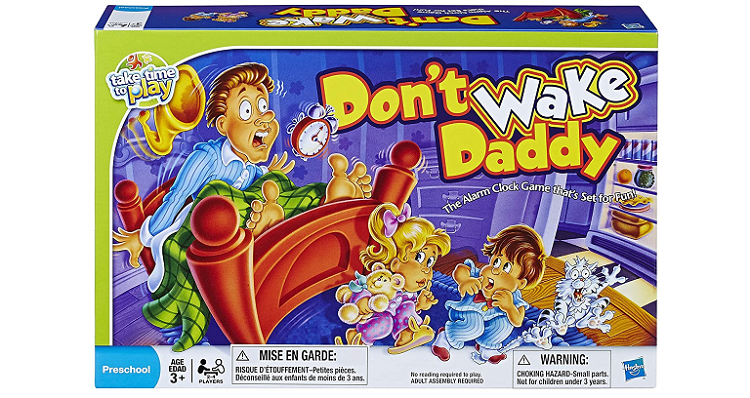 Don’t Wake Daddy is a great alternative for anyone who likes the racing aspect of Trouble but finds it somewhat lacking in terms of storyline.

The aim of this game is to reach the kitchen first, so it shares a similar structure to trouble, but Don’t Wake Daddy is set in a house, and each player takes on the role of a child sneaking around within that house, so it’s much less abstract.

Learn more about Don’t Wake Daddy, including how to play. 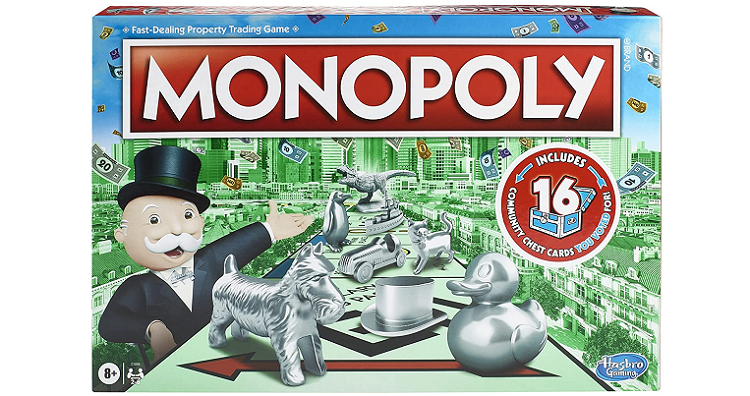 If you want a game that demands a little more strategy, this is my recommendation. Monopoly is a classic property-trading board game that’s infamous for being brought out during family gatherings (and sometimes causing arguments – but that’s just because the game is so competitive!).

It’s definitely aimed at a slightly older audience, but it does have a fairly wide appeal.

Read our full Monopoly board game guide if you’d like to know more.

Trouble – is it Worth Buying?

As far as family games go, this is one of the best. It doesn’t cost much to buy, so you won’t be taking a gamble, and the amount of fun you get from playing it will far outweigh the initial price.

I can’t stress enough how much I enjoy playing Trouble – something which initially surprised me since I often favor games that are more complex. I was hesitant at first and definitely skeptical – after all, the game has no discernible storyline and is very abstract – but soon enough, my competitive side kicked in, and I couldn’t get enough.

The same can be said for the rest of my family and pretty much everyone I’ve ever introduced to the game.

Personally, I do think if your family has slightly older children then Wahoo could be a better option – only because it includes more opportunity for strategizing – since Trouble has clearly been designed with young families in mind (the Pop-o-Matic dice roller is a fantastic idea).

Question: Can I Play Trouble Solo?

Answer: Unfortunately, it isn’t possible to play Trouble with just one player, but we have a guide to the best solo board games that you can read to find a more suitable option.

Question: Where Can I Purchase Trouble?

Answer: You can buy the game on Amazon here.

Question: Can I Jump Over Another Player’s Piece?

Answer: Yes, as long as you don’t land in precisely the same place as their piece. The position their piece is in still counts as one move along with the board.

Question: What if I Land in the Same Place as Another Player’s Piece?

Answer: This is the fun part – they have to send their piece all the way back to the start, and your piece occupies the space instead.

Question: Is Trouble Suitable for Teenagers?

Answer: Trouble is the kind of game that can be enjoyed by people of all ages, including teenagers, though it’s mainly marketed to younger children and families.