Aggravation is a classic race-around-the-board game involving marbles. The game’s simplicity is part of what gives it such a broad appeal – it’s easy to learn and easy to play, but that doesn’t make it boring! Quite the opposite.

The design of Aggravation has seen a number of changes over the years, but the premise remains the same: making it to the finish line before your opponents. Competitive games like this, which actively encourage rivalry, are perfect for adults and children alike and make excellent family board games.

Throughout this guide, I’ll explain everything you need to know about Aggravation, starting with its origins and history before moving on to how to play. Keep your eyes peeled for tips and tricks that will help you win!

Are you ready to race? If so, gather your marbles and enjoy this ultimate Aggravation board game guide. 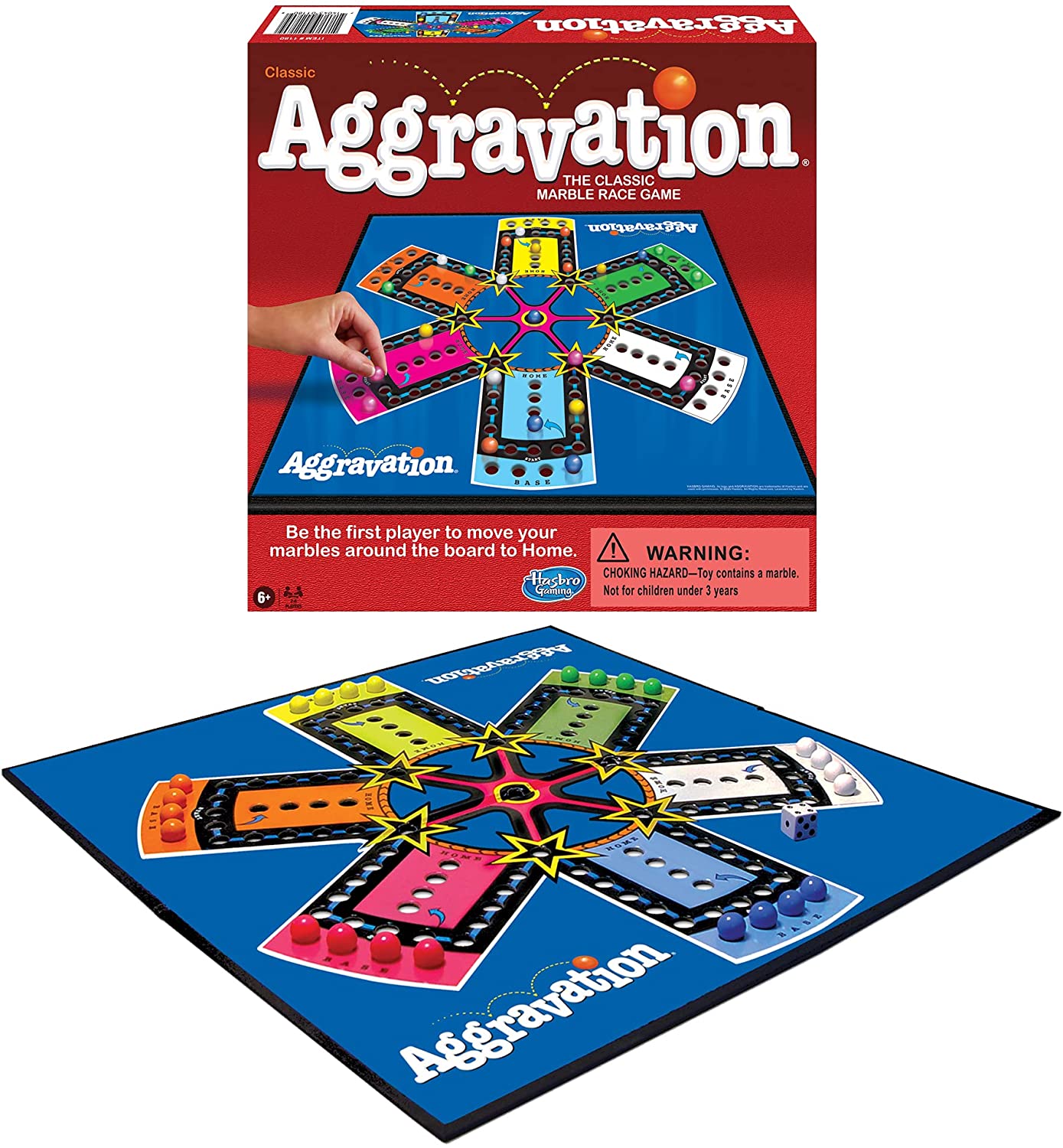 Why is the game called Aggravation, I hear you ask? Give it a go, and you’ll soon work it out when another player’s marble sends yours all the way back to the start! As frustrating as this sounds, it’s a crucial part of the game, and it’s part of what makes Aggravation so exciting.

But before I tell you any more about what makes this game great – and a few things that could be better – let’s get to grips with what Aggravation is all about.

There’s no grand backstory that you need to be aware of, unlike in some other roll-the-dice games (13 Dead End Drive or Don’t Wake Daddy, for example); as I mentioned earlier, Aggravation really revels in simplicity.

Players each have four pieces to move around the board – in most instances, these pieces are marbles, but there are many variations of the game out there, some of which might use different objects. The idea is to get all four pieces from the start to the finish line before anyone else.

Sounds simple? Well, a few rules make Aggravation a little more challenging than it first appears. You can’t, for instance, pass your own pieces as you move around the board, and if you land on another player’s piece, they have to move that piece all the way back to the start.

Aggravation is available today from a number of different publishers, including Hasbro, Milton Bradley, and Winning Moves. However, it was first created by BERL Industries in 1962 and sold for just one penny in royalties per game. The children and grandchildren of the game’s original creators still possess the rights to all game boards and sales.

Though Aggravation first hit stores in the 1960s, its origins can actually be traced back much further than this to a game called Pachisi that was popular in India at around the time the global calendar moved from B.C. to A.D.

Like Aggravation, Pachisi boards also consist of a cross-shaped path that players need to navigate to arrive at their final destination.

Handmade versions of Pachisi existed for thousands of years – and the tradition of making boards continues with Aggravation today – until the American game manufacturer, Selchow and Righter, began producing a mass-market version in 1874, which they called Parcheesi.

In many ways, Aggravation can be understood as a streamlined version of Parcheesi. The former accommodates up to six players, while the latter game only accommodates up to four. However, there are other differences between the two.

In Parcheesi, two dice are rolled at the same time by a player, differentiating the game from many other cross and circle board games. In Aggravation, only one die is used, and the pieces that move around the board are marbles.

Ludo, an extremely popular game in the UK, is almost identical to Aggravation.

With so much history behind it, Aggravation has undoubtedly undergone a few facelifts over the years. The edition that is most widely available today has been updated with bright primary colors to match contemporary tastes, making it more appealing to young children.

The board itself is simple: an asterisk-shape with six colored prongs sits against a bold blue background.

However, there’s a lot of choice out there when it comes to the game’s design, thanks to the unique tradition of hand-making boards. A quick search on Amazon or eBay brings up lots of different designs, many of which have been lovingly hand-crafted using solid, high-quality wood.

The aim of the game is simple: be the first player to move all four of your marbles from Base to Home.

How to Play Aggravation

Aggravation is a simple game that’s all about fun rather than complex strategy. It shouldn’t take more than five minutes to set up. 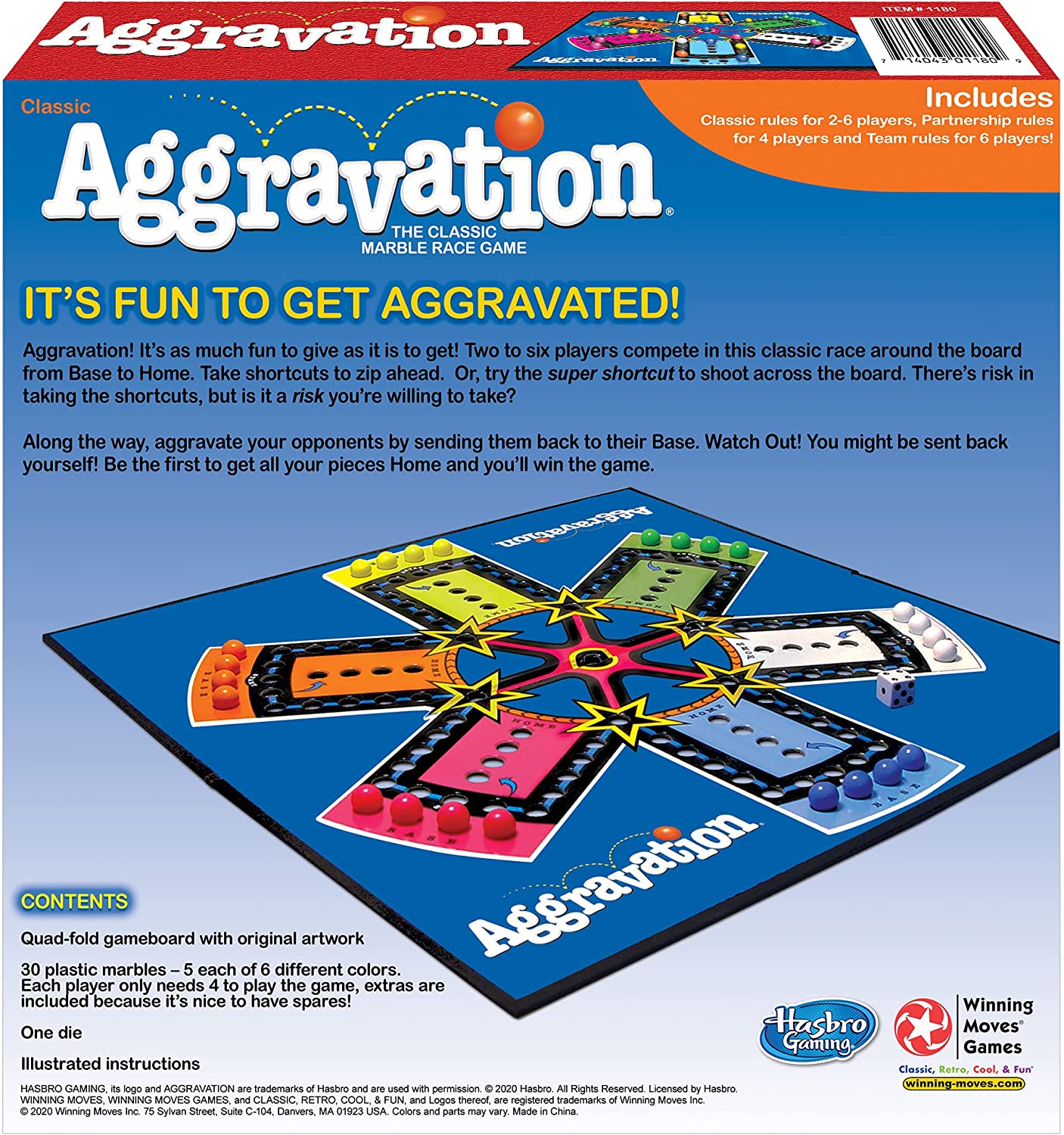 There are only three steps involved in setting up a game of Aggravation, making it perfect for parents who want a quick way to keep their kids entertained with minimal mess or fuss.

Roll the die and try to start or move one of your marbles to begin a turn. Rolling a six automatically earns you another turn.

Your marble can’t travel around the board until you have moved it from your Base to the Start position. To do this, you’ll need to roll either a one or a six.

Once you have started a marble as described above, you can take another turn, but only one marble at a time can occupy your Start space. 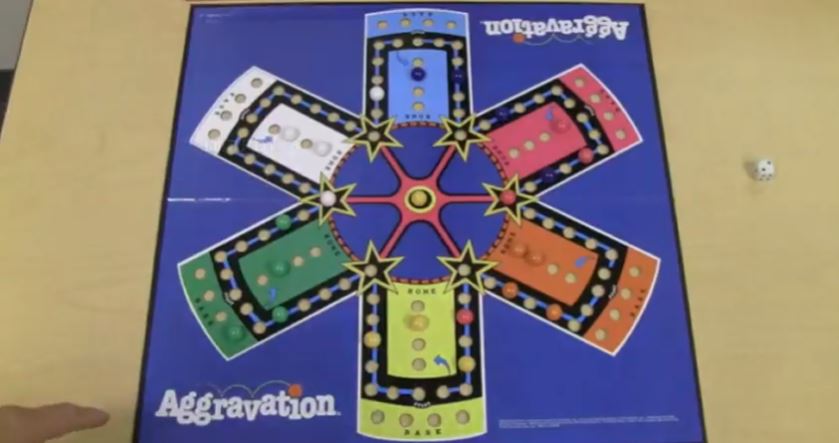 Your marbles should move in a clockwise direction along the path, always to the full die count. If in doubt, follow the solid arrows on the board.

After you’ve started one or more marbles, whenever you roll a one or six, you are permitted to either start a new marble or move another one.

However, you’re not permitted to jump over or land on your own marble. If another one of your marbles is preventing you from moving the full die count, you simply can’t move the blocked marble. And if you can’t move any of your marbles at all, leave them where they are. It’s the next player’s turn.

After you’ve been aggravated, you’ll have to start your marble all over again as you did at the beginning of the game.

The only areas where marbles can’t be aggravated are on their Base and Home areas.

Star spaces and the Center space can be used as optional shortcuts back to your Home area. Be careful, though – your opponents can still aggravate you in these spaces!

When your marble lands on a Star space by exact count, you can move it clockwise around the Star spaces on another turn according to the number you roll on the die. You can exit the Star spaces onto any path, but ideally, the one that leads to your Home.

The Center space, on the other hand, represents a super shortcut. If you land on it by exact count, you can use it as a shortcut to any Star space.

When you land on the Center space, the only way off is by rolling a one on another turn.

Getting Your Marbles Home

Now for the most crucial part of the game: getting your marbles home. To do so, you need to move them into any one of the four spaces in your Home area by exact count.

Be the first player to get all four marbles safely into your Home area, and you win! But remember, you have to do this by exact count, and you can’t jump over or land on any of your own marbles.

Who is Aggravation for? 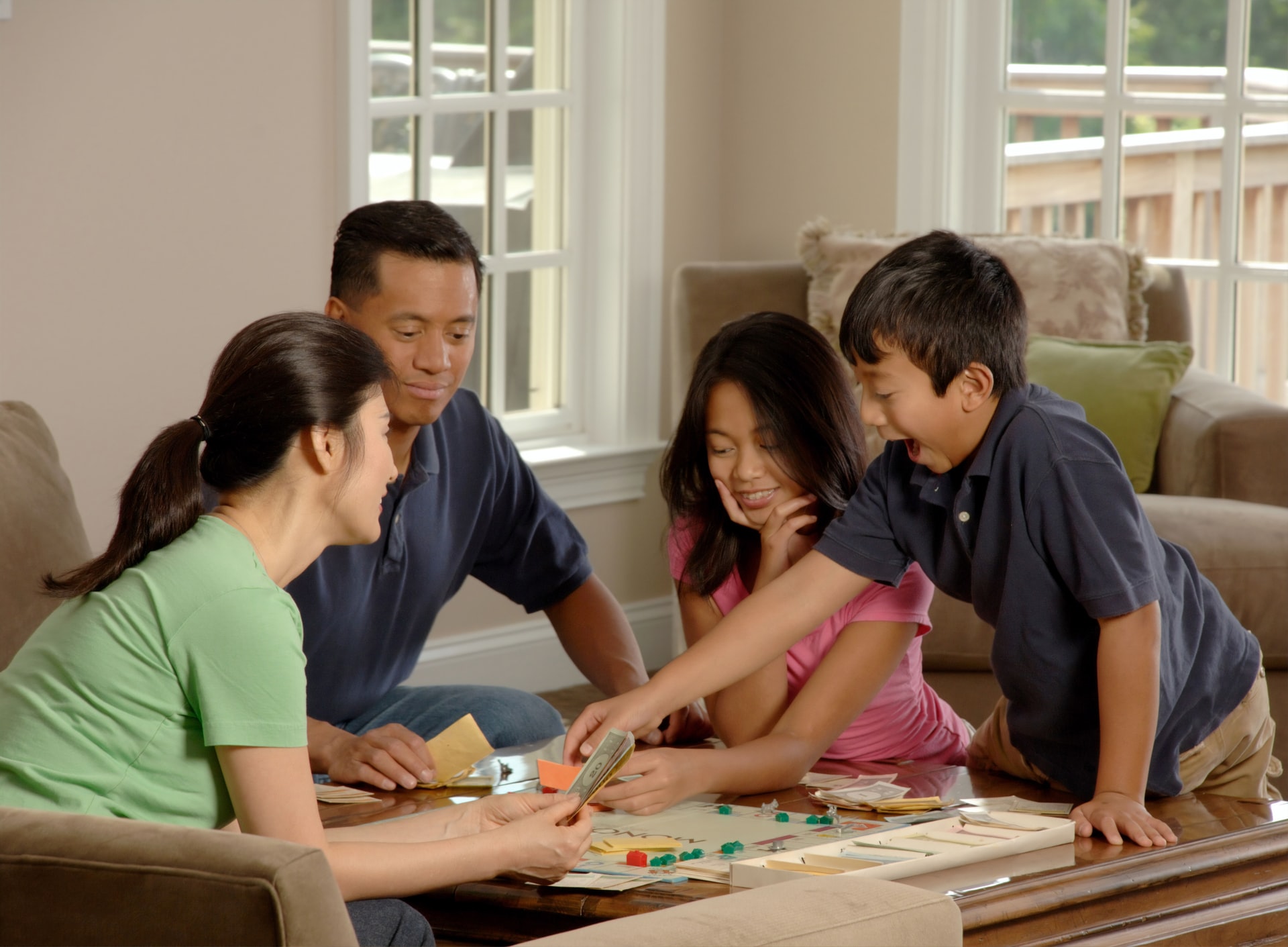 Aggravation is recommended for two to six players aged six and above.

There isn’t really any complex strategy involved in the game, so that’s definitely something to be aware of if you prefer board games that demand careful thought. However, what Aggravation does offer is lots of fun for all ages.

A game of chance, though, it might be, but boring it certainly isn’t! So if you’re looking for a suitable game for the whole family, I’d highly recommend this one.

The thing that I love about Aggravation is how competitive it gets, especially when another player manages to keep aggravating your marbles just as you’re on the home straight.

Indeed, it isn’t the sort of game you can repeatedly play without getting bored, but it’s a firm favorite for those occasional family get-togethers.

How Many Pieces are There in Aggravation?

There aren’t all that many components involved in this board game – which is excellent news for anyone who’s prone to losing small pieces! Here’s what you can expect to find in the box:

Are you looking for a few alternative board games? Below I’ve included a few of my favorites. 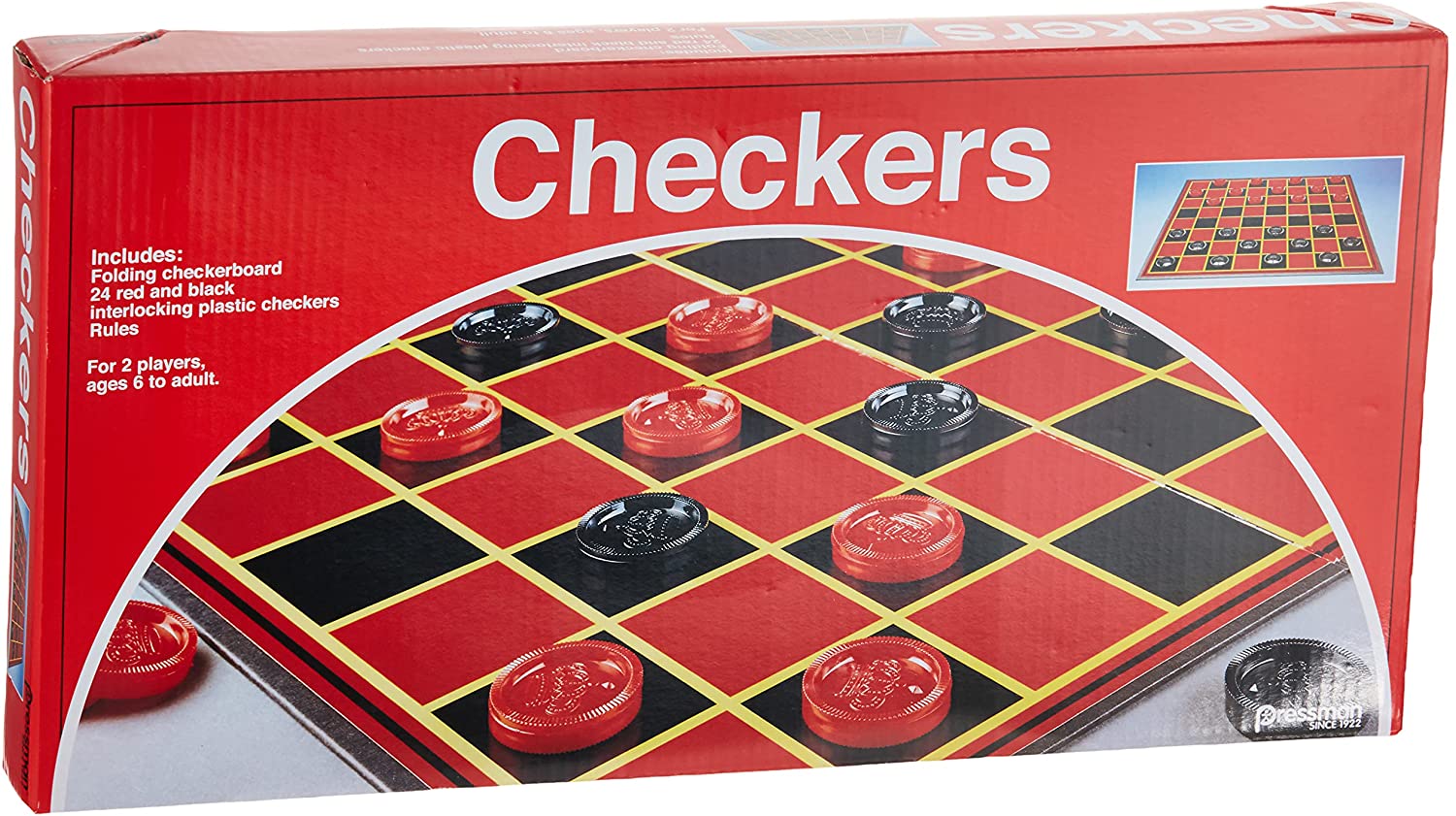 Checkers feels like the less colorful, grown-up version of Aggravation – though it can be enjoyed by children. It’s a two-player strategy game consisting of a 64-square checkerboard and 24 checkers, which can be moved across the board according to a set of rules.

The aim is to move across the board and remove your opponent’s pieces by jumping over them. 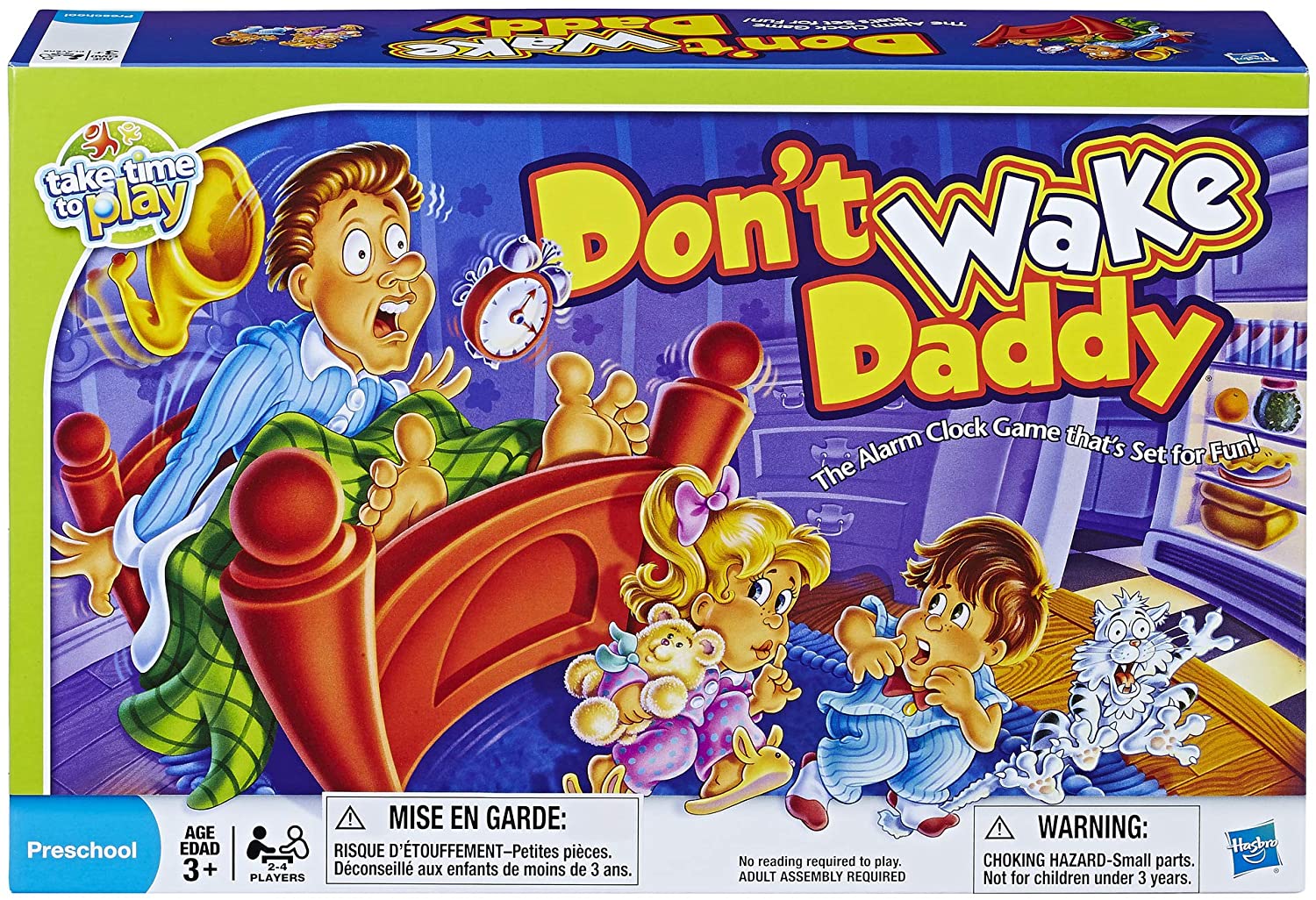 Like Aggravation, Don’t Wake Daddy aims to get from one place (your bedroom) to another (the refrigerator in the kitchen) while avoiding various hazards and threats along the way. Most importantly, you need to keep quiet, so you don’t wake daddy! 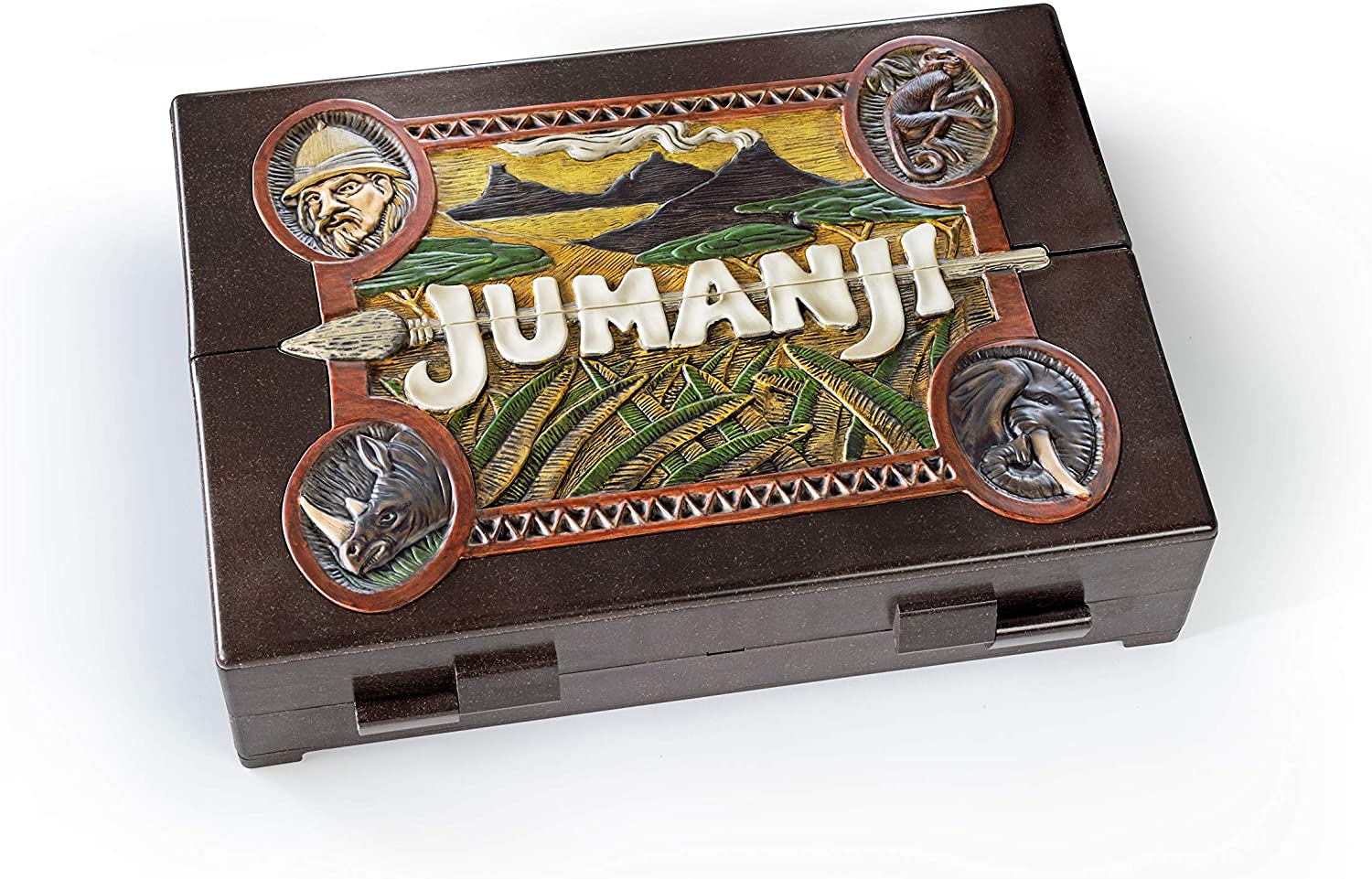 You might already be familiar with the classic Jumanji movie; if so, you’ll be delighted to find out that there is now a board game as well! Watch out for the dangers of the forest and reach the Jumanji space before your opponents.

Find out more about this epic game in our ultimate Jumanji board game guide.

Aggravation – is it Worth Buying?

The answer to this question depends on what sort of board game you’re looking for. I won’t pretend that Aggravation is a thrilling, action-packed game that’ll keep you on your toes no matter how many times you play it because that simply isn’t true.

But what I will say is that Aggravation is, in my opinion, the perfect family game. The bright colors and easy-to-follow rules will keep even young kids engaged, yet the game has clearly been created with a wider audience in mind; it’s good fun whether you’re eight or eighty.

The fact that Aggravation has existed in various forms for many hundreds of years tells you everything you need to know. Its enduring popularity is astounding.

Question: How do you play Aggravation in teams?

Answer: For four players (with two in each team), start by having your partner sit opposite you. The same rules apply with a few exceptions:
• You can jump over your partner’s marbles, but if you land on one of them, you aggravate it
• If you get all four marbles Home, continue to roll the die when it’s your turn. Your partner moves their marbles according to your die rolls.
• To win, get all eight marbles Home first!

Question: Where can I purchase Aggravation?

Answer: You can buy Aggravation on Amazon here.

Question: What are the dimensions of the board?

Question: Do all versions of Aggravation include marbles?

Question: Can you play Aggravation solo?

Answer: The minimum number of people required for a game is two unless you want to play against yourself and take two turns per go.
If you’re looking for a game you can play on your own, check out our guide explaining how to find the best solo board games.