Ready for the adventure of a lifetime? In Lost Ruins of Arnak, you can travel, explore, discover, and build…all from the comfort of your own home.

Uninhabited islands have captured the imagination of civilizations past and present, with a wide array of novels, TV shows, and movies emerging.

In particular, fans of the 2004 TV series Lost will find Lost Ruins of Arnak a welcome addition to their arsenal of games since the two share a reasonably similar premise.

Lead an expedition to explore the island, uncover ancient artifacts, and face fierce guardians as you attempt to uncover the secrets of the mysterious land in this deck-building and worker placement game.

There’s just one question: can you use your turns effectively to continue learning more about the island, or will the rival expedition group discover the lost ruins before you?

Lost Ruins of Arnak: an Overview 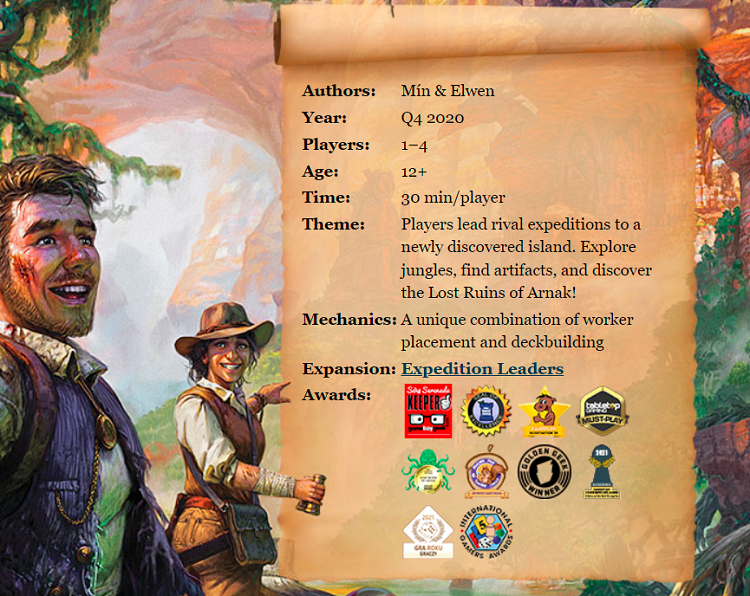 Lost Ruins of Arnak is a deck-building adventure game that was released in 2020 by Czech Games Edition. In fact, it ended up being one of the hottest games that year!

According to the dynamic duo Min and Elwen, who are credited with designing the game (and have also been married for several years), Lost Ruins of Arnak takes heavy inspiration from Jules Verne and Indiana Jones.

The couple was also inspired by their favorite games, Ascension and Lords of Waterdeep. Still, they wanted to create something new that combined two very different game structures: deck building and worker placement.

Though Min and Elwen encountered numerous obstacles when they tried to make these two mechanisms work together harmoniously, they ultimately succeeded by opting for what they call “micro turns,” – meaning each player is limited to one action per turn.

The result of this experiment is a highly accomplished game that has had a profound impact on the industry. Notably, Lost Ruins of Arnak won Medium Game of the Year at the 15th annual Golden Geek Awards and was also runner up for Best Artwork Presentation.

There are hundreds of different strategies to choose from when it comes to exploring Arnak, from carrying out research to finding resources and mapping out various temples. It’s entirely up to you how you choose to approach the game, which is one of the best things about it, in my opinion.

The History of Arnak

One of the things that makes Lost Ruins of Arnak such a special game is the level of thought and detail that went into its design. The harder you look, the more there is to find, with plenty of backstory being provided by the artists and designers.

Before the concept of Arnak became a real game, Min created a detailed document titled “The History of Arnak,” in which she began setting out a detailed history for the fictional island.

Likewise, artist Ondrej Hrdina created beautiful sketches depicting scenes from Arnak’s past. Together, they created a rich tapestry of culture, which defined their understanding of the island as they set to work on the actual board game.

In one interview, Min recalls the sheer level of detail they went into, describing the island’s unique geography; its climate; its flora and fauna; the people who used to inhabit it; their myths; their lifestyles; and their beliefs.

The hard work that went into creating Arnak is reflected clearly in the game’s design. 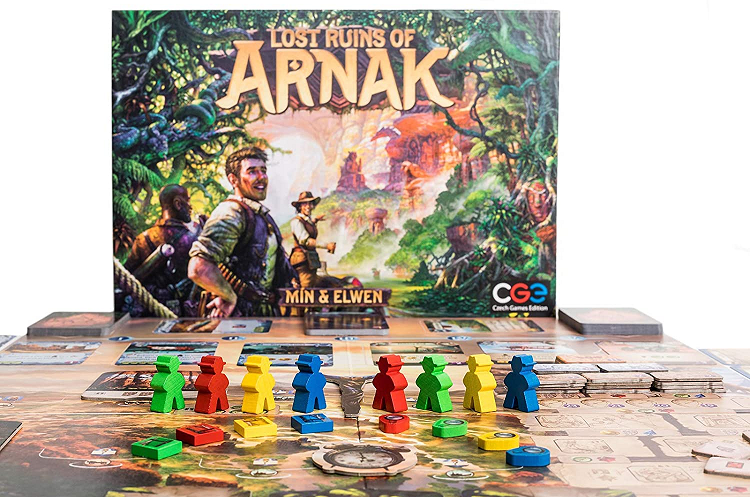 The earthy, muted colors of the board and its components reflect the history of the island; it’s clear that there are ancient secrets afoot, and the design of the instruction booklet, which looks like an antique leather-bound journal complete with sepia photographs and handwritten notes, reinforces the mysterious atmosphere of the game.

In contrast, the supply board and player boards are vibrant, showing off the island’s resources if only one looks closely enough.

If you like the well-thought-out design of Lost Ruins of Arnak, I’d also recommend King’s Dilemma and Sleeping Gods.

As expedition leader, you must lead your fellow explorers across the island of Arnak with the hope of uncovering secrets from ancient civilizations.

As you progress, you can carry out many different tasks, such as equipping your expedition and uncovering important archaeological sites from ancient civilizations. Still, your ultimate aim is to discover the lost temple of Arnak.

Each accomplishment you make earns you points; these points are added up at the end of the game to determine the winner.

How to Play Lost Ruins of Arnak

Are you ready to venture across the dense jungles and golden sands of Arnak? Here’s how to play! 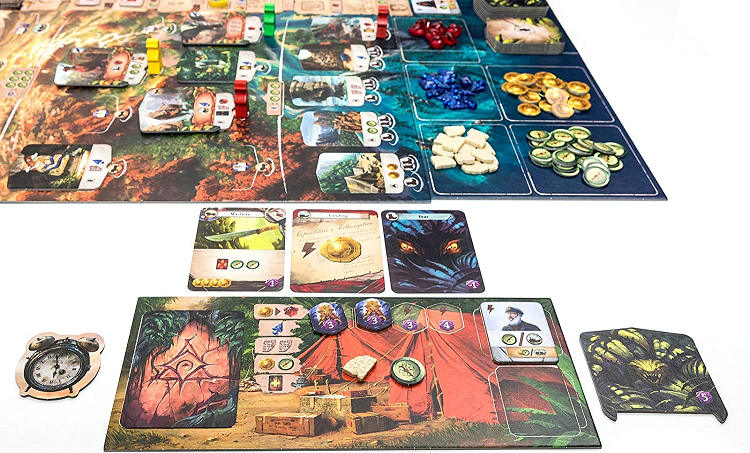 First of all, each player should select a color and take the following pieces that match that color:

Each player has a starting deck; each deck is the same, to begin with, containing:

Start by shuffling your deck and placing it face down on your player board.

The player who most recently traveled to a place they have never been before should start the game. Give them the starting player marker – play then continues clockwise. 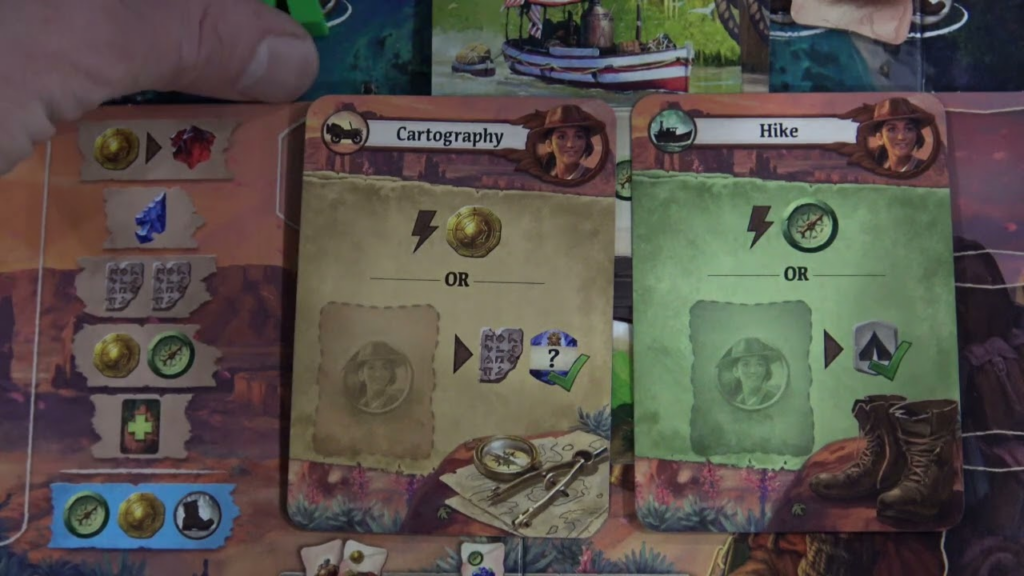 The game consists of five rounds in total. Each turn, players choose what action they want to pursue; as the game progresses, more of the island will be explored and subsequently revealed.

You can choose one of the following actions when it’s your turn.

Dig at a site – pay the travel cost that’s written on the space where you want to send your archaeologist, then resolve the effect depicted at the site.

Overcome a guardian – you need to already have an archaeologist on the guardian’s site. To overcome them, pay the cost depicted on the tile and remove the guardian from the board.

Buy a card – choose whether to buy a card or artifact. In both instances, you have to pay the price indicated on the card, either putting the item face down at the bottom of your deck (in the case of a card) or moving the artifact to your play area.

Play a card – play the card face-up from your hand, resolving its effect and leaving it in your play area for the remainder of the round.

Research – decide which research token to move. It’s important to be aware that your notebook must never move to a row above your magnifying glass. Choose a space to move into that is connected to your current space and pay the cost before gaining the results of your research.

Pass – when it’s your turn, you can choose to pass, which counts as the main action of your turn. If you take no other main action you have to pass, you get no more turns for the remainder of the round.

Specific rules can send cards into exile, which can be found at the top of the main board. Besides fear cards, exiled cards don’t usually come back into play.

When your magnifying glass reaches the top row of the research track, you have finally discovered the Lost Temple! Of course, the sooner you reach this point, the more points you earn.

Place your magnifying glass on the final empty space, worth the most points. After this, take a bonus tile of your own choosing.

You can now use later research actions to discover the stories of Arnak!

Assistants are people who are involved in your expedition. Each assistant has two levels: silver and gold. As you might have guessed, the latter has the stronger effect. The research track will provide you with silver assistants when you move your notebook token to specific rows.

You should move it sideways; this shows that the assistant is exhausted and not available. Generally, assistants have one effect, which can be used only once per round.

Setting up the Next Round

All players should do the following:

At the end of the final round, all players take back their archaeologists and gain fear from the guardians. Then, proceed to the final scoring; whoever has the most points wins.

Who is Lost Ruins of Arnak For?

Lost Ruins of Arnak is recommended for one to four players aged twelve and above.

The game itself is quite complex, with lots of different rules and scoring methods to be aware of, so this age range is appropriate, in my opinion.

I wouldn’t necessarily call it a family game because it takes quite a long time to get to grips with how to play. Still, it definitely has the scope to appeal to a wide range of board game enthusiasts, particularly those who enjoy the adventure genre.

How Many Pieces are There in Lost Ruins of Arnak?

Here are all the components included in the game:

Alternatives to Lost Ruins of Arnak

Here are some other games I’d recommend trying if you like the sound of Lost Ruins of Arnak. 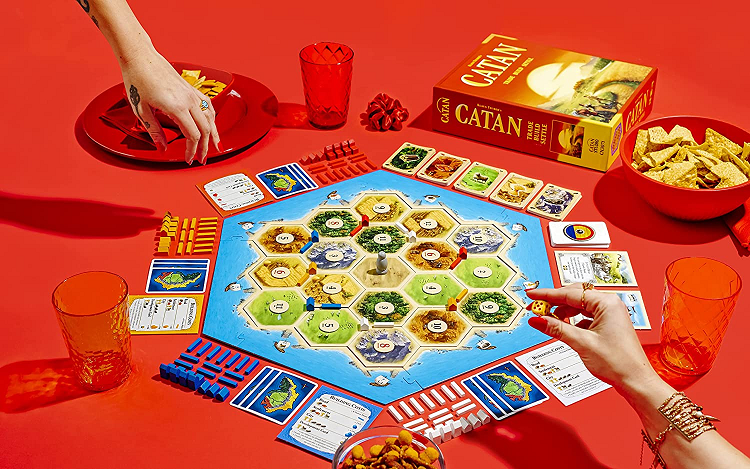 Settlers of Catan is arguably one of the most successful board games of all time, with more than 30 million copies sold worldwide. Like Arnak, it involves settling on an island. Still, instead of gathering ancient secrets, the aim is to build a thriving civilization.

Want to know more? Read our Catan Board Game Guide. 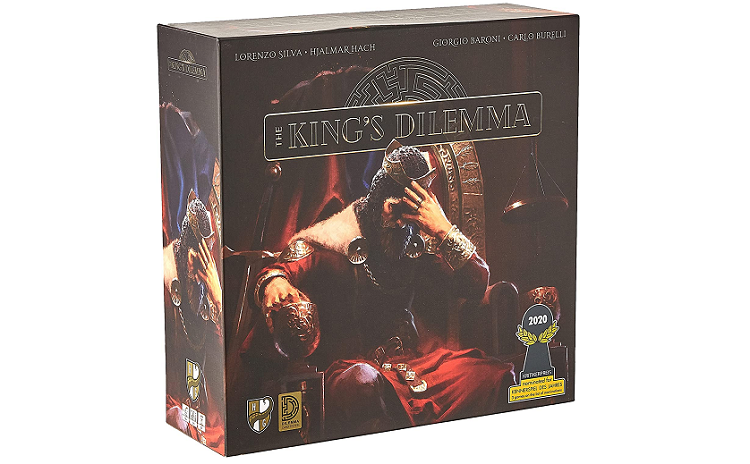 If you love the level of thought and detail that has gone into creating Lost Ruins of Arnak, I guarantee you’ll enjoy King’s Dilemma. In this legacy board game, the aim is to influence the decisions of the King to bring about your own agenda. Like Arnak, worldbuilding is astounding.

We have a King’s Dilemma Game Guide covering all the information you need.

Lost Ruins of Arnak – is it Worth Buying?

Lost Ruins of Arnak doesn’t necessarily bring anything new to the adventure genre – other than its creative inclusion of deck building and worker placement mechanisms – and this has led to the game being overlooked by some members of the gaming community.

In my opinion, this is a huge shame because the sheer amount of creativity poured into the game’s design and the story is astounding.

There is something very special and totally unique about Lost Ruins of Arnak. The game is gripping – even if the gameplay can be a little tough to get your head around – and despite the slightly unoriginal premise, I’d go as far as to claim that no other board game has managed to execute this idea so successfully.

Would I recommend Lost Ruins of Arnak? Absolutely.

Question: What is a Deck-Building Game?

Answer: A deck-building game refers to any card or board game where you build your deck as you play, and each player has his or her own deck.

Question: What is a Worker Placement Game?

Answer: In this type of game, each player has a team of workers who they can deploy to carry out different actions.

Question: Can I Have More than Five Cards in my Hand?

Answer: The hand limit only applies when you first draw your cards, so it’s entirely possible for you to end up with more cards throughout the game.

Question: Am I Allowed to Shuffle my Deck During the Game?

Answer: This isn’t allowed; you can only shuffle your deck when you start the game.

Answer: I’d say it depends on the age of your family; there are a lot of rules to follow, and it can take a while to get to grips with the game at first, so I’d recommend the game to families with older kids and those who have a lot of time for playing.

We also have a guide that will help you find the best family board games.