Wahoo, also known as Aggravation, is one of those classic board games that feels like it’s been around forever, and it’s hardly surprising that it has endured since the early to mid-1900s given how simple but intense it is to play.

In this guide, I’m going to explain everything you need to know about Wahoo, including the origins of the game, how to play, and who it’s for.

Wahoo is a simple board game featuring a board (often wooden, sometimes card), sixteen marbles, and four dice.

It can be played by four to six people and has an average playing time of forty-six minutes. The original version, popularized in the American Southwest, has a Native American theme that some have since deemed offensive.

This version is still available from Wahoo Games.

A more recent iteration of the game, made by Hasbro, is Aggravation. It is played by the same principles but has a more generic design. 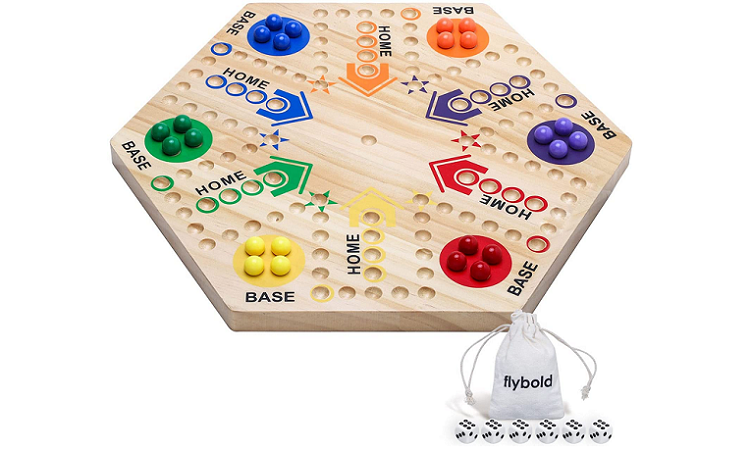 The aim of Wahoo is to be the first player to move all their marbles around the board and into the home (also known as the safety area).

To move your marbles into the safety area, you must roll the exact number that you need on the dice. If you don’t roll the correct number, you’ll have to try again on your next turn.

The History of Wahoo

There have been various iterations of Wahoo over the years, originating from different cultures and themes.

For example, one version in the 1990s, which Traditional Game and Toy Company trademarked, had a Native American theme, deemed by some to be offensive. It is still available today but much less widespread than it once was.

A more popular, modern version can be found on Amazon in the form of Aggravation. This is a slightly simplified version of the original, but the game is still played in essentially the same way.

Both are cross and circle board games requiring players to move several marbles around the board in an attempt to get them in the safety zone.

Allegedly, Wahoo is said to have originated in the Appalachian hills, but it is very similar to Parcheesi and almost identical to a German board game from 1907 called Mensch Ärgere Dich Nicht.

Today, many beautiful, hand-made boards are available to buy on Amazon, proving that Wahoo has successfully shed allegations concerning its offensive nature by changing with the times.

How to Play Wahoo 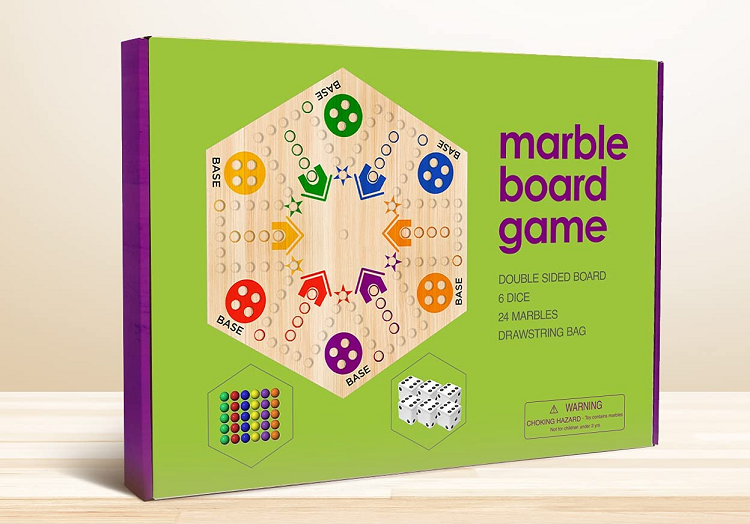 Ready to start playing Wahoo? Fortunately, this game is pretty easy to pick up, so you should get the hang of it in no time!

Each player takes four marbles of the same color to set up the game. These marbles then need to be placed at the starting arrow of the corresponding color.

Next, each player rolls the die to determine who begins the game. The player who rolls the highest number starts and the game is played in a clockwise fashion.

In the event that one of the players rolls a six, they are allowed a second turn, and if this happens again a second time, the same thing happens. This could, in theory, continue indefinitely.

Marbles move around the path of arrows in a clockwise direction. The number of spaces they move is determined by the number rolled on the die.

As the game continues, players can jump their marbles over any other marbles that are in the way, but if one player’s marble lands in the same space as their opponent’s, the opponent’s marble should be removed and placed back in the starting position.

It’s important to remember that a player must never land on their own marbles. If a number is rolled, which prevents a marble from moving, the player who rolled the die must forfeit their turn.

As previously mentioned, the winner is the first player to move all their marbles into the teepee (in the American Indian edition of the game) or the finish line.

Many play variations have developed over the years, one of which is playing as partners. Players decide on a partner and sit opposite them across the board to do this. The same rules apply. However, there are a few slight variations to be aware of.

Another way to play the game is as follows:

Nova Scotia also has a variation, which is played with cards instead of dice. This game uses a six-sided board. Swapping marbles for cards makes the game considerably more complex, so once you’ve mastered basic Wahoo, it’s with giving this variation a go.

Who is Wahoo For?

The makers of Wahoo do not recommend the game for any specific age group; rather, it is the kind of board game that has a widespread appeal.

Due to the marbles presenting a swallowing hazard, it’s a good idea not to allow children under five years old to play the game, especially unsupervised.

The original American Indian version of the game is particularly appealing to anyone who has an interest in the American Southwest and cowboys. The design of the game is colorful and likely to appeal to children.

However, Wahoo can be a fun game for people of all ages. It makes a particularly excellent family game because everyone can get involved, and the game is simple and short enough that it isn’t likely to cause arguments – unlike, famously, Monopoly.

How Many Pieces are There in Wahoo?

The original Wahoo game comes complete with the following pieces:

Other versions of the game, notably Aggravation, may come with more marbles depending on how many players the board is designed to accommodate.

Other Traditional Board Games

If you like traditional board games that evoke a hint of nostalgia when you play them, here are my recommendations. 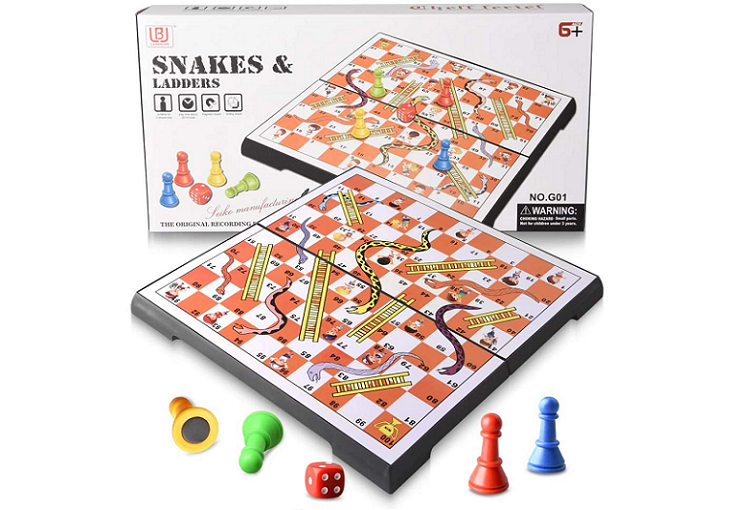 This classic board game originated in India many thousands of years ago, but today it’s a real worldwide hit that’s instantly recognizable. Like Wahoo, Snakes and Ladders is played with a die that controls where the pieces move on the board.

Landing on a ladder will help you advance your position further while landing on a snake sends you backward. The aim of the game is to reach the final square. 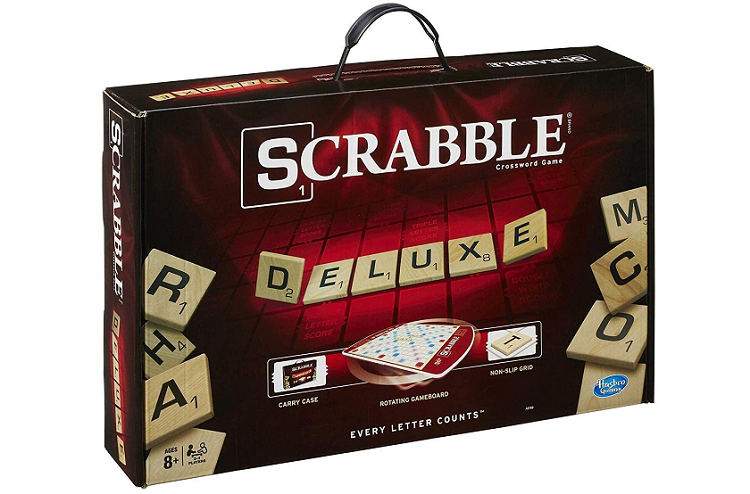 Scrabble is a little more serious than Wahoo, but it’s a traditional board game nonetheless. The aim of the game is to score more points than your opponent by creating better words from your randomly chosen letters.

Each letter has a different value, and the board is a grid containing certain squares that allow you to score double or triple points on a letter or word.

If Wahoo doesn’t entirely take your fancy or you’re looking for a new game to master, you’re in the right place. Here are my recommendations for the best alternatives to Wahoo.

Checkers, also known as draughts in many countries, is one of the world’s oldest games. Players face each other across a board of 64 black and white squares, much like a chessboard.

The pieces look like small discs, and the aim of the game is to capture all of your opponent’s pieces. This might not sound all that exciting, but the reason checkers has endured for so long is thanks to the strategy and thought that is required to truly master the game. 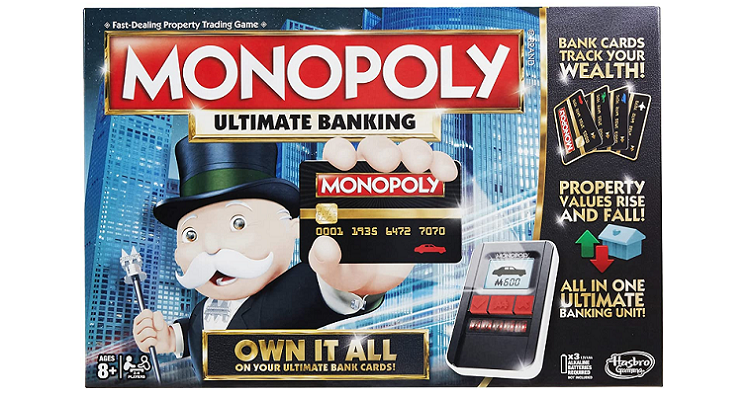 Like Wahoo and Checkers, players attempt to move around the board faster than their opponents in Monopoly. However, there is much more going on, making this a game that requires strategy but is also extremely fun to play for families.

It is a real-estate board game, the aim of which is to remain financially solvent while forcing your opponents into bankruptcy. As such, you win the game by being the last player standing. Find out more about the game here.

Wahoo – Is It Worth Buying?

Overall, Wahoo is a game that’s best played as a family thanks to its easy-to-follow rules and simple setup.

I’d definitely recommend it for young children, but for older children or adults, it can quickly become repetitive, and it lacks the kind of strategy that makes for an engaging and challenging game.

However, thanks to the Nova Scotia version, which uses cards instead of marbles, it’s easy to make the game more complex, so even if you prefer games that involve a bit more thought and strategy, it’s still worth buying.

Question: Is Wahoo the Same as Aggravation?

Answer: Yes, both games are the same and follow the same rules. There are sometimes slight variations between the two depending on where you purchase them, but they focus on moving marbles around the board.

Question: How Many Sixes Can be Rolled Consecutively?

Answer: There is no limit to the number of sixes that can be rolled, and each time this happens, the player gets another go.

Question: Can a Player Jump Their Own Marbles?

Answer: It entirely depends on how you want to play. Some families allow this, while others do not. Decide how you want to play and stick to this rule.
Some people allow players to jump over their own marbles everywhere except the teepee area to add an element of difficulty.

Question: When Was Wahoo Invented?

Answer: Variations of Wahoo have existed for many years, but in a recognizable modern form, it can be dated back to the 1960s.

Question: Are There Any Other Games That are Good for Young Children?