Monopoly is one of the most classic games you’ll find throughout the years. Today, Monopoly has various themes to choose from depending on your age, hobbies, etc.

Through my years of playing board games at local meet-ups, I’ve seen and tried various games (including games in the works). As a result, I’ve created this Animal Crossing Monopoly guide to help you learn about the game, how to play, and other tips along the way. So read on to explore this complete guide on this fantastic game!

What is Animal Crossing?

Animal Crossing is a social video game series from Nintendo. You start off as a human on an island with different animal residents.

You can search for fossils on the island, catch bugs, and go fishing. Then, you can take your different finds to the museum to showcase the various items you find.

Depending on your items, you can also build different things and either sell them or decorate the area. When you go “online,” you can chat with your friends through the Nintendo App while you play.

Animal Crossing has actually been around for years before the newest addition to the switch. Today, you can play Animal Crossing on various Nintendo devices. 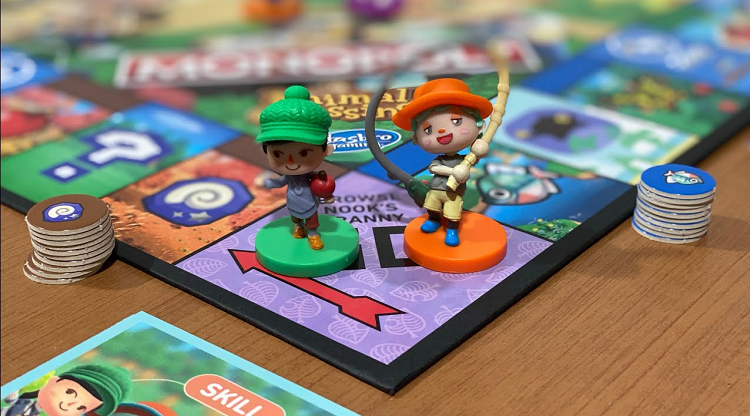 The Monopoly Animal Crossing New Horizons Edition Board is a newer game for those who enjoy Monopoly or Animal Crossing. However, it’s still the classic Monopoly that you know and enjoy, but with a twist.

You can collect resources, visit islands, collect fruit, fossils, fish, and bugs in the game. You can also earn Nook Miles, buy decorations, and receive resources similar to the Animal Crossing game!

Included with the board are skill cards. Unlike the regular game of Monopoly, where you earn money when you pass Go, you receive a skill card. The skill card allows you to use an ability for the rest of the game. You can also head to Nook’s Cranny shop to buy different decorations.

There are also Monopoly tokens. These are Animal Crossing inspired pieces that you’ll move around the board with.

Keep in mind that you must be eight years or older to play. It’s honestly perfect for a family game night since everyone can get excited as they see several references to the Animal Crossing New Horizons game.

As you go through this list, it’s a good idea to make notes. I’ll provide plenty of strategies and how-tos throughout this guide. My goal is to make sure that you know as much as possible about Animal Crossing Monopoly from this guide!

Keep in mind that there’s no player elimination like the classic Monopoly game. So you’ll want to earn Nook Miles whenever possible.

To do this, you can complete different tasks or buy furniture. When you pass Go and head to Nook’s Cranny, you’re allowed to buy three furnishings.

As soon as you receive seven pieces of furnishings, the game is essentially over. Each player will get to go around the board one more time. After the final go-around, they can make any final purchases.

As you go around the board, you’ll be collecting resources and trading them in for Bells. Bells are the currency of money.

Try to buy some decorations with the Bells. Each item will let you know how many Nook Miles it’s worth and how much it’ll cost you to buy it. Of course, you can always trade resources as well.

In the beginning, you’ll choose who will be the banker. They’ll be in charge of the different transactions on the island with the Bells.

Everyone begins with five of the one-point Bells and one of the five-point Bells. Then, each person receives a stack of tokens that coincides with their character (what you use to claim the islands).

You’ll take three cards with the green leaf (item cards) and place them face up. When you sell the resources, you’ll then put them back.

You can head over to Nook’s Cranny when you pass Go to buy decorations with Bells (Animal Crossing money). Decorations are worth Nook Miles. So the person who has the most Nook Miles wins.

There are several differences between the two! However, I’m pleasantly surprised because the Monopoly themes are usually very similar to the original.

Although the Game of Thrones version is also different since you have coins instead of money. Basically, the object of the game is to receive the most Nook Miles.

The original Monopoly is where you’re the last person standing; essentially, the person who goes bankrupt first loses. This game literally takes you into Animal Crossing New Horizons. The person with the most Nook Miles wins!

You don’t have to worry about paying rent or buying properties like the classic. Instead, you’ll be collecting resources such as fruit, fish, fossils, and bugs. Once you purchase these decorations, they can earn you Nook Miles. 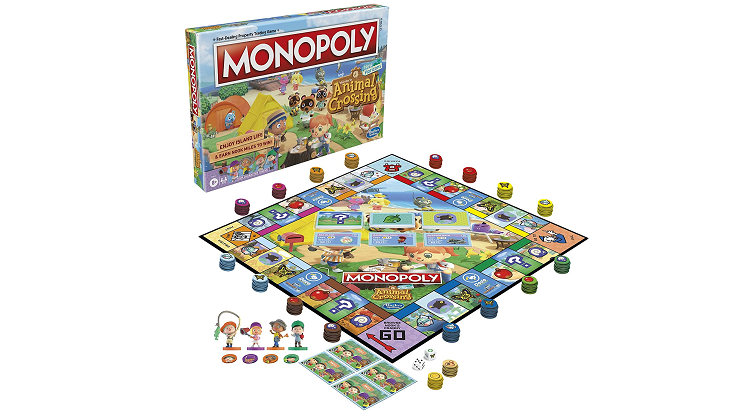 You can choose from four different characters to play. There’s a bug catcher, fisher, fruit gatherer, and fossil digger. The colors include red, purple, green, and orange.

If you land on an island first, you can place your token on it. This costs no money, and you’ll receive the resource from that island.

The resources could be fossils, bugs, fish, or fruit. So even if someone else lands on the island after you, you both will receive the resources. This makes it much different than traditional Monopoly, where whoever lands on it gets to buy it, and someone else can’t get it unless they trade it.

The board’s design overall is colorful and vibrant, like the game! You place your large tokens on the board, but they fit perfectly into each space.

There are different mystery spaces that you can land on too. Unfortunately, there’s still jail in the game.

But there’s also still free parking. In the traditional game, you’d collect whatever money is in the middle of the board.

There are no banknotes. The one downfall is since there are so many pieces, it takes a while to set up the board.

If you land on the Dodo airlines, it’ll allow you to go to any space between it and the following Dodo airlines. You’ll then need to perform the action of the area that you land on.

You receive a chance card if you land on the spaces marked with the question mark. Like the original game, they could help or hurt you.

If you land on a space with a pig, then that’s a Nook Miles card. So you could always receive more Nook Miles if you do what’s on the card.

Landing on the jail space means that you can’t go shopping at Nook’s Cranny. However, you can pay five Bells to get out on your next turn.

If you roll a six on your next turn, then you’ll get to go. Then, you’ll roll again to move ahead.

There are up to three tries to roll a six. If you don’t, then you’ll get out of jail free and take your regular turn.

Where to Buy Animal Crossing Monopoly?

You can find Animal Crossing Monopoly both on and offline. Some popular locations include Walmart and Amazon! I usually go with Amazon since it’s easy and quick to purchase anything from their site.

I’ve compiled this list to include various age ranges since that’s what Animal Crossing attracts! However, you’ll notice that many of these games will be for a similar age range as Animal Crossing Monopoly.

No list would be complete without an Avengers-themed Monopoly! As long as you’re eight years or older, then this game is for you.

This game is quite exciting since there are children of Thanos spaces. If you land on this space, you have to engage in battle.

I also love how they give you twelve tokens to choose from! They include Black Widow, Thor, Hulk, Iron Man, Captain America, Captain Marvel, Nebula, Rocket, War Machine, Ant-Man, Hawkeye, and the Infinity Gauntlet.

It’s different from the classic since you don’t buy properties. Instead, you can create a team of various Marvel heroes.

Monopoly Cats Vs Dogs Board Game 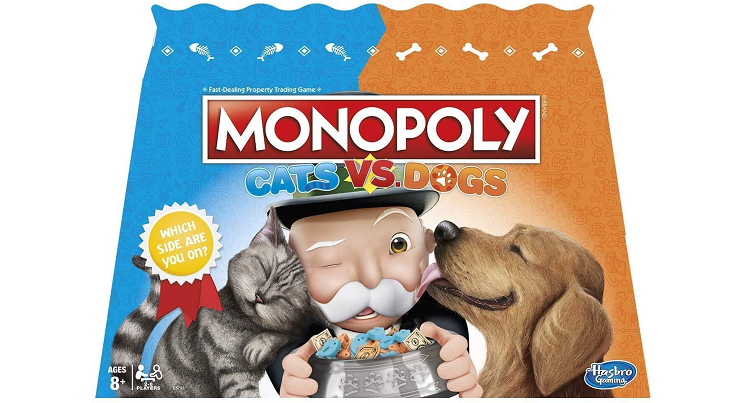 While you could buy the Monopoly Cats or the Monopoly Dogs, why not buy this instead? I love how the entire game is based on a challenge between the two to make it exciting!

This game is an exciting take on the original since you can create teams. For example, you can be team dog or team cat.

Instead of buying property, you can choose funny titles for your pets. These can include bright eyes, fashionista, and more.

There are also chance cards in play that are supposed to be funny. It’s an excellent game for two-six players for those who are eight years old and up. 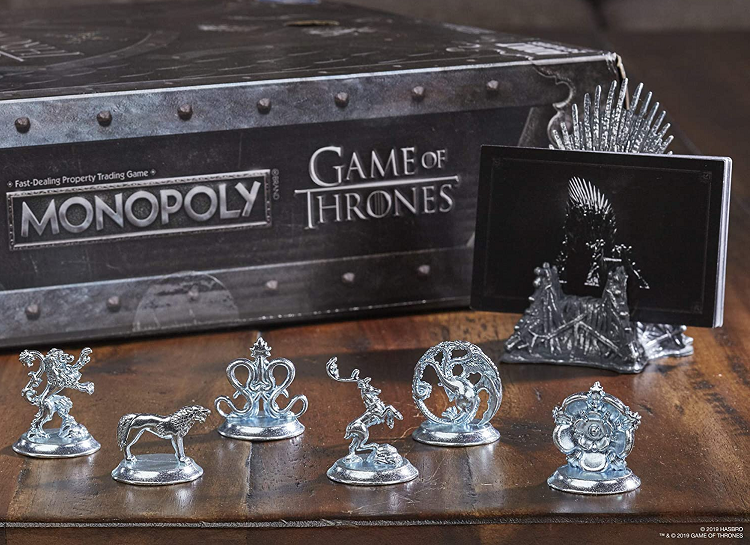 I actually loved this game! First of all, you don’t have money; you have coins.

This makes it similar to Animal Crossing Monopoly. You begin with your tokens and try to buy different towns (instead of property).

There’s still free parking where you can collect the coins in the center. This means that there’s also the fun pay if you land here spaces.

Just like the original, the chance cards could be good or bad. Some allowed you to keep them for special moves; others made you pay or collect money. The best were the cards that you got to keep hidden and use at anytime!

Question: What do You do in Animal Crossing Monopoly for Kids?

Answer: Kids can collect fruit, fossils, fish, bugs, etc. They can visit the different islands as well. It’s great for kids who are aged eight and up.

Question: Which Monopoly Game is Best for Kids?

Answer: Monopoly Animal Crossing is an excellent choice since it’s much kinder than the original game.

Question: What Age is the Animal Crossing New Horizons Board Game for?

Answer: It’s for children and adults alike! As long as you’re eight years or older.

I hope you found this Animal Crossing Monopoly guide helpful in better understanding how to play. It’s a good idea to look at this guide and make notes along the way.

If you don’t have Animal Crossing Monopoly yet, you’ll want to grab it and enjoy it for your next family game night!