Catan is one of the best games out there, and if you don’t believe me, check out all of the expansions to prove it! Whether or not you’ve tried the base game, it comes with plenty of expansions to help you grow the number of players and the overall game.

Catan also has spin-offs, including card games. Have you heard about the Rivals for Catan? This guide will be all about that, along with a quick summary of the traditional Catan game. Read this Rivals for Catan Guide today and take your gameplay to new heights!

Catan (previously known as The Settlers of Catan) is a board game that allows multiple players to compete against each other. As a player, you’re a settler who can build cities, settlements, and roads. The board game itself represents the island.

Depending on expansions, the board itself and rules can look quite different. The base game of Catan only allows you to play with three to four players. If you grab an expansion, that number can increase. To win, you’ll need to have the most victory points.

What is Rivals for Catan?

Rivals for Catan is much different than traditional Catan since it’s a card game. But, first, you’ll also want to be a prince or princess in a duel.

You’ll still have the basics such as collecting victory points, resources, etc. You’ll want to watch the other players see what they’re up to as you play.

In The Rivals for Catan, you have the theme sets for time in Catan. The themes include The Era of Progress, The Era of Turmoil, and The Era of Gold.

Similar to Catan, you’ll collect resources, roll dice, and pay with resources to grow your civilization.

The Age of Darkness 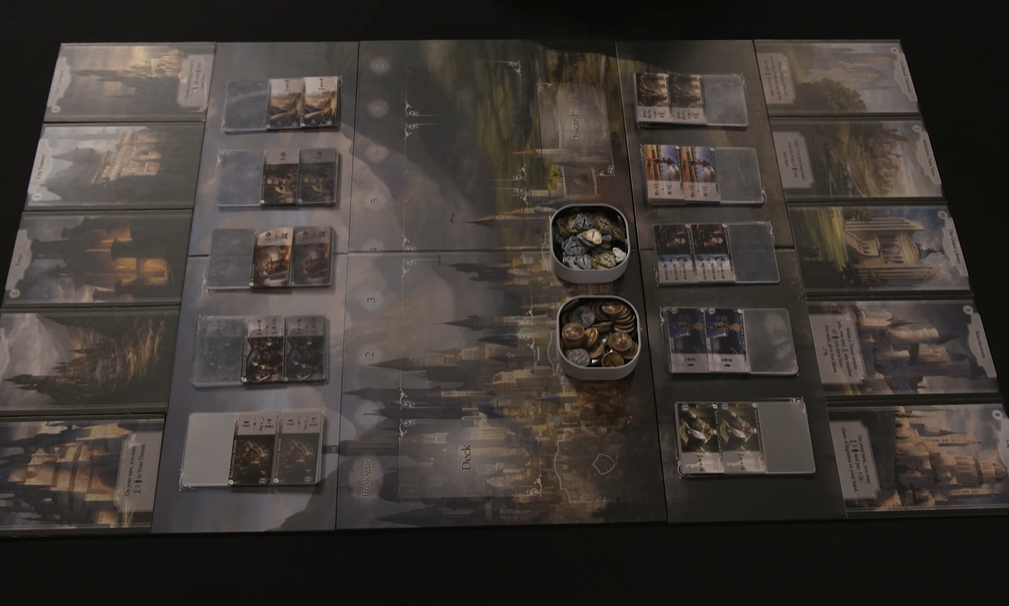 The Age of Darkness is an expansion for The Rivals for Catan. You’ll want to be at least ten years old to enjoy this game.

There are ninety cards in this expansion! Three new themes are added too: The Era of Barbarians, The Era of Merchant Princes, and The Era of Intrigue.

Duel mode allows you to combine different strategies and cards together. You’ll need the Rivals for Catan base set to play it.

You need to be at least ten years old as the base game. It’s also for two players.

The Era of Barbarians

In this era, you and the other player have to protect yourselves from attacks. You can have caravels, castles, strategists, border fortresses, and heroes.

The Era of Intrigue

A religious dispute is occurring in the world of Catan. You and the other player will lose their cards during this.

Having temples and churches will help reduce your loss. Church cards will earn you gold and bring heroes from the other side over. To end the conflict, you’ll build the Great Thing Stead.

The Era of Merchant Princes

During this era, you’re protecting the commerce in Catan. You’re paying attention to the Merchant’s residences and commercial harbor. To help trade ships, you’ll need the master merchants and maritime trade monopolies. 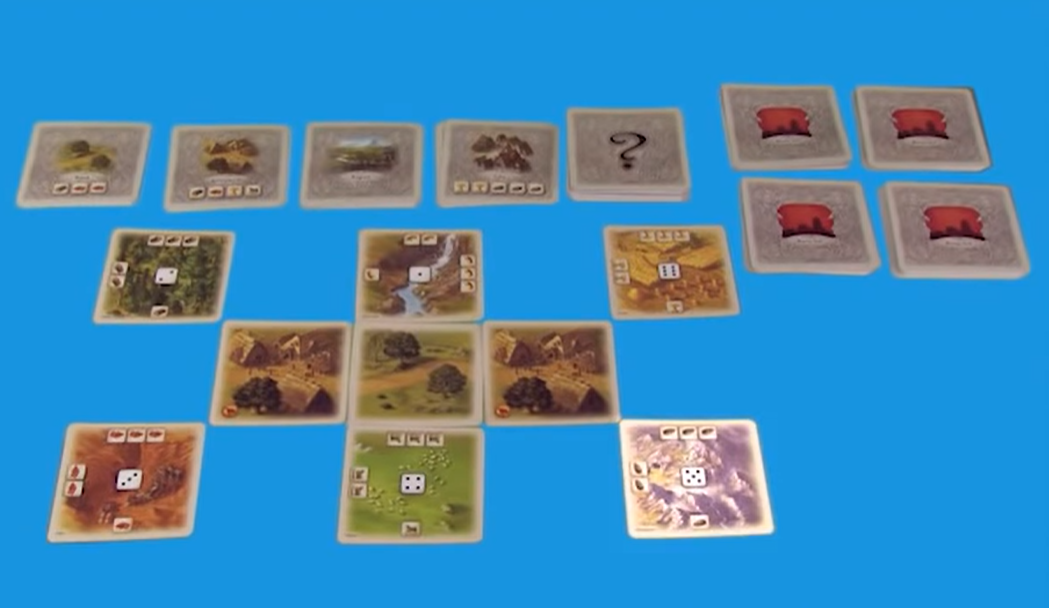 As you play Rivals for Catan, you’ll want to beat your rival with your land. Use cards to create your own kingdom. You’ll even get to explore new lands along the way.

Dice and cards allow you to gather new cards. You can obtain resource combinations and gold.

The Rivals for Catan is for two players and takes about 45-60 minutes as you build your territory around roads.

You’ll roll the two different dice at the beginning of your turn. The event dice can cause you to gain or lose resources (for you or the other player).

You might also need to play a card from the event cards. Finally, to end your turn, you’ll draw cards up to the limit.

The cards are both improvement and action cards. While action cards don’t cost anything to use, there might be specific requirements. You can spend resources in any region where they’re located.

In The Era of Progress, you’ll find technological and educational advancements in the land. This is also a way to have a more peaceful time.

In The Era of Turmoil, you have arsonists, archers, and traitors. It’s a more challenging game to become a princess or prince.

The Era of Gold is when it’s a battle to collect gold. Therefore, the gold resources are more critical during this time.

Use merchant ships and buildings to increase trade. Trade equals victory points. Victory points are how you win! Keep the heroes on your side to avoid them helping the enemy.

Where To Buy It? 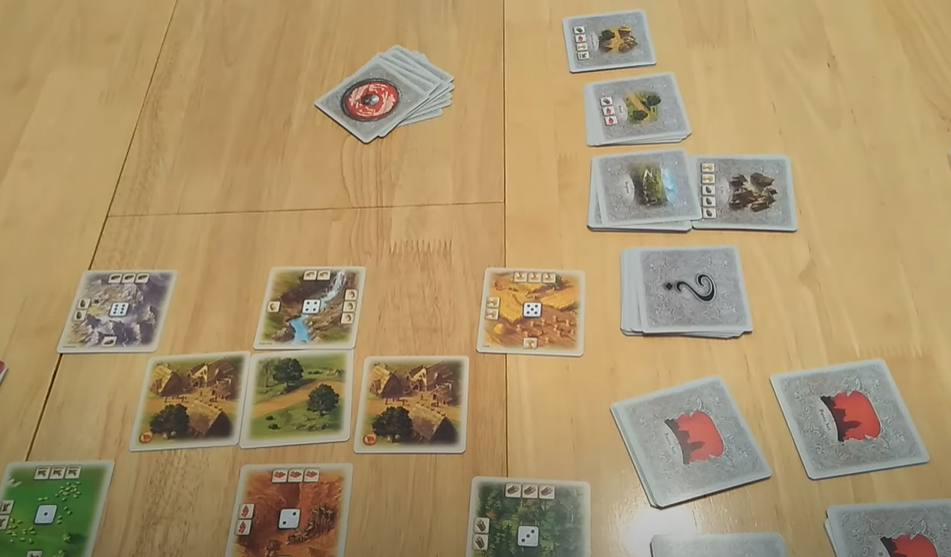 You have the option to buy Rivals for Catan either offline or online. To find the different expansions available, it might be best to check online.

In-person stores might charge more to gain a profit. Online retailers might have more games to choose from, but you have to be careful of counterfeit options.

You can check Target, Walmart, and Amazon, to name a few. I love how with Amazon Prime, I can get free shipping on all Prime items. So if you’re near an Amazon fulfillment center, then you can get your game in as little as a day or two.

Target has an app that makes ordering items convenient. You can also collect points on your purchases.

Use those points toward discounts on future board games! Don’t forget to check out different deals on Target, and don’t hesitate. They had a board game for 50% off, and I waited; that deal was gone.

Walmart has a ton of choices too. It’s best to order online, though, since in-person stores can be limited.

For example, some items might be unavailable in the store but available to ship. Be sure to grab a few games to lower the price of shipping.

Since it’s a card game, you don’t have the immersive board like the original Catan game. In addition, many are unhappy that it’s pretty dependent on dice.

It’s only for two players. Nonetheless, it’s still a fun game for practicing your strategy and defeating the other player.

Alternative Games to Rivals for Catan

I’ve compiled this list to give you an idea of other games similar to Rivals for Catan. So whether you’re looking for a brand new game or love Catan so much that you want something similar, this list has you in mind. 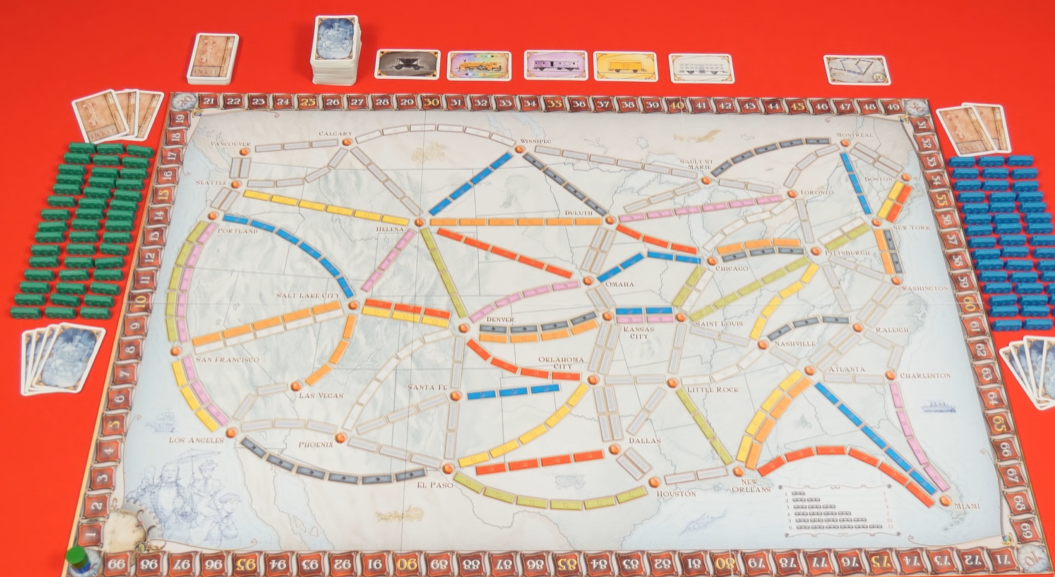 All aboard Ticket to Ride! Head back to the railroad tycoon era in North America (with the traditional game).

If you enjoy it, the good news is that there are other Ticket to Ride variations, including Europe, Asia, etc.

Instead of building up your territory, you’re building your railroad system. Each track is worth different points.

It’s a game of strategy since some tracks will cross into multiple cities. This allows you to build other tracks off of them.

It’s not a co-op since only one person will be victorious. The person with the most points, in the end, will win. You can even block other players from finishing their trains with your own tracks. 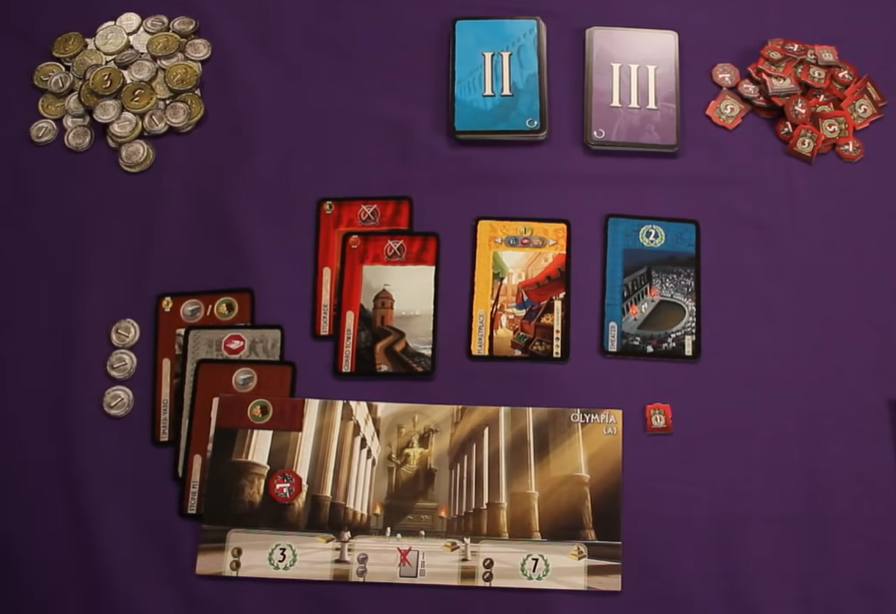 Another popular option that has Catan vibes is 7 Wonders. You’re a leader in the Ancient World. You’ll need to show off your military prowess, develop commercial routes, and gather resources.

7 Wonders starts you with seven cards that you’ll get to choose one from.

You then pass the other cards to the player next to you. Everyone reveals what card they pick at the same time.

You’ll need to watch what the other players are doing to win. Since it’s a card game, it’s not only about the cards you need but also the cards you can use to stop others.

Once the third age ends, players will tally their scores, including military conflicts. Whoever has the most points wins. 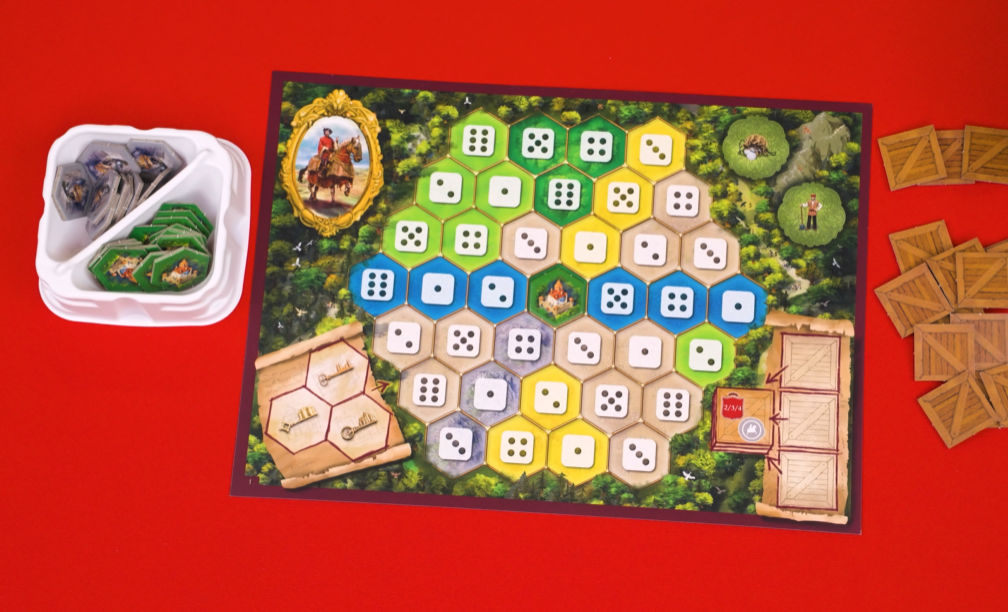 No list is complete without The Castles of Burgundy. This game is a blast since it transports you back to Medieval France.

Like the traditional game of Catan, you’ll have a hexagonal board. Keep track of workers, settlements, and more in this exciting game.

Five phases occur in the game. But, first, get ready to sit for a while since it takes about an hour.

You’ll want to be at least twelve years old to enjoy this game. There are various versions, including the 20th anniversary and the 9th expansion! 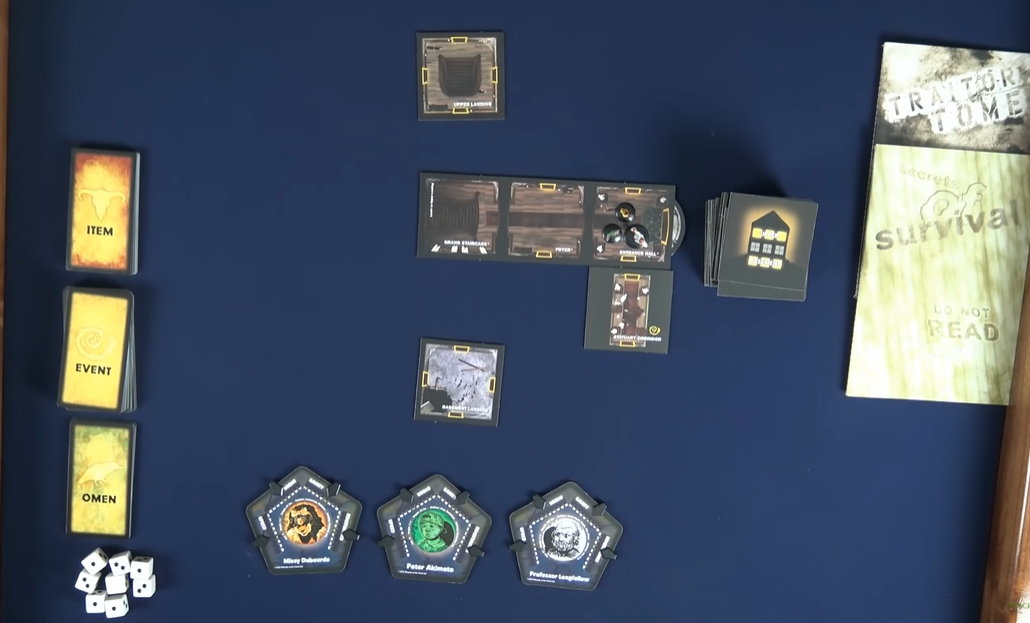 What a fun game since it’s constantly changing! Each time that you play it, the theme can vary.

Some themes are more complex than others. For example, I remember the betrayer placed plants throughout the mansion wherever they pleased. Let’s just say it was nearly impossible to beat.

Don’t fret, though; that’s just one of the numerous ways to play. The interesting part is that you don’t find out who the betrayer is until the middle of the game.

Pick who you are, and that’ll tell you your different strengths and weaknesses. You all need to work together to win (co-op).

Plenty of strategy is involved in this game as you explore the mansion, which gives it Catan vibes. 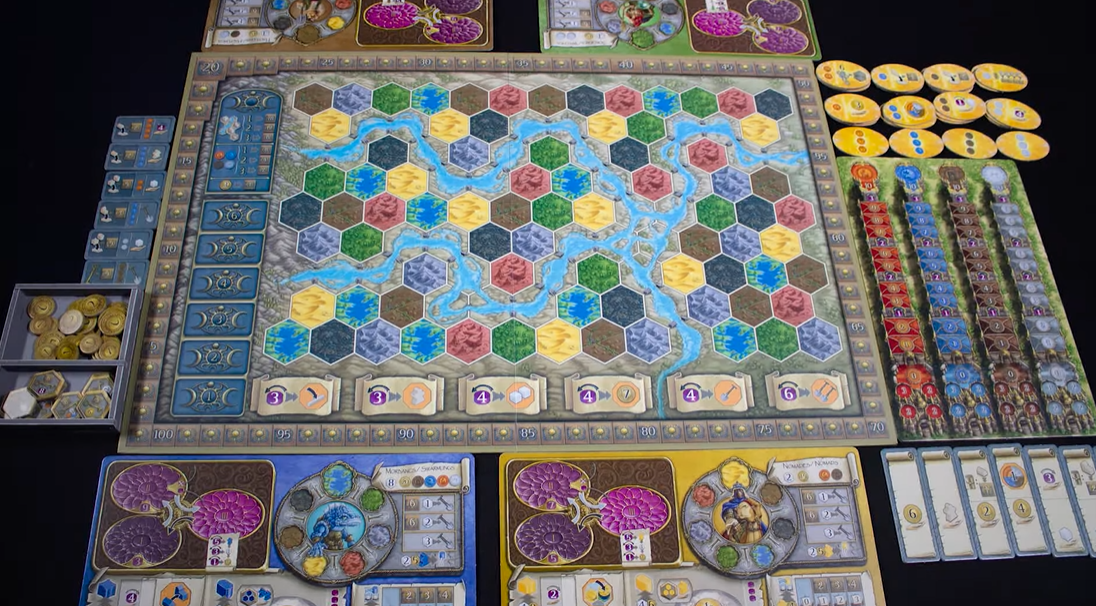 Enjoy this game that can take more than 150 minutes! I only recommend this game for an experienced board gamer, but it’s great for those who are at least twelve years old.

Bring magic to your game night as you play this fantasy game. It’s a more challenging game than Catan, which is important to consider.

You’ll be in charge of one of fourteen factions in this game. Two to five players can enjoy this game.

Develop your group’s skills to build your land. You must transform landscapes to make them like the factions’ home environments. Great for those looking for a game that’s less about luck and more about planning. 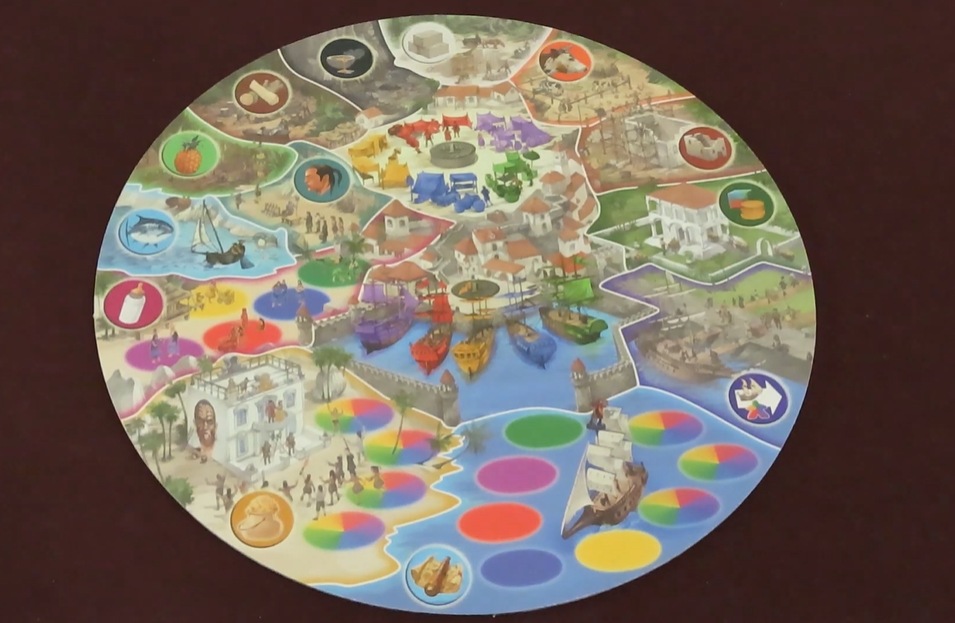 It even has one tray to hold all the progress cards from the expansion and base game.

In the New World, there are new opportunities and challenges to face. For example, you can use the colonial lottery and rescue Robinson Crusoe.

War and Peace is a fun expansion to the traditional game of Archipelago. Gameplay is a bit quicker as well.

Question: Is Rivals for Catan an expansion?

Question: What’s the difference between Rivals of Catan and deluxe?

Question: Which Catan expansion pack is the best?

Answer: The Seafarers is one of the best! Traders and Barbarians and Cities and Knights are also great.

A Rivals for Catan Guide

After exploring this Rivals for Catan guide, I hope you have a better understanding of the gameplay. While it has many differences compared to the original Catan game, it still has similarities.

You can also check out the Deluxe version and Age of Darkness for even more opportunities! Finally, when you’re ready to find even more games, check out the board game alternatives to Catan.