Catan is one of the most popular games right now! With a bit of luck and strategy, you can have a successful game.

Due to its popularity, there have been multiple expansions and spin-offs. Have you played Catan Traders and Barbarians before?

Being a part of a board games group, Catan is one of the more popular options. However, people look toward expansions to keep it fresh and even extend gameplay or the number of players.

I’ve compiled this Catan Traders and Barbarians Guide to go over this excellent expansion. So be sure to read on to learn all about this expansion today.

Before we head into Catan Traders and Barbarians, it’s important to understand a bit about the base game of Catan. If you’re interested in any of these expansions, then you’ll need the base game to play them.

Catan is a multiplayer board game where you and your friends are settlers on the island of Catan. During play, you have various resources that you’ll use to build different items.

You’ll build roads, cities, and settlements on a hexagonal game board.

To win, you’ll need to have the most victory points. Victory points are awarded based on how much your settlement grows. Three to four players can enjoy Catan.

What are the Catan Expansions?

Some of the Catan expansions will allow you to extend the number of players. Some will add excitement, such as pirates (Catan Seafarers).

The spin-off is a two-player card game called Rival for Catan. It’s similar to Catan since there are resources, but you don’t have a board. It has expansions, too, including Rivals for Catan Age of Enlightenment and The Age of Darkness.

What is Catan Traders and Barbarians? 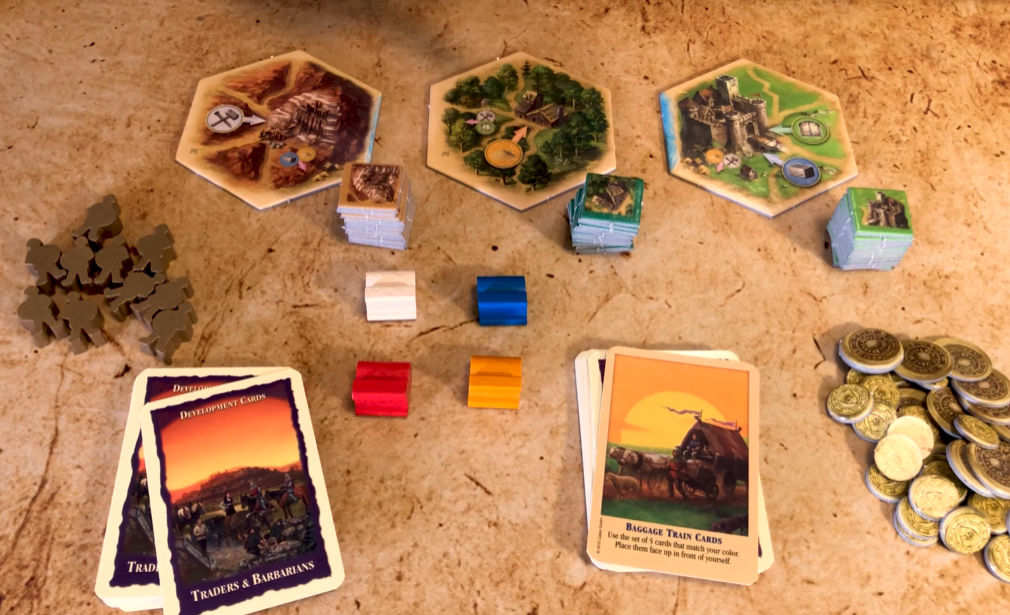 Catan Traders and Barbarians is the third expansion of the Catan game. Again, Two-four players can enjoy it along with the base game.

In this game, you have a caravan with various items that go between three trade hexes. You’ll be given a wagon as well.

Wagons only have so many movement points during your turn. They can move due to movement costs and in intersections of hexes.

It includes five scenarios for play.

When you have an empty wagon at a trade hex’s central point, you’ll draw a commodity tile from the trade hex. Then, it’ll go to another trade hex.

You can upgrade the wagons to different levels. The higher the level of your wagon, the more gold you can earn. You’ll also be given a chance to drive off barbarians and receive more movement points when it’s your turn. 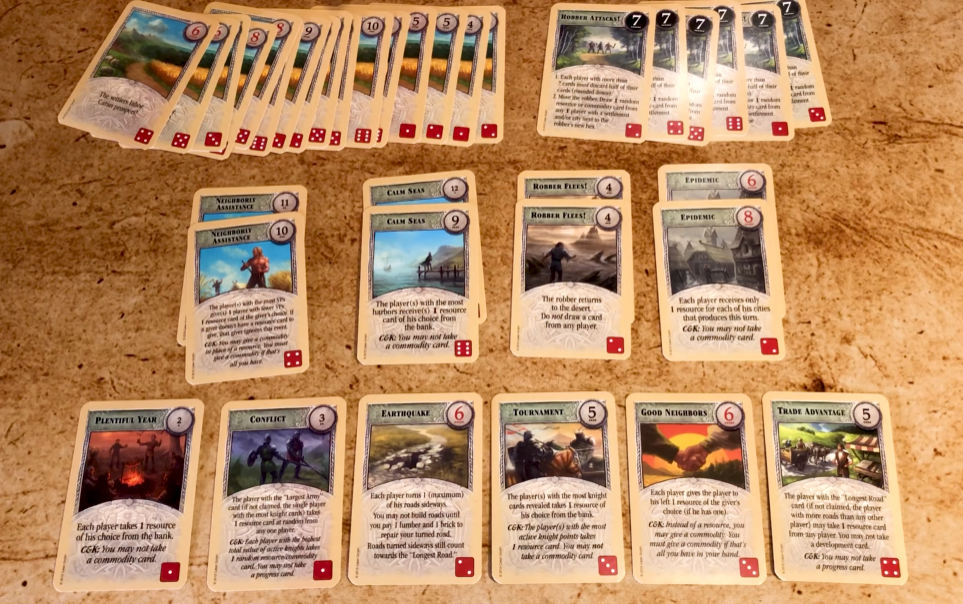 Once the board is set up (depending on the scenario or variant of your choosing), you place three barbarians on the board. Roads can’t be built on a path where a barbarian is.

You can drive barbarians off by wagons. However, when using the Barbarian Attack scenario, place the barbarians onto one side of the road.

They’ll be on a hex and a road. Knights can remove them. Barbarian Attack development cards could remove them. If you combine Traders and Barbarians with Cities and Knights, then you can have knights move a barbarian from the path. The knight then can’t be used.

It doesn’t take too long to learn! Catan Traders and Barbarians is great for your next family game night or game night with friends.

It’s great for those at least twelve years and older, and they won’t get bored since gameplay can change every time. Mix up the scenarios to keep it fresh. 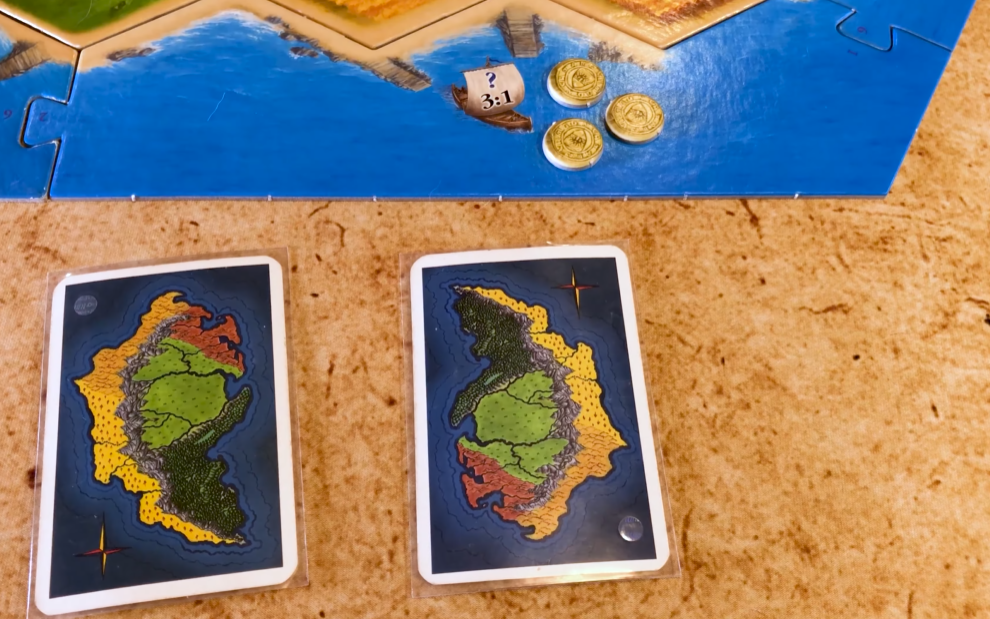 One of the scenarios is actually called Traders and Barbarians. This is when the barbarians have been driven off, and you need to repair the area.

Various paths and roads have glass, marble, and baggage trains delivered to the castle. Tools go to the marble quarry, and sand goes to the glassworks. When you successfully complete a delivery, you’ll receive victory points. Expect barbarian invasions!

The Fishermen of Catan allows you to fish in the game. There are other elements added to the game as well.

The Rivers of Catan allows you to make good money when you place settlements and roads near rivers. There might be nothing left if you show up too late to build.

The Caravans-Nomads of the Oasis is where you look for grain and wool. Caravans will provide you with plenty of trade opportunities.

Barbarian Attack is where you can expect barbarians to come onto the land and occupy it. Knights will battle these invaders to stop them.

Where Can I Buy Catan Traders and Barbarians?

You might be able to buy it in person, but online is better. I’ve seen the base game of Catan in retail stores, but not many of the expansions.

I like heading online to Walmart, Target, and Amazon, and comparing prices. Amazon allows me to earn points on my purchases, Walmart has good deals, and Amazon is convenient.

All of these locations, at times, can have super awesome deals too.

Consider signing up for Amazon Prime, so then you’ll get free shipping on Prime items. I like how they have the buy now option. Let’s face it, we’re busy and don’t have time to be filling out our details every time. Amazon can save your information to make it faster.

Amazon also has a variety of games available. When you check online, ensure that you’re ordering the correct game and not a knock-off. 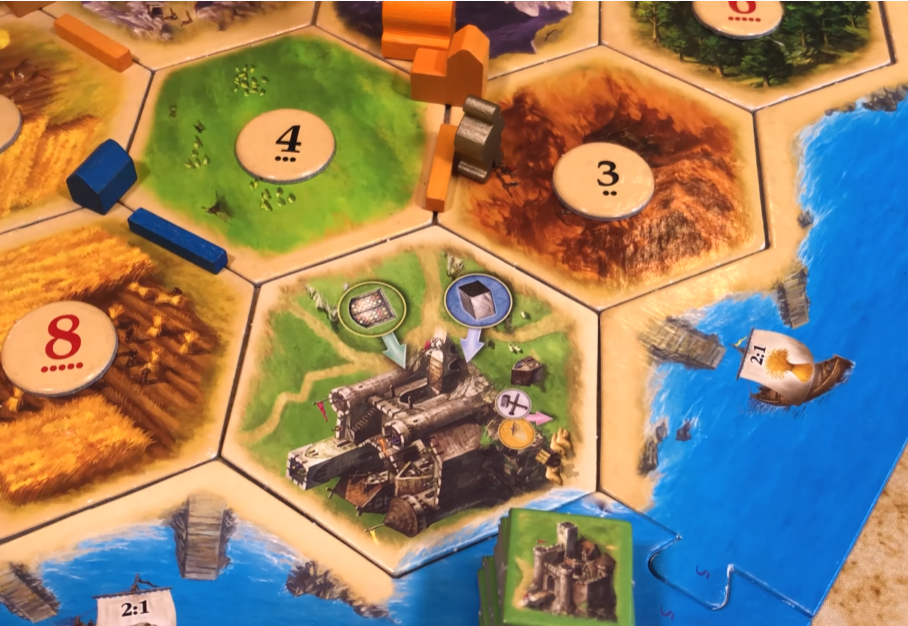 The Harbormaster Card will give the player with the most harbor points two victory points. In addition, you can use the commercial chips for two players to make the other player trade with you.

The Friendly Robber is where robbers are hiding along the forest. Affluent travelers are being robbed by Rob de Hood, and poor players don’t have their items stolen. Once you have two victory points, the robber can steal from you.

When a knight card or a seven is rolled, the robber can’t be moved to a terrain hex that’s next to a settlement of a player who has two victory points. So if there isn’t a location for the robber to move to, then they go to the desert hex.

Half of your resource cards will be taken when a seven is rolled if you use this rule. You can also combine this rule with other scenarios and variants.

Catan Event Cards adds one event deck to the game. Event Effects rolls replace the dice. On your turn, you’ll turn the top of the event card face up.

Check to see the number on the right of the card; that’s how much you rolled. This decides which terrain hexes produce resources.

Instead, it can cause events to occur as well. As a result, half of the cards have events!

To play this, you’ll shuffle the 36 cards. Place five of the cards face down for the event card deck.

Once the New Year card is revealed, you’ll repeat the above process. This will give you an all-new event card deck.

Place six fishing spots on the board. Then, on an interior hex, place a lake tile.

Fish can be traded for actions. Excess fish during payment are lost, though.

To win, you’ll need one extra victory point. If you’re playing with only two players, you don’t use the trade token mechanic.

For this scenario, you’ll need 22 camels and one oasis hex. This is where the settlers of Catan grow tired of how busy the village has become.

They remove the robber and start their own territory. Unfortunately, once they move here, wool is necessary for clothing, and it’s difficult to find. Their diets also become boring.

Send camels out to Catan for trading. You’ll have three caravans during the game.

Cities and settlements that are next to the caravan route are worth a victory point. For roads that run along a caravan count, it’s double.

To prepare it, you’ll place the oasis hex in the center before you create Catan. The camels and robber will go next to the board.

The robber will go on any hex of your choosing with a number token when a seven is rolled. It can’t be the oasis.

When you upgrade or build settlements, you’ll receive one camel at the end of your turn. A voting round determines where the camel goes.

During the voting round, you can bid one time. Bidding begins with the player who finished their turn.

It moves clockwise. Grain or wool resource cards are placed face-up to bid. Each card that you bid gives you a vote.

All cards played in the voting phase will get rid of these cards. 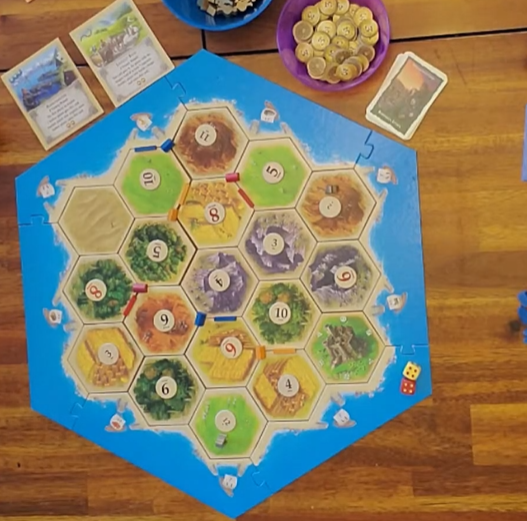 Over time, the number of barbarians starts out small and then increases. They threaten cities, settlements, and resource production.

The castle and desert hex will be placed at the top. The following hexes will be randomly placed: One mountain, two fields, three pastures, two hills, two forests. They’ll be your coastal hexes.

When a player builds near a coastal or desert hex, you’ll receive trade tokens. You can also get rid of a knight card.

When using trade token actions, they cost two trade tokens for the player in the lead. One token is given to the other player.

There are various Catan game alternatives out there to choose from, including ones that you wouldn’t think about. My top pick is Splendor.

Splendor is a game of strategy and very little luck where the first person to collect fifteen points wins!

These games are similar to Catan, but they deliver if you’re looking for something fresh. 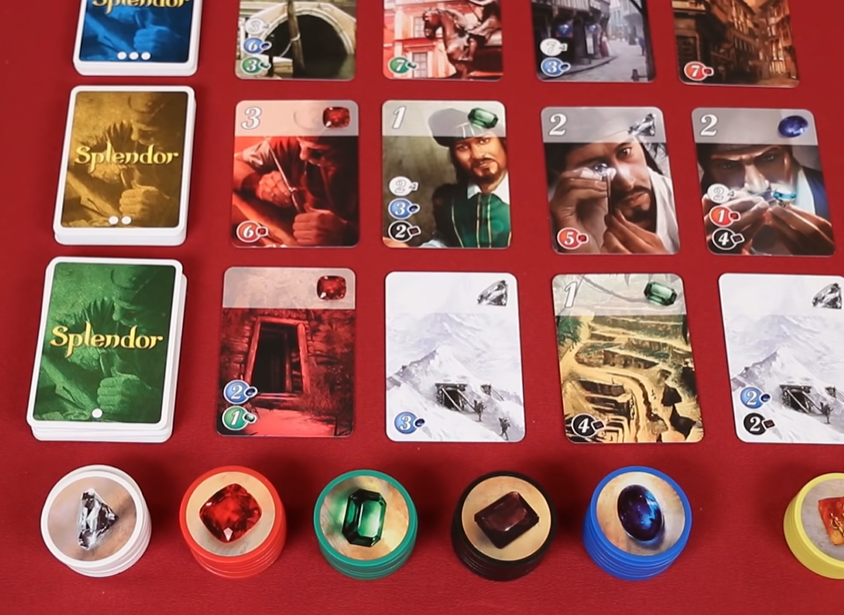 A card game where you have various cards with gems and points. The first person to fifteen points wins.

You and the other players must work together to stop diseases from destroying the world. Each character has a different ability to help prevent the spread.

Ages: Eight and up, but I feel a bit older will be better. 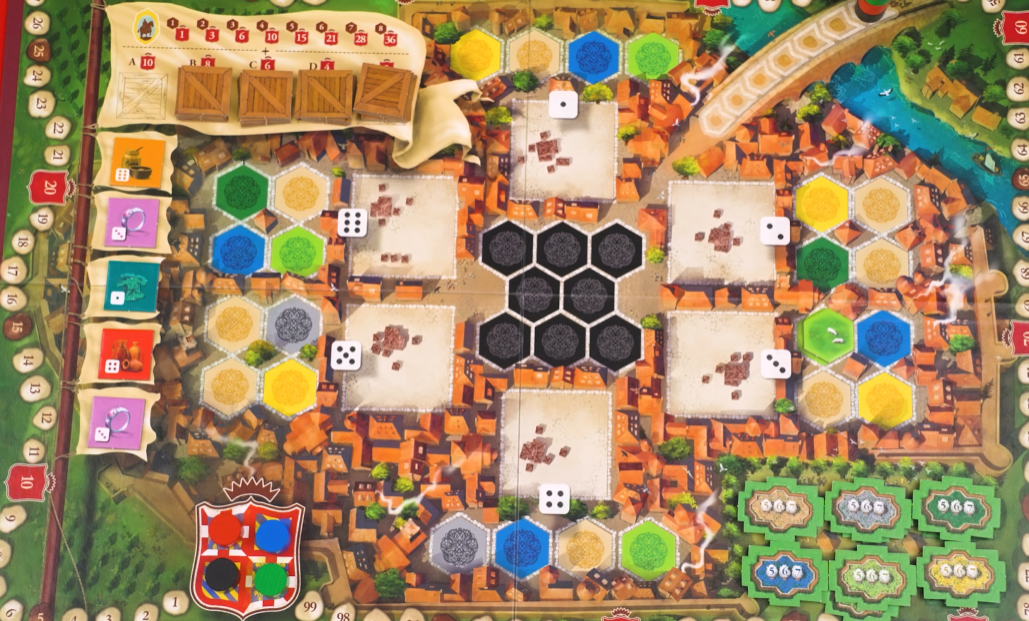 Take a trip back to Medieval France and make your land succeed. It’s a game of strategy through agriculture, city development, and more.

Ages: Twelve and up (harder than Catan).

Gameplay: It can take about thirty to ninety minutes. Two to four players.

Question: What is Catan Traders and Barbarians?

Answer: It’s the third expansion of Catan. There are different variants and scenarios within the game! You can even buy it with the Cities and Knights expansion!

Question: What happened to the barbarians of Catan?

Answer: Peace returns once the barbarians are driven off. You’ll need to build the land after they’ve left in certain scenarios.

Question: What is the third expansion to Catan?

This Catan Trade and Barbarians Guide was an overview of this expansion. Be sure that you check out the other expansions as well!

Before you can begin the expansions, you’ll need the base game. Whether you’re looking for a game for your next family game night or an evening with some friends, it’ll be loads of fun.