If you’re a massive fan of Settlers of Catan like me, your first instinct after playing a few times was probably to start researching expansion packs. But when you Google “Settlers of Catan Expansion Packs,” you’ll quickly learn that it is quite the task!

In the Settlers of Catan universe, there are all sorts of add-ons. You’ll find things titled “Expansion Packs,” “Extensions,” and even “Scenarios.” You’ll see accessories, new boards, and even completely different stand-alone games! It can get confusing quite quickly when there are so many options and buzzwords being thrown around.

But have no fear, by the end of this article you’ll be a pro in the Settlers of Catan world, and know exactly what expansion packs to aim for in your next session. Let’s begin!

I’m going to come right out of the gate and say that the best expansion pack for Settlers of Catan is Cities and Knights. It’s sure to scratch your itch for new strategies and adds a whole new dimension to the gameplay with more commodities, dice, progress cards, and tokens.

Closely following Cities and Knights, I’d add Seafarers if you want to expand your board size, and Explorers and Pirates if you want a bunch of mini-expansions you can pick and choose from.

What is the Board Game Settlers of Catan? 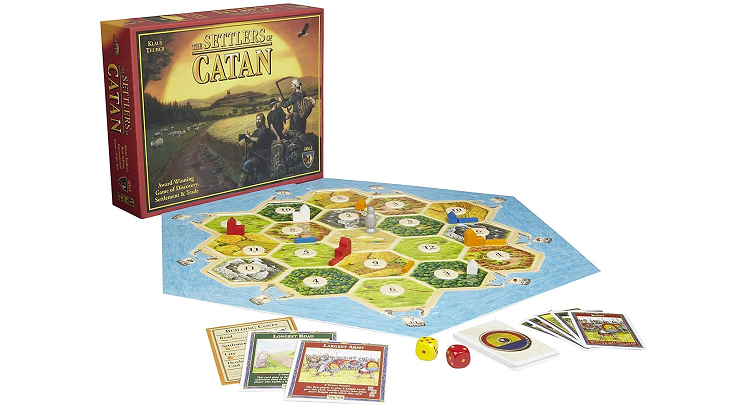 Settlers of Catan is an award-winning strategy board game first published in 1995. Since then, Settlers of Catan has become a legendary game in the board game community, with countless expansion packs and spin-off games. The game has become so popular, in fact, that it even hosts professional competitions around the world.

The gameplay revolves around resource management, and the objective is to build settlements, roads, and cities in order to conquer the land of Catan.

Since the board and its game pieces can be interchanged, the game allows for a different experience each time. Settlers of Catan sessions usually last 60-90 minutes and are generally played with 3-4 players. However, there are several expansion packs and versions that allow for more or fewer players.

Since the term “expansion pack” is fairly broad in the Settlers of Catan universe, I’m going to use this section to break down the various types of expansions available. Each type impacts the game in its own, unique way.

The first type of expansion for Settlers of Catan is actually titled “expansion” packs on the official website. These packs add new gameplay elements to the game and are generally the meat and potatoes of its add-ons. Popular expansion packs include Seafarers, Cities and Knights, Explorers and Pirates, and Traders and Barbarians.

Extensions are simply expansions that exist to add more players to the game. On its own, Settlers of Catan generally supports 2-4 players, but with the extensions, they extend the gameplay to support 5-6 players.

Keep in mind that in order to incorporate extensions into the game, you need the base extension and the extension specific to the expansion pack you want to add more players into.

Scenario packs are mini-expansions that add small but notable elements to the game to change its pacing. Each one fits with various expansion packs, so make sure it’s compatible with what you won before you buy one!

A few notable scenario packs include the Treasures, Dragons, and Adventures scenario, the Legend of the Conquerors scenario, and The Legend of Sea Robbers scenario. But these are just a few examples… there are lots of different scenarios available for Settlers of Catan!

The first category includes games that are generally played in a similar fashion to the base game but have different themes. A few notable examples are Starfarers, A Game of Thrones, Settlers of America, and Rise of the Inkas. These games are a great way to change up the appearance of the game and add a few new mechanics to the game.

The second category includes games that are based on the original Settlers of Catan but are adapted for different players or audiences. Some examples include Rivals for Catan, which is a two-player variation of the original game, Catan Junior, which is a variation adapted for a younger audience, and Catan Logic Puzzle, which is a game designed to test your puzzle skills.

Perhaps the most simple expansion pack for Settlers of Catan is Seafarers. This is a great first pack to get because it doesn’t change the rules, but it adds much more to the map which creates a new game dynamic.

Seafarers Expansion Pack adds new water hexes to the map, which allows you to travel across the water via ships. In addition to the new hexes, Seafarers allows you to build “roads” on the water and introduces a new way to win. This expansion pack can be built on with a 5-6 player Extension Pack, which makes Seafarers accessible to more players. 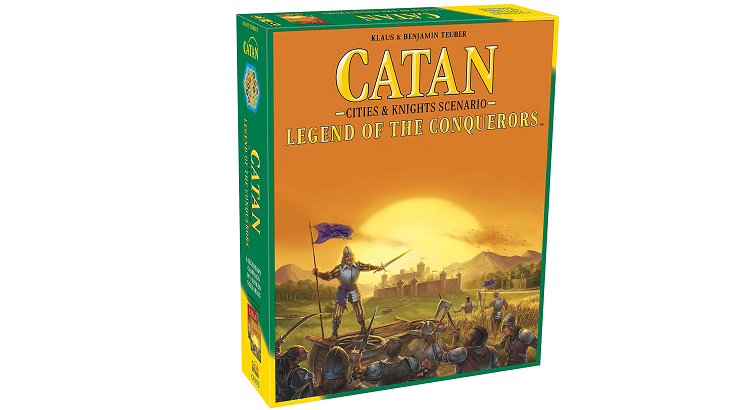 The expansion pack that adds the most strategy to Settlers of Catan is easily the Cities and Knights Expansion pack. This expansion pack introduces several new elements into the game, including new dices, new commodities, new tokens, and progress cards. Compared to the Seafarers Expansion pack, this one created almost an entirely new game.

No longer is the game simply about building as many settlements as you can, but it is now about obtaining victory points in one of many different ways. Players will be forced to rethink their strategies from the original game and innovate along the way.

This expansion pack can also be paired with a 5-6 player extension pack if you want to add more players to the game and plays great with the Seafarers pack added on.

The best way to describe the Explorers and Pirates Expansion Pack is that it’s a combination of Seafarers and Cities and Knights. It expands the board with increased sea spots, but it also changes the format of the game fairly drastically. Instead of revealing the entire board at the start of the game, players start on a small island and must “sail” to other islands to discover them.

If you’re looking to add an element of mystery and luck into your game, the Explorers and Pirates expansion pack is the way to go. It can also be formatted to groups with 5-6 players if the Extension pack is purchased. 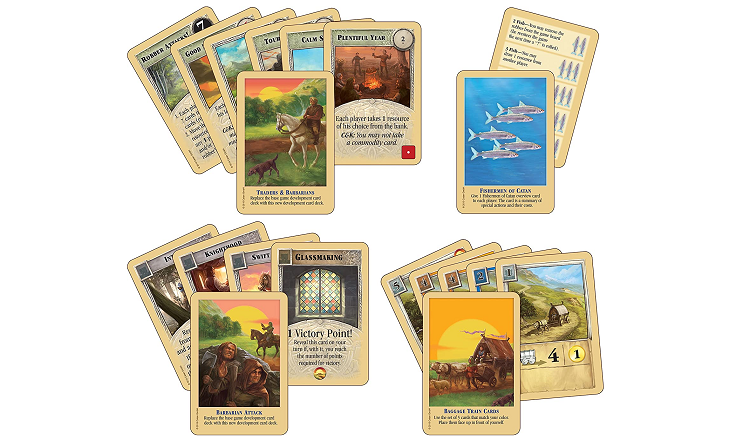 The Traders and Barbarians Expansion Pack is a collection of mini-expansion packs, that can be added individually or all at once. I really enjoy the freedom that this pack adds, as it doesn’t force a major gameplay commitment from all the players.

Overall, the pack includes five different scenarios and four rule variants you can throw into the mix. Each one specifies which packs they can be used with as well, to ensure gameplay doesn’t get confusing.

I’d recommend picking up this expansion pack if you’re looking for a few small new additions to the game, perhaps after you’ve already grabbed Seafarers, Cities and Knights, and Explorers and Pirates. 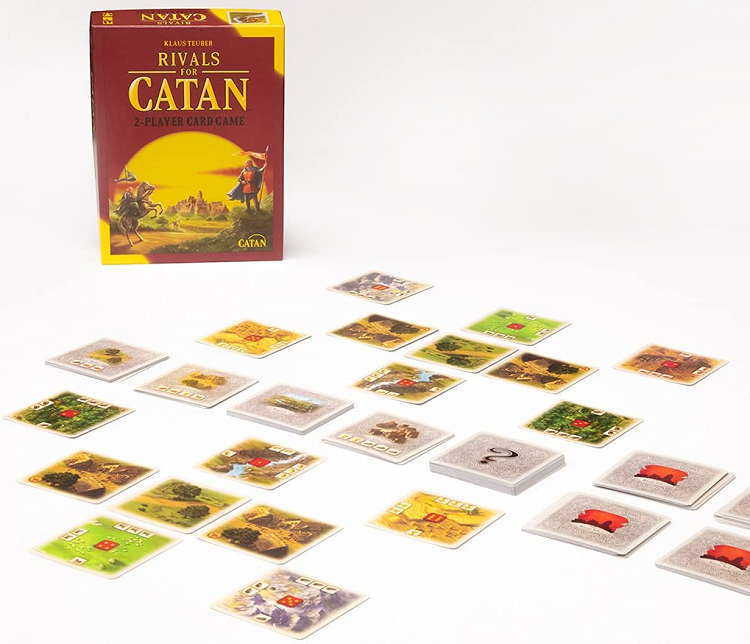 Rivals for Catan is a great way to play if you only have two players. If you’re like me, you’ve probably tried to play the original game with two people only to realize it’s not that great. Rivals for Catan is specifically designed for two players to go at it, and it is made up entirely of cards. That means there’s no massive board game to set up, and it’s great for travel! 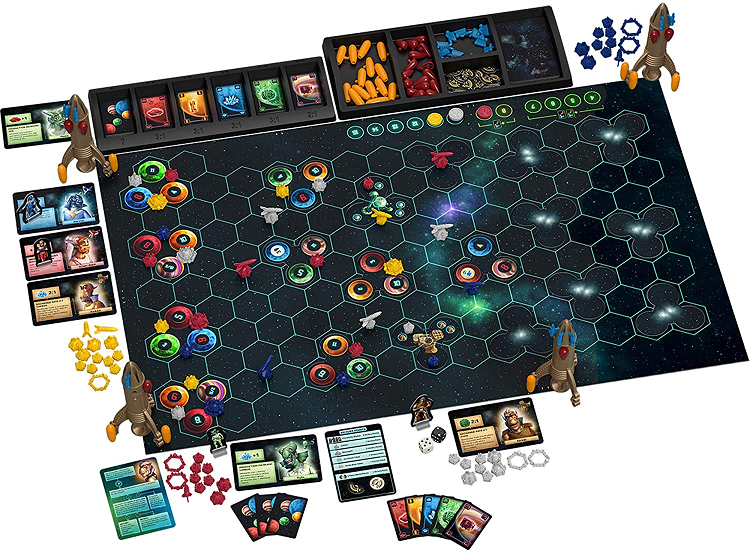 If you’re simply looking to change the appearance of your game, Starfarers is my favorite way to go. It changes the artwork from old-fashioned to science fiction, as you are now racing against other players to upgrade your spaceship.

One of the key differences between this game and the original game is that it allows for players who are behind to catch up easier. Coupled with throwing the dice to gain resources, any player that doesn’t have many victory points is guaranteed to get a resource each turn. This makes the game a bit more competitive, as it is easier to come back and win if you’re falling behind.

Starfarers is its own game, and none of the other games or expansion packs are needed to play it. However, Starfarers does have a 5-6 player Extension if you wish to add in more players. 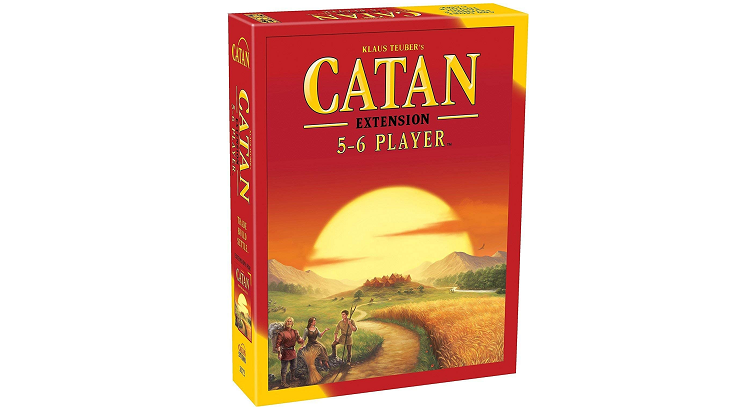 If you’re looking to increase the number of players in your Settlers of Catan game, look no further than the 5-6 player base extension. In my opinion, this is the only Extension pack you need.

They also offer Extension packs for several of the other Expansions, but in my experience, it seems to add too much time to the game if you have 6 players and multiple expansion packs. Keep in mind that you need the original Settlers of Catan game in order to use this pack.

Question: Which Settlers of Catan Expansion Should I Get First?

Answer: The first expansion you should get for Settlers of Catan is Seafarers. This expansion simply increases the size of the board to include more water spots, which allows for more exploration. This expansion pack can also be used with any of the other expansion packs, so it’s a great base to have.

Question: Can You Play Settlers of Catan with Two Players?

Answer: Although the original Settlers of Catan can be played with two people, it isn’t the best. If you’re looking for a version that supports two players, check out Rivals for Catan. The whole game has been adapted and specially designed to fit two players, and doesn’t even require a physical board. Rivals for Catan is a great game to play if you’re traveling!

Question: Are Settlers of Catan Expansions Worth it?

Answer: In my opinion, almost all of the Settlers of Catan Expansions are worth their (sometimes) hefty price. If you’re a true fan of the game, they can be added interchangeably to the base set to create some new and indulging situations.
Keep in mind that you can only add so many expansion packs to a single game session, or else it can too complex. The trick is to sprinkle one or two expansions in at a time and see which combos you like best.

Question: What are Settlers of Catan Scenarios?

Answer: Settlers of Catan Scenarios are small adjustments that can affect the game as a whole. They introduce new strategy ideas and are a great way to add new gameplay elements that aren’t too complicated. Scenarios are also the most budget-friendly expansions to get for the game.

Question: What is the Best Settlers of Catan Stand-alone Game?

Answer: Although there are a lot of Settlers of Catan stand-alone games, and surely more to come in the future, my favorite is Starfarers. Although extremely similar to the original game, Starfarers takes style to the next level and brings the game into space.
Another great thing about Starfarers is that it introduces spaceships that need to be upgraded into the equation, in exchange for roads. If you’re a true fan of Settlers of Catan, this is the best way to change up its appearance but still keep the game’s core components around.

If I were to pick one expansion pack to add to your Settlers of Catan game, it’d be the Cities and Knights pack.

The addition adds entirely new gameplay elements while still sticking to the original board. I always appreciate expansion packs that change the strategy of the game, instead of simply adding more locations. To me, this ensures gameplay longevity. Happy playing!