Lindsay Washington
Lindsay is a writer for Dice N Board. She brings her passion for board games and has a vast knowledge of various board games, card games, and more. She has been a part of local board game meetups, including testing out new games and helping others learn games that they’re not familiar with. Lindsay has also been writing articles online for years on various topics from digital marketing to nutrition! When Lindsay isn’t writing, you can find her engrossed in a novel, working on her books, or spending time outdoors.

Boardgame night is one of my favorite times of the week. It’s a chance to play classics and new options as well.

One of the most popular board games is Ticket to Ride. Whether or not you’ve played it, you might be curious about the best Ticket to Ride strategies.

Be sure that you’re at the top of your game the next time you play it. That’s why I’ve created this guide for you and others to check out some tips and strategies. So read on to learn how to take your gameplay to the next level.

What is Ticket to Ride?

This railway-themed board game takes you back to the railroad tycoon revolution in North America. During play, you collect and play train car cards to gain train routes in the territory.

This will allow you to build different railway routes. This will connect various cities across the board.

Many enjoy this multi-player game since it’s easy to learn. The overall game takes about thirty-sixty minutes of playtime.

It’s best for those who are at least eight years old. Two to five players can enjoy it.

What Ticket to Ride Comes With 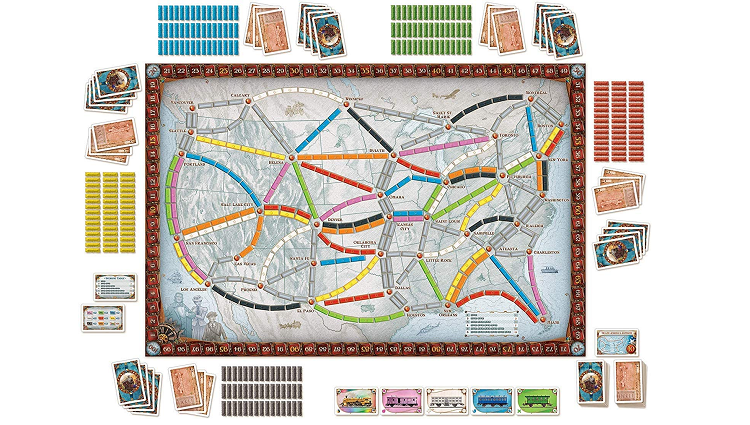 The object of the game is to score the most points. What I love most about the game is that you have multiple options to do this.

If you don’t complete the route on your destination tickets, you lose points.

Ticket to Ride comes with:

For even more fun, consider the Ticket to Ride expansions.

Ticket to Ride Expansions include:

All players will take their 45 colored train cars with matching score markers. The marker is then placed at the start.

How Do You Play Ticket to Ride? 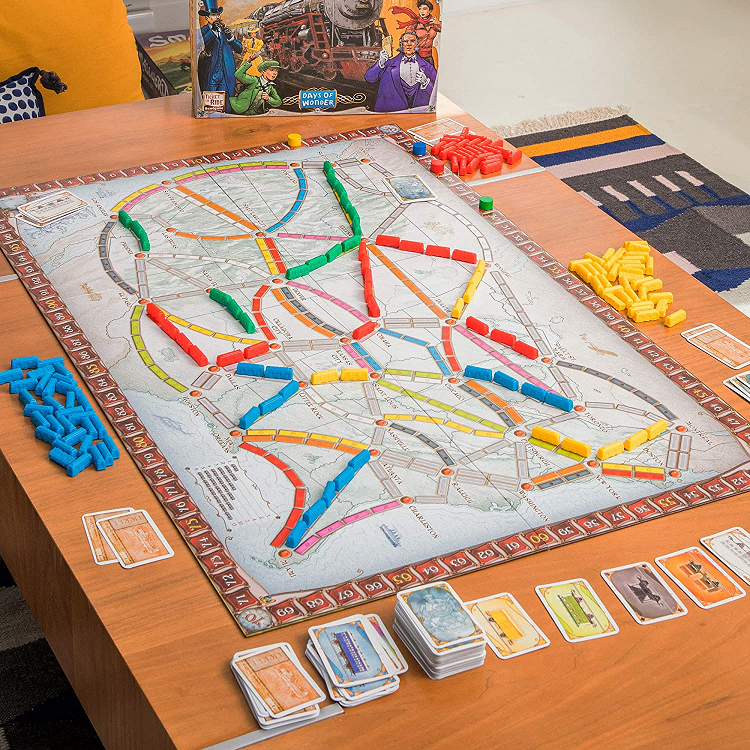 Before we continue, it’s a good idea to know how to play it. Pick who goes first and then go in clockwise.

You can either draw destination cards, take a route, or draw train car cards during your turn. If you take a face-up card, there needs to be a replacement.

It’s a good idea to continue to look at the board throughout the game. However, avoid giving any helpful information to the other players. Instead, find start and endpoints for each destination.

Take a look at the train cards and understand the value for each. Pay attention to the colors that your opponents are taking.

Look at what face-up cards they grab. Consider taking a card of a particular color at random to throw off the other players.

Check out the cards that are face-up. If there’s nothing useful, head to the deck for a card.

It’s essential to plan your steps in advance. Take time between drawing and building. 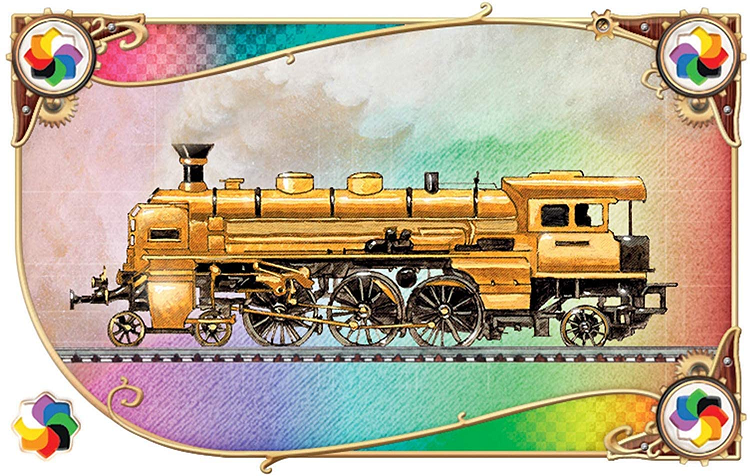 Ticket to Ride is about building, don’t wait too long. Occupy tracks that’ll benefit you.

Consider routes that’ll block the other players from moving forward. Don’t allow free sections for them to build around your routes.

Keep in mind that the game ends once a player has two or fewer train pieces. So as you place the trains, you don’t want to move too late or too soon.

When you play too early, this gives other players an idea of your strategy. In addition, this allows them to try and block you.

Some of the main routes will be gone when you wait too long. Take a few turns building up your cards.

Plan out what routes you’ll take in advance. Then, have a plan B in case someone else blocks or takes a route you had your eye on.

Consider connecting two cities to help you complete another ticket. This is a great way to increase your points in as few turns as possible.

As you play Ticket to Ride, you’ll start to remember the different destination tickets. Each route is a set amount of points.

The highest scoring points in the classic game include:

You’ll want to choose at least one destination ticket with a high value to have a shot at winning. In addition, many of the longer routes will go through several cities. This means that it’ll be easier to branch off.

Consider Cities With Only Two Connections 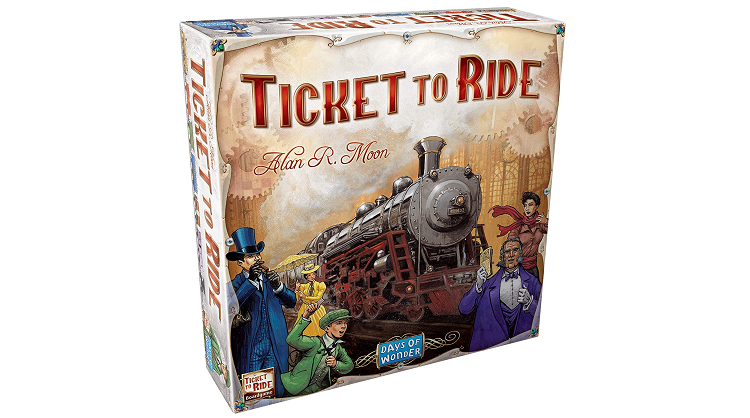 If you have cities with only two connections, you’ll want to start on those fast. This is because other routes can be taken by other players.

Experienced players will watch what you’re doing and figure out your next steps. So, naturally, you’ll want to stop them from doing this.

Consider playing trains for many turns in a row. This will throw off their game and not allow them to block you as often.

Figure Out Others’ Cards

Pay attention to any frustrations if you have your train on a route. Try to figure out where on the board they’re glancing. Notice the color trains that they’re picking up.

Some players will tell you to avoid hubs whenever possible. However, these are the main areas that can get crowded fast. So, if you need a hub, consider taking it first before anyone else.

Pay attention to how many trains each player has at all times. The game is over once someone has two or fewer trains left at the end of their turn.

This will help you be mindful of how close to the end of the game you are. It’ll also help you strategize along the way. For example, you can decide whether to complete routes, collect trains, or pick up more destination cards.

It’s okay to have a small number of long routes but avoid having too many. For example, it will be even harder to complete these routes if you have four-five players. So instead, opt for the shorter routes or routes worth a significant amount.

Where to Buy Ticket to Ride? 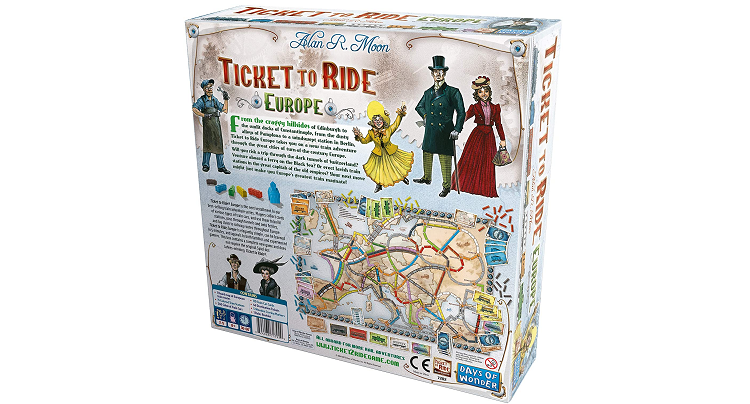 You can find Ticket to Ride at your local retailers and online. However, while you can check out a local retailer in your area, they might increase the price for a profit.

Major retailers could have deals and promotions in their stores and online. I highly recommend checking online.

Then you can decide on any expansions as well. I would hold off on buying an expansion when you’re first starting for now, though. But it’s a good idea to make a list of ones that interest you.

Online is convenient since you can order items right from the comfort of your own home. Plus, if your billing information is saved, you can purchase items much quicker.

I’m a big fan of Amazon Prime since there’s free shipping. Target has a pretty good app that’ll save your card information and billing address too.

Plus, you can earn points through Target! They sometimes have great deals. For example, I saw Betrayal at House On The Hill for 50% off once.

Don’t forget about Walmart, either. They have some good deals too.

Top Picks at a Glance

I’ve compiled this list of Ticket to Ride alternatives. So whether you love Ticket to Ride and are looking for similar games or just need something fresh, consider these options. 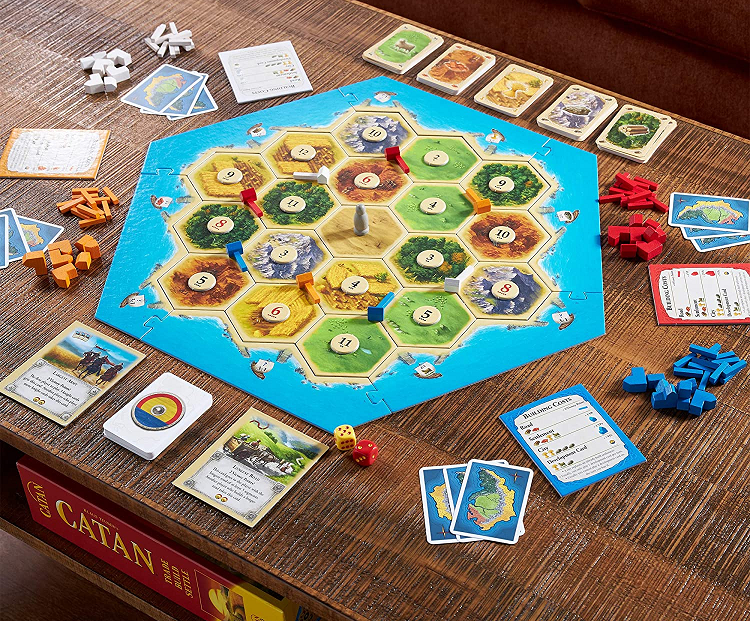 Catan used to be known as The Settlers of Catan, but it’s still just as fun! I recently wrote a Catan Strategy Guide if you wanted to check that out.

While there isn’t road and route planning like Ticket to Ride, there’s still plenty of building and planning overall. You’re a colonizer and have land called Catan.

To win, you want to have the most profitable colony. Unfortunately, various pitfalls can happen during gameplay. 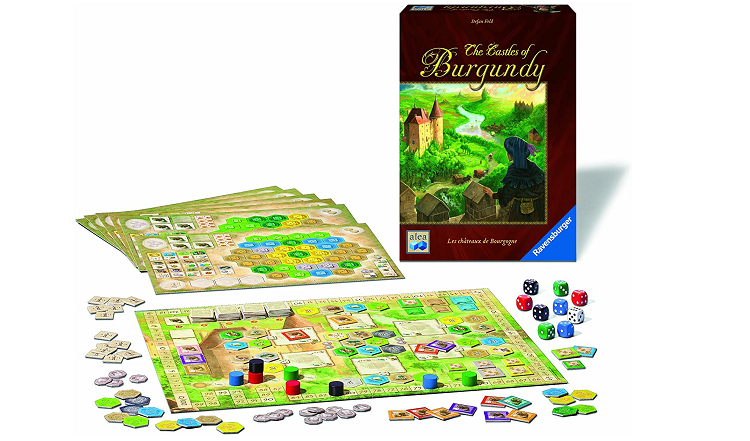 Instead of building a railroad, you’re an aristocrat in medieval France. You’re trying to get your own land during gameplay.

You could build cities, farms, castles, etc. It’s an easy game to learn and play. The Castles of Burgundy is best for those who are at least twelve and up. 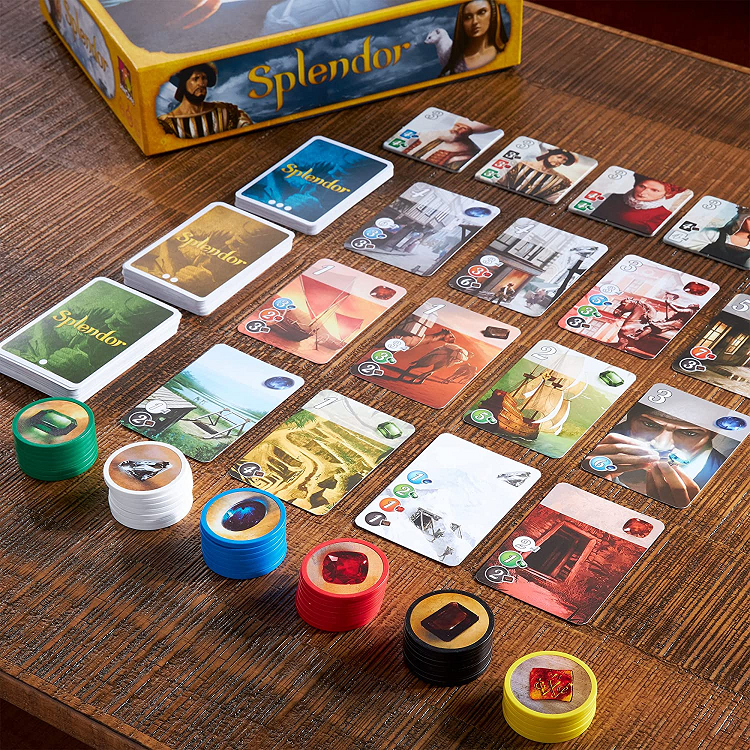 Splendor has easy actions, which make it similar to Ticket to Ride. The turn structure itself is very similar to this game as well.

You’re a gem trader and trying to get to fifteen points before the other players in the game. You can hoard one color (similar to Ticket to Ride) and stop others from obtaining the gems they need.

What I like most about this game is that gameplay can vary a lot by how many people are playing. Two-four players can enjoy Splendor. I wish that there was an option for five players. 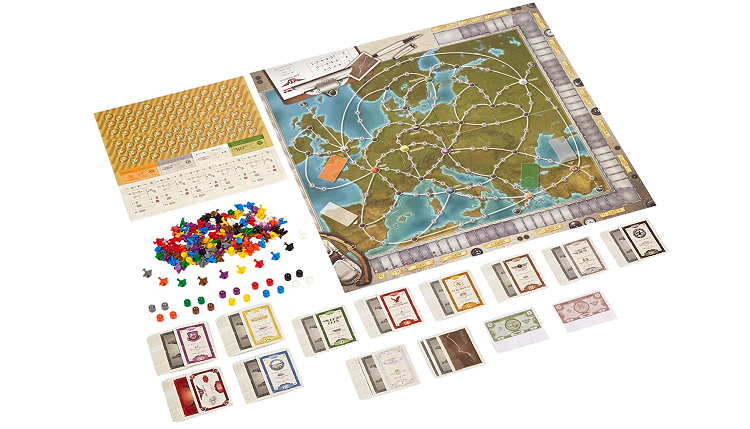 Airlines Europe is a stock game where you earn points based on the different stocks in each airline. When it’s your turn, you can either claim a stock, expands an airline, invest in a special airline, or receive a dividend. Of course, there’s still travel involved, which makes it similar to Ticket to Ride there as well.

One of my favorite games ever! Pandemic is a cooperative game; you’re all working together to stop a pandemic.

In the beginning, you randomly choose your player, which will decide gameplay. You’ll also need to set the difficulty.

It’s pretty tricky on hard mode, so I don’t recommend it. Instead, you’ll need to strategize and plan your next moves similarly to Ticket to Ride.

There are only so many pandemic cards, and once they’re gone, the game ends. The object of the game is to stop a disease from spreading before it’s too late. 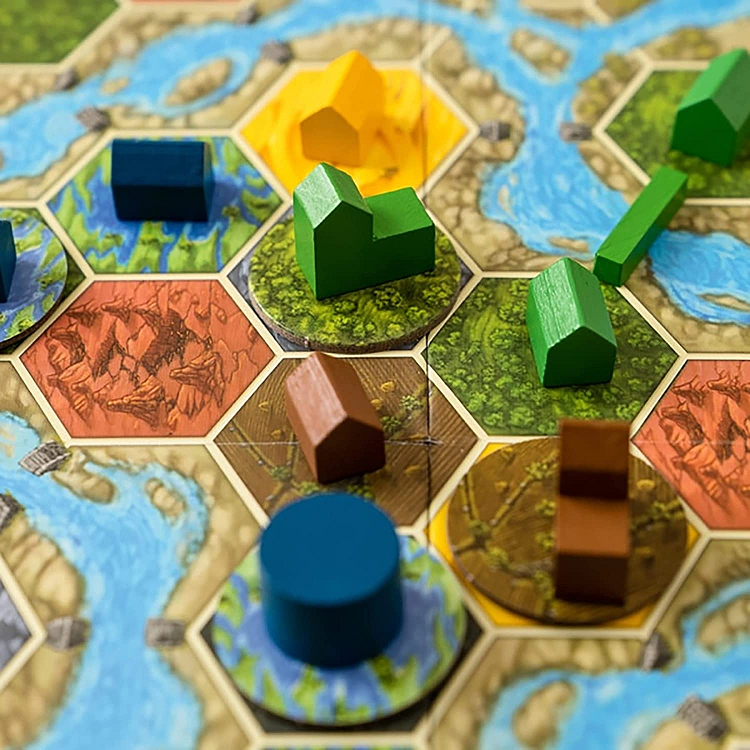 Keep this game for those who are experienced in board games and are looking for a challenge. Instead of having to worry about luck, this game is about strategy.

Head into a fantasy world where you’ll need to use magic and wit to win. Build structures and use magic to have as much land as possible. You’ll want to be at least twelve years old to try this game.

It’s excellent for two-five players, which makes me happy since I usually play with five people. Plan on playing it for a while since it’s about 60 to more than 150 minutes of gameplay.

Question: What is the Best Version of Ticket to Ride?

Answer: Nordic Countries is one of the greatest expansions. It’s a more competitive game than the others.

Question: How to Play Ticket to Ride with Actual Gameplay?

Answer: First, decide who will go first and then move clockwise. You’ll need to perform one action when it’s your turn.

Question: Which Ticket to Ride Should I Get?

Answer: If you’re a new player, consider the classic or European edition.

After exploring some of the best Ticket to Ride strategies, I hope they’ll be helpful in your gameplay. So be sure to write down these different tips to learn and use them while you play.

Keep in mind that each time you play could be different. Factor in how many players you’ll be up against too.

If you enjoy this article, be sure to check out our other articles today.