Monopoly Deal is the perfect travel version of Monopoly that’s composed entirely in a deck of cards. It’s easy to learn, difficult to master, and can be played in less than 30 minutes! If you’re in love with Monopoly in any way, you’ll love this new rendition of the game that’s quick to learn.

Today we’re going to break down all the rules of Monopoly Deal in its entirety! By the end of this article, you’ll know how to play like a professional. Let’s get started!

Who is Monopoly Deal for?

Monopoly Deal is created for anyone ages 8 and up, and can be played with 2-5 players. It was created by Hasbro Gaming, which is the same company that created the original Monopoly. If you love games that imitate capitalism on a small scale, you’ll enjoy the strategy required to win. Try not to be too nice!

The whole game is about the size of two decks of cards and comes in a single pack. It can be found at most Targets and Walmarts, and also online.

Overview of the Game 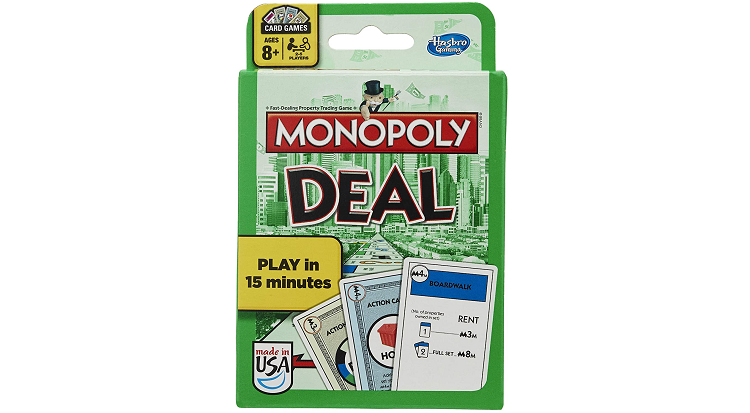 In order to win Monopoly Deal, the goal is to collect three complete property sets. The game revolves around trying to steal properties from your opponents and protect your properties with your personal bank.

Action cards are what takes the place of rolling the dice, and are used to charge rent, swap cards, and take money from other players. There are also a few surprises in there to keep the game interesting, but we’ll get into those cards in a bit.

First, let’s break down how to set up the game. The first step is to remove the four Quick Start Rules cards from the deck and hand them to players. These are mini reference guides to help you remember the rules in case you forget.

Next, shuffle the deck and deal five cards to each player, face down. Place the remainder of the cards face down in the center to make a draw pile, and decide who goes first. You may look at your cards, but don’t show your opponents!

When your turn comes around, there are three important steps that you need to follow.

The first thing you do when it’s your turn is to take two cards from the draw pile and add them to your hand. Easy enough.

The next step is to play up to three of your cards onto the table in front of you. You can put money/action cards into your personal “bank,” put properties down into your own “collection”, and/or play action cards into the center.

If you wish to put money into your personal “bank”, simply create a bank pile in front of you and put up to three cards in it. Money cards have their value listed on the front of them, and action cards can be converted into money if they’re added to your bank pile.

Their individual value is listed in the top corner, and once they’re added to a bank, they become money for the rest of the game and can’t be used as action cards anymore. Banks are used to pay other players when you’re charged charged for rent, birthdays, or any other action.

If you wish to add properties to your personal “collection,” simply lay the properties down in front of you. You can organize them by color. Each property card shows how many other properties are in that specific set.

Remember that only three complete property sets are needed to win the game! Keep in mind you can only reorganize your property set on your turn.

If you wish to play action cards on your turn, simply place the cards in a pile face up in the center next to the draw pile, or next to a corresponding property if it’s a house/hotel action card.

Action cards allow you to do things against other players, or towards yourself. There are 12 different action cards, and they are individually listed later in this article!

Once you’ve made your three (or less…) moves, it’s time to conclude your turn. If you have more than 7 cards in your hand at the end of your turn, discard any extras to the bottom of the draw pile. If you’re completely out of cards, take 5 cards at the start of your next turn instead of two.

How to Pay Other Players

Eventually, you’ll be forced to pay other players at some point in the game. There are a few rules to follow to make sure the transaction goes smoothly. First off, when you’re paying someone, the cards never go back into their hand.

Keep in mind that there is no such thing as change in Monopoly Deal. If a player charges you 3M and you only have a 5M card, you must give it to them and you won’t get change back. However, if you don’t have enough money to pay in your bank and/or properties, you don’t have to pay at all!

Overall there are 16 different types of cards in the game Monopoly Deal. 12 of those cards are action cards, and 3 are property cards, and 1 is a money card. I’m going to break down each cards in detail, so you can understand how and when they are used.

The Sly Deal action card allows you to steal a property card from any other player, as long as it is not in a full set of properties. You can then add it to your personal property collection.

The Forced Deal action card lets you switch one of your properties for another player’s property. Unlike Sly Deal, this card can be part of an opponent’s full set.

The Deal Breaker action card allows you to steal a full set of properties from another player, and add it to your personal collection. This is one of the best cards in the game.

Unlike the other action cards, the Just Say No card can be played outside of your turn. If a player lays down an action card against you, you can use this card to cancel the effect. Keep in mind that if that player also has a Just Say No card, they can cancel yours!

The Debt Collector action card allows you to demand 5M from any player.

The It’s My Birthday action card forces all other players to pay you 2M each. 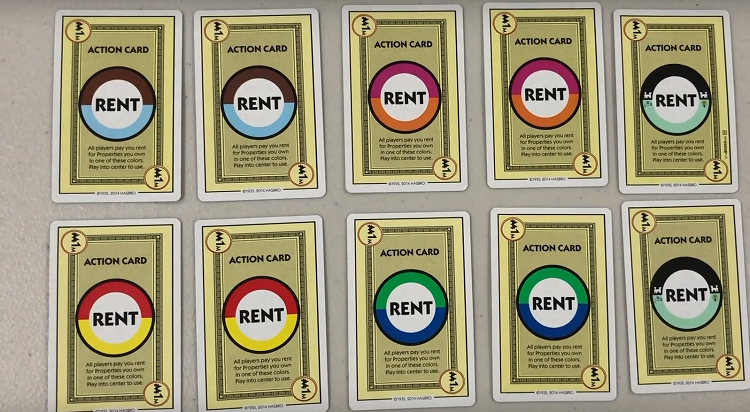 The Multicolored Rent action card allows you to charge any player of your choice rent for one of the properties (or sets) you own. It could be any color.

The Rent action card allows you to charge all players rent for a property you own that matches a color on the card!

The Double the Rent action card can be played with the normal Rent card to double its amount!

The Pass Go action card lets you draw two extra cards from the draw pile. These cards can be used during the turn you picked them up.

The House and Hotel action cards can be applied to any full property set that you own to increase its rent. Each property set can contain up to one house and one hotel, and a hotel can only be added once a house has already been placed. Railroad and Utility sets cannot support houses or hotels.

A property card is simply a single property. Each property card shows how many properties are needed for a full set, and how much to charge for rent.

The Property Wild Card can be used as a substitute for any property to help complete a set. The great thing about this card is that it can also be moved around if you decide to use it for another property. But be careful! This card can be stolen like any other property card. 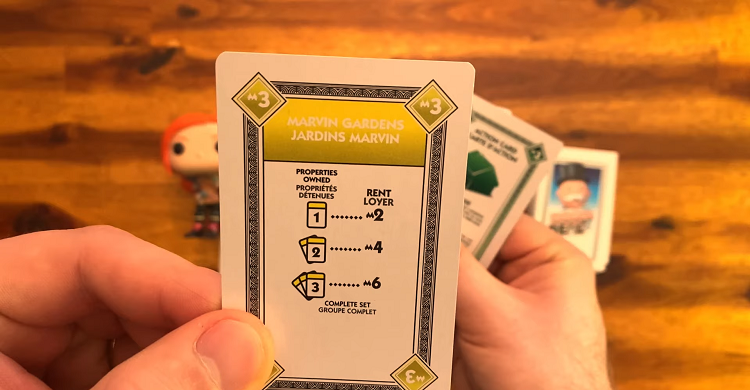 The Property Wild Option card is similar to the Property Wild Card, but it is specific to two different property colors. This card can also be reorganized on your turn if needed.

The game ends when a player collects three full property sets of various colors. Utility and railroad cards can each count as a property set. Keep in mind that you can only win on your turn.

Keep a sharp eye on the amount of properties other players own, and try to steal the property wild card if possible.

I always try to keep a Just Say No action card and a property stealing action card (either Sly Deal, Forced Deal, or Deal Breaker) in my hand at all times. That way if a player looks like they might pull out a win, you can block them before it happens.

Question: What Happens if I Run Out of Cards in Monopoly Deal?

Question: Can I Pay a Player with Cards in My Hand?

Answer: No. Players can only be paid with cards in your bank, or cards in your property collection. You get to choose how the player is paid, no them. If you don’t have enough money in your bank or collection, you simply pay them what you have and forget the rest. Debts are not built up, and change is not given.

Question: Can I Have More than 7 Cards in My Hand at the Eend of a Turn?

Answer: No. If you have more than 7 cards in your hand at the end of your turn, simply discard the extras (of your choice) into the bottom of the draw pile.

Question: How Long Does Monopoly Deal Take to Play?

Answer: Monopoly Deal can take anywhere from 15-30 minutes to play. Gameplay happens fast, and victories could come out unexpectedly. Keep an eye on other player’s collections to see how close they are to obtaining three property sets!

Question: Can You Steal a Property Wild Card in Monopoly Deal?

Answer: Yes. You can steal a Property Wild Card with a Sly Deal card, a Forced Deal card, or a Deal Breaker card. However keep in mind that the Property Wild card has no monetary value, so it cannot be used for payment.

Answer: It takes less than 15 minutes to learn how to play Monopoly Deal, and once you’re playing it becomes quite easy to remember in the future. If you’ve played traditional Monopoly, you’ll see how many of the same rules cross over into Monopoly Deal.

Should I Get Monopoly Deal?

If you’re looking for a quick-paced version of Monopoly that you can take on the road, Monopoly Deal is the perfect option. Games can be played fairly quickly, and new players can be dealed in once a round ends.

Be careful though- it’s extremely addicting and will have you coming back for more. Once you win against a friend, they’ll quickly be asking for revenge! Nicholas Morris.