You probably know Stratego as an intense two-player war game where the objective is to capture your opponent’s flag. If, like me, you’ve often found yourself wishing there was some version of Stratego out there that can be played by more than two people…well, you’re in luck!

Stratego Conquest is a new and exciting version of the classic game that supports up to four players, which is cause for celebration for those of us who have been hoping to play with more friends for quite some time.

This version of Stratego taps into an era that is, thanks to shows like Game of Thrones and The Witcher, at the forefront of many people’s imaginations. 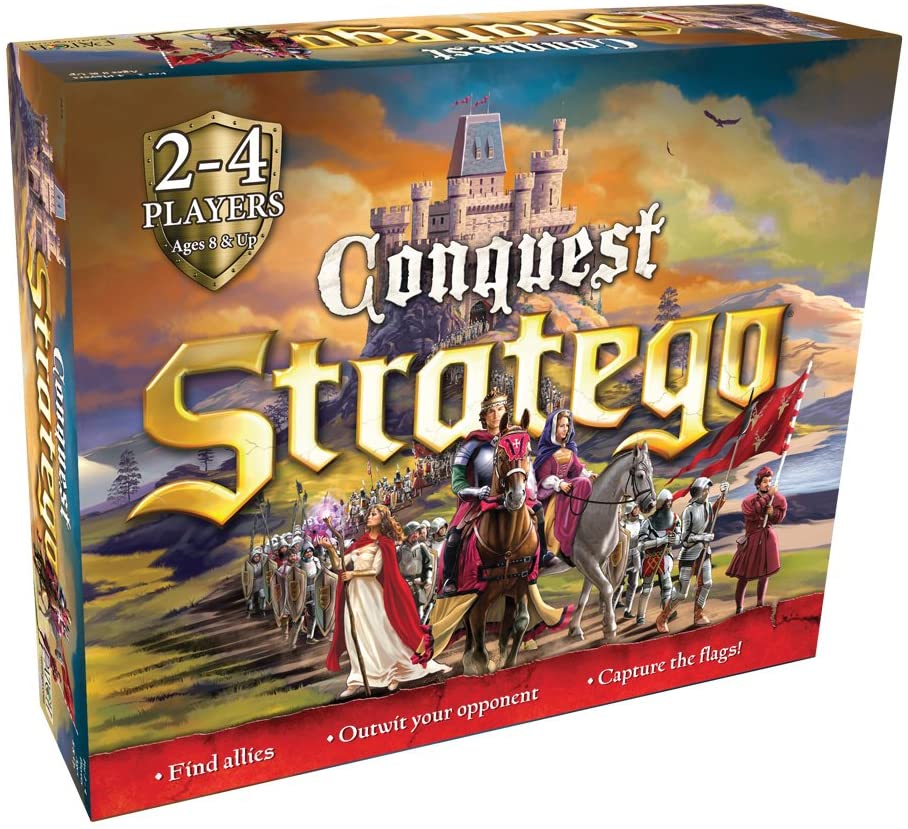 An increased number of players isn’t the only thing that’s new in Stratego Conquest; the game has been transformed to have a distinctly medieval feel.

Navigating the map of Westeria, the fictional kingdom in which the game is set, you will need to do more than simply capture the flags of your opponents; you’ll also need to watch out for spymasters, sorceresses, and traitors as well!

With colorful pieces and a thoughtfully designed map, this is Stratego as you’ve never played it before.

Stratego has existed in various forms since the early twentieth century, with one of the earliest versions, L’Attack, originating in France. The simple premise – to capture your rival’s flag – is what makes the game so enjoyable and, crucially, replicable. It has been in production in the US since 1961.

The fact that there is a governing body for the game, known as The International Stratego Federation, attests to its widespread popularity. There is even an annual Stratego world championship, so if you’re looking for a strategy game to become invested in, this is a good one to choose.

Stratego Conquest was released in 2015, much to the delight of the Stratego community. Its biggest selling point is undoubtedly that it allows up to four players to participate in a game – something that was previously unheard of.

This edition of Stratego is much closer to the original than some other versions (such as Stratego Waterloo), but it features an asymmetrical board rather than the usual square layout. 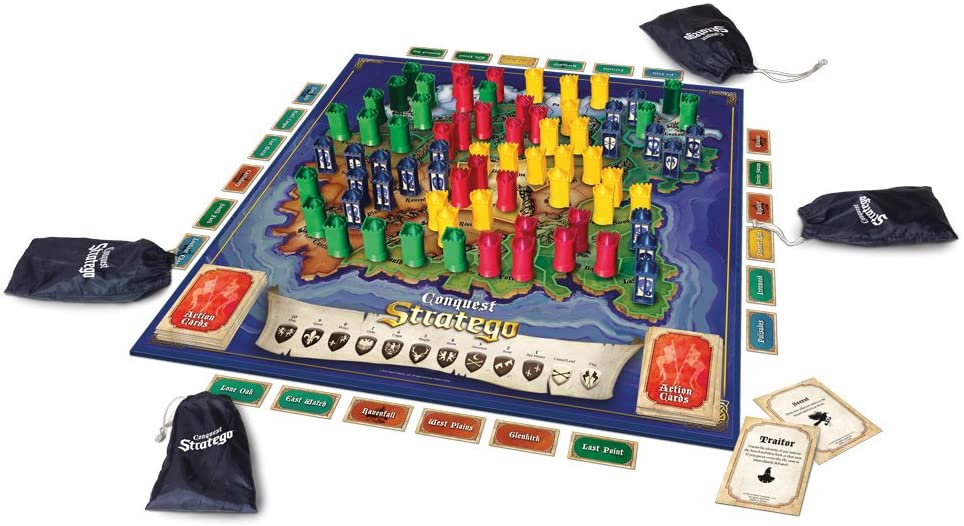 Before you start to play, you’ll need to spend ten minutes or so setting up the board.

Lay the game board out on a flat surface. The map contains twenty-four territories in total, each divided into three zones, so you’ll need to place each territory token on its matching territory.

Eight of the territories contain cities:

It’s important to note that there are several mountain ranges on the map, all of which are impassable by all units.

Next, remove the Traitor card from the special action deck, placing it at the bottom. Place this deck in the “draw” area on the board.

Each player should be allocated one side of the board. Then, they must choose a color and put their unit markers in their reserve bag.

To determine who takes the first turn, each player randomly draws a unit from their reserve bag.

The person who draws a unit of the highest rank is the starting player.

Beginning with the starting player, players take turns choosing territory tokens until they’re all distributed. Every territory is controlled by one player in the initial setup. All Territory Tokens are placed in front of the player who controls them.

Only one unit can occupy each zone, with a maximum of three per territory. The game begins once each player has positioned their units, and the starting player is the one who begins the game.

The aim of the game is to defeat the armies of your opponents by capturing their flags.

When a territory is occupied by units belonging to just one player, that territory is considered controlled. The controlling player keeps the territory’s token for as long as he or she is in control of it.

When a territory is unoccupied or occupied by units from multiple players, it is considered contested.

Each turn, players must do two things: draw and then move.

Begin by counting your Territories Tokens – you should have one for each territory you control, but only if you are the sole occupier of that territory.

Divide the number of Territory Tokens you have by two and draw that number of action cards from the draw pile. If the number is uneven, round down.

After placing the action cards face up on the table, select which one you’d like to use. Follow the action on your chosen card, then discard the rest of the cards face up in the “discard” area.

The number of cards in the draw pile is always public knowledge. When there are no cards left, you can shuffle the discard pile to create a new draw pile.

The cards are as follows:

Move one of your units to a zone that is adjacent. If the zone contains an enemy unit, resolve the combat. At the beginning of your turn you can receive one additional movement for each City Territory that you control.

No matter what your situation is in the game, you always get one move at the beginning of your turn (although if you only have a Flag or Cursed Land, you can’t move). This isn’t optional; you must make a move.

Units may only be moved from one zone to another adjacent zone, with the exception of Scouts. Moreover, they can only move to an adjacent zone that shares a border with the unit’s current zone.

Two units of the same color are not permitted to occupy the same zone apart from for the purpose of combat. Crucially, units cannot jump over or move through occupied zones. The Flag and Cursed Land always remain in the same place.

The Scout can move across any number of occupied zones. However, performing this movement will reveal the identity of the Scout, so proceed with caution. 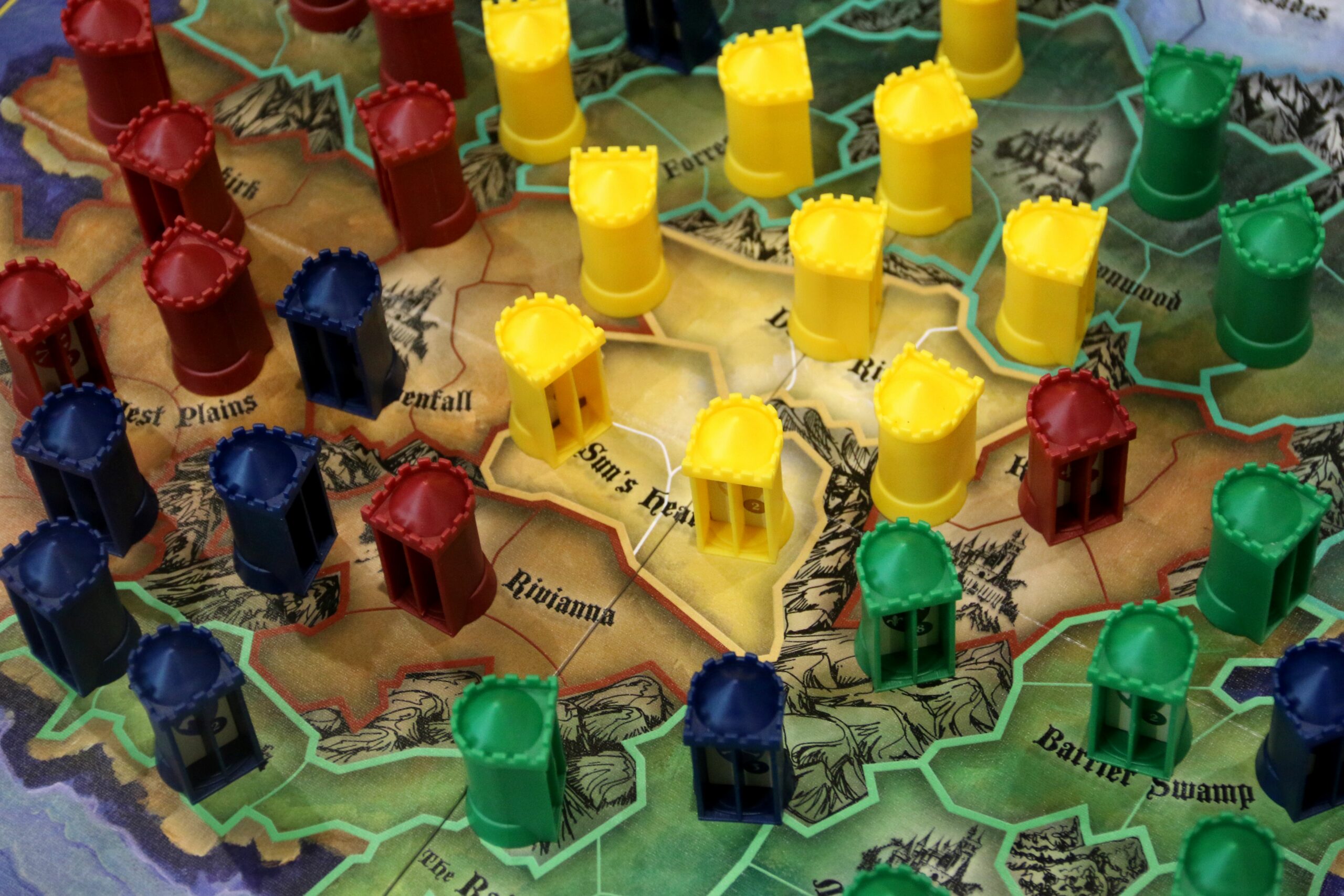 Combat begins when you move one of your units into a zone that is presently occupied by an enemy unit. When this happens, both players reveal their units to all players.

The unit with the higher rank is the winner; the player with the defeated unit places the unit into their reserve bag. However, if the rank of both units is equal, they are both defeated.

When a unit attacks Cursed Land, the unit is defeated and placed in the reserve bag. Only a Sorceress is capable of attacking and defeating Cursed Land.

The Flag can be captured by any unit. When your Flag has been captured, you can no longer draw action cards, and the Flag is placed in front of the player who captured it.

Fortunately, all is not lost – there is a way to recapture your Flag. To do so, you’ll need to use one of your remaining pieces to capture the Flag of the opponent who captured yours. If you succeed, you can place your Flag in any open zone on the board.

If you manage to capture an opponent’s flag, but you don’t have your own Flag, your opponent’s Flag goes to the player who also possesses yours.

End of the Game

To win the game, your Flag must be the only one left on the board. All of the other players’ flags should have been captured.

Who Is Stratego Conquest for?

Stratego Conquest is recommended for two to four players aged eight and above. However, because of the level of strategy involved in the game and its complexity, it’s likely to be enjoyed the most by slightly older children and teenagers (as well as adults, of course).

Even if you’re completely new to the world of Stratego and conflict-based strategy games, Stratego Conquest is still highly enjoyable. Although it can take a little while to get your head around the rules, once you learn how the game works you’ll quickly become absorbed by it!

I wouldn’t necessarily call this a family game because younger children may struggle to play, and it doesn’t quite have the widespread appeal required to capture the attention of a big group of people, but it is a fantastic choice if you want to introduce your child to strategy games. 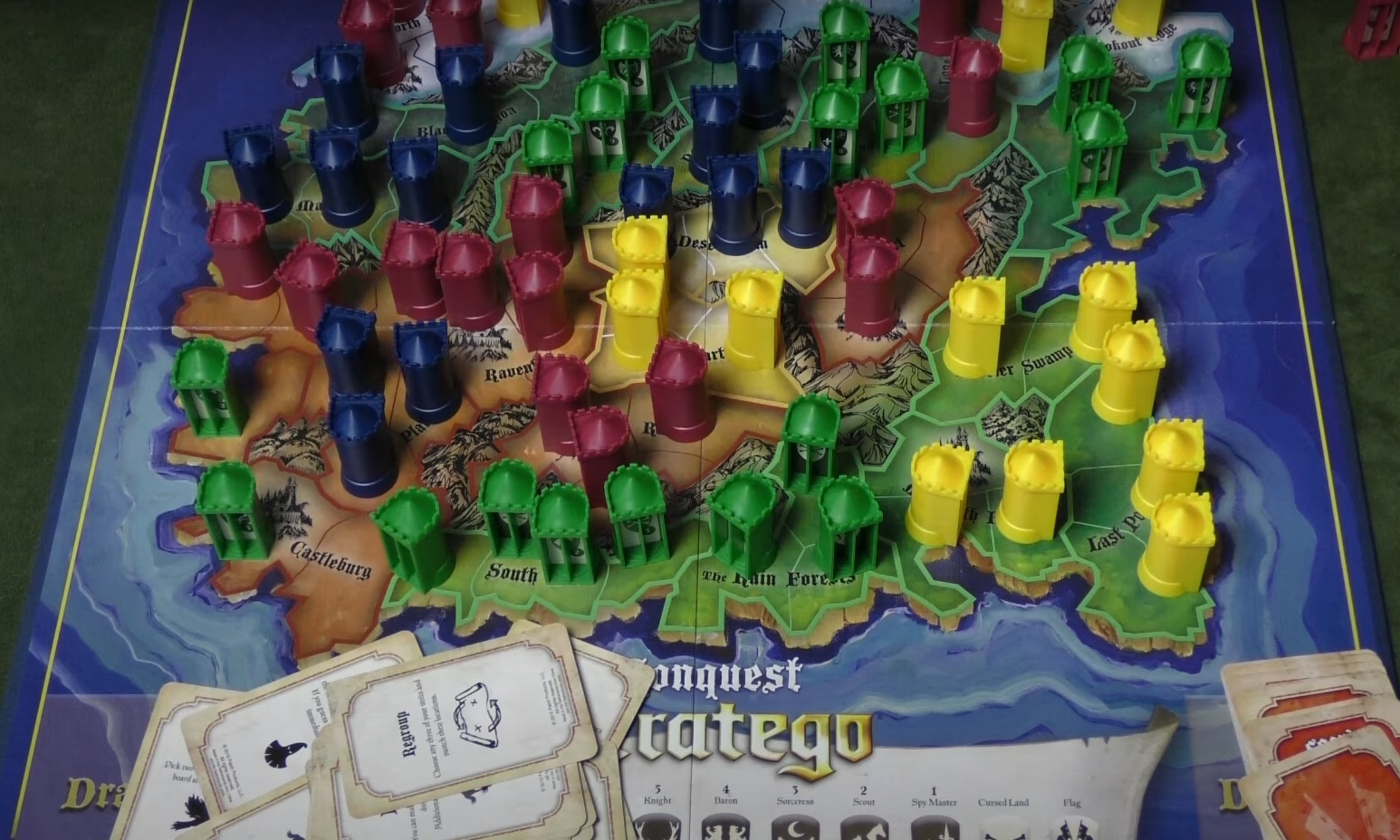 How Many Pieces Are There in Stratego Conquest?

Here is a list of the components included in the game:

Whether you’re keen to find more games like Stratego Conquest or you’re on the hunt for something a bit different, these are my recommendations. 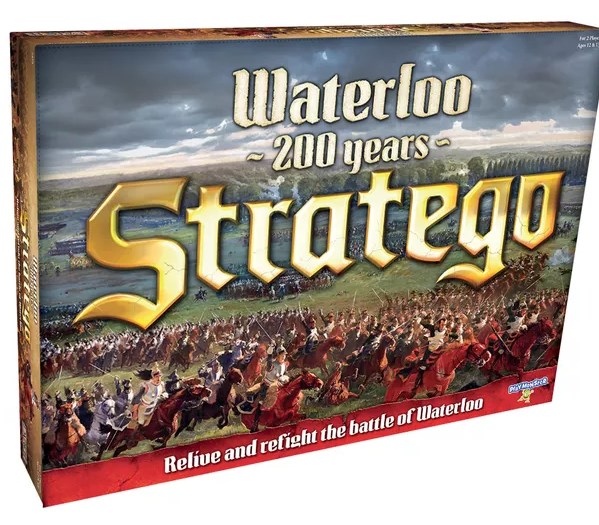 Stratego Waterloo combines the best elements of original Stratego with the immense gravity of real historical events to create a game that is simply thrilling. You have the power to change the course of history, and that really adds a sense of urgency to this highly tactical board game.

Find out more by reading our Stratego Waterloo guide. 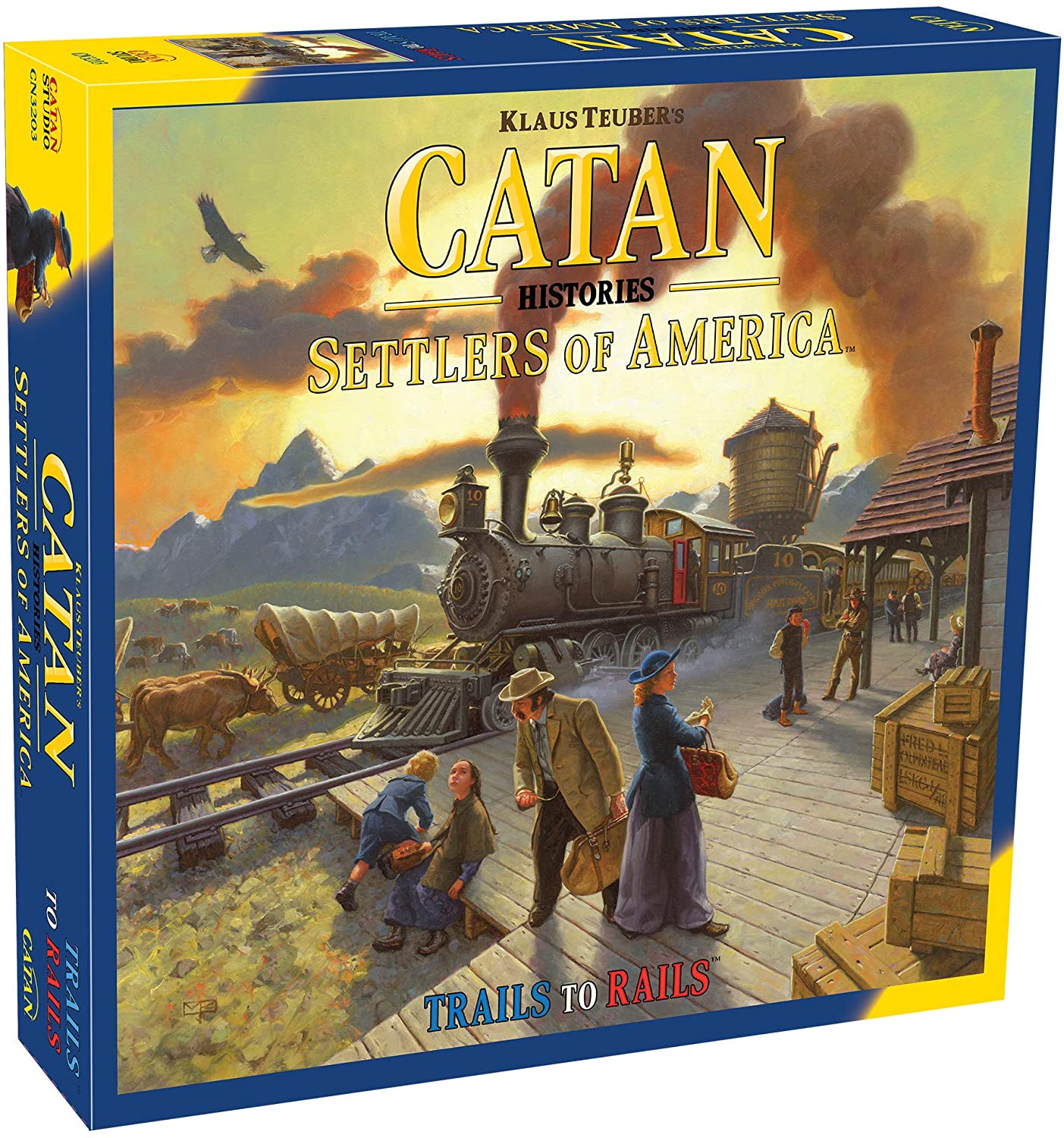 Catan is one of the most well-known (and best-loved!) board games on the market today, and it actually shares a lot of similarities with Stratego, though it’s primarily about building settlements rather than fighting and destroying them. Nevertheless, both games demand a tactical, strategy-based approach, and the Settlers of America edition has a fantastic historical theme too.

Read more about Catan Settlers of America in our comprehensive guide. 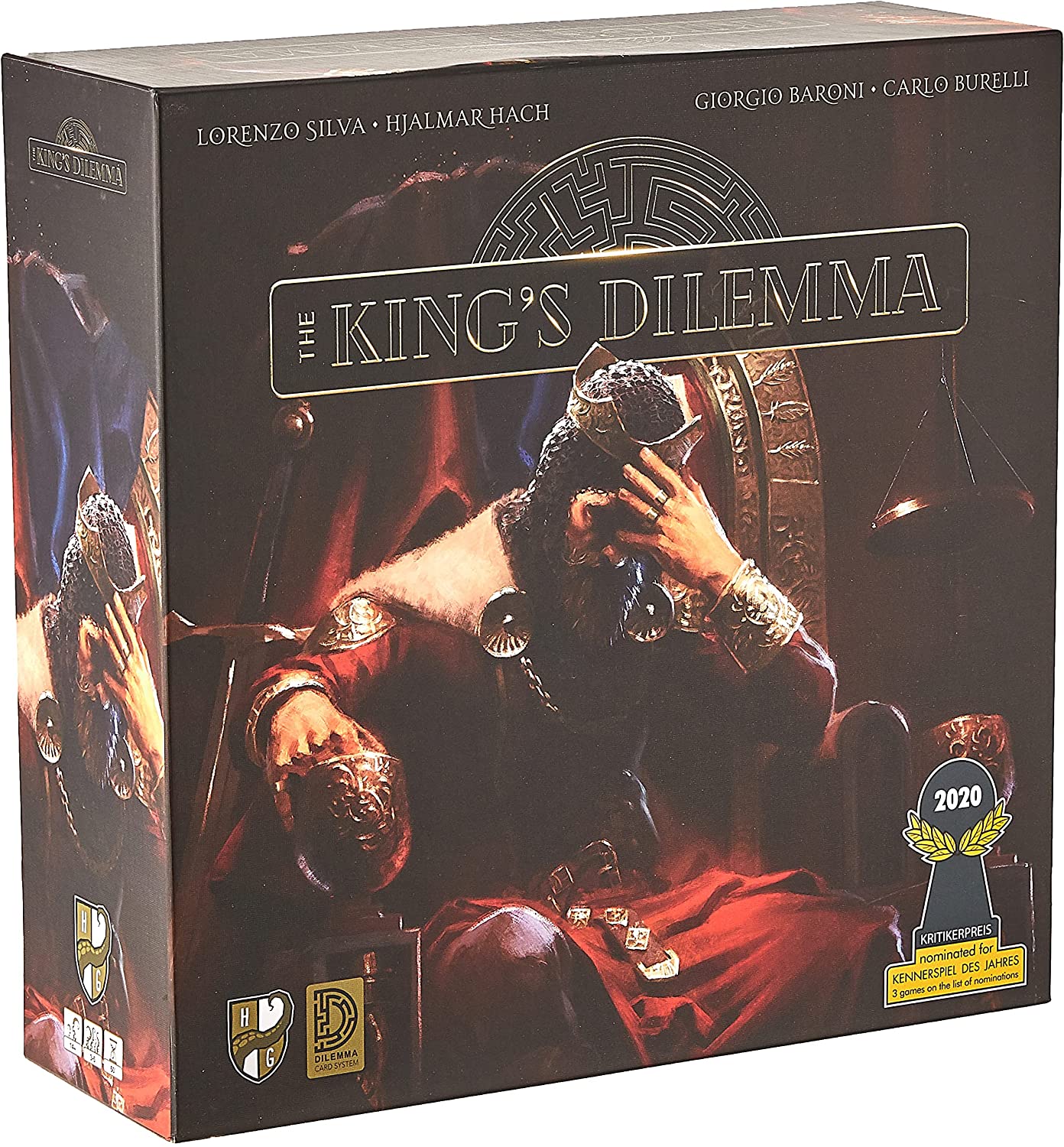 This recommendation is a little different, but, like the other games I have included in this section, it’s a strategy-based game that demands careful thought. King’s Dilemma has a similar medieval theme to Stratego Conquest, and the aim of the game is to influence the King’s decisions to bring about outcomes that are beneficial to you and your house.

Check out our King’s Dilemma game guide for more information.

Stratego Conquest – Is It Worth Buying?

Stratego Conquest is, in my opinion, better than the original game. It includes all the features that many of us have come to know and love, but the medieval setting gives the game a new dimension, and playing with four people adds a level of difficulty that makes it even more enjoyable.

Even if you’re not a fan of combat- and warfare-based games, Stratego conquest is about so much more than that; it’s a game that makes you think tactically, which is a valuable skill, but it’s also one of those games that you can play time and time again without getting bored.

For that reason, if you like coming up with strategies to outmaneuver your friends, this is the game for you.

Question: Are there any other versions of Stratego?

Answer: There are a number of other Stratego games available, including Stratego Assassins Creed, Stratego Legends, Stratego Lord of the Rings, and – of course – Stratego Waterloo.

Answer: The game is just as good whether you play with two, three, or four players – it really doesn’t matter!

Answer: It allows up to four players, so depending on the size of your family, you could play it with them, but overall I wouldn’t describe it as a family game.
Check out our guide to the best family games for more suitable suggestions.

Question: What are the unit ranks in Stratego Conquest?

Question: Do you have any strategy hints for playing Stratego Conquest?

Answer: It’s good to place Cursed Lands on city territories to help hold them. Also, use a Scout or Surprise Attack to move a unit near enemy units. Then attack on subsequent turns using a redeploy card with a more powerful unit.