Do you love testing your knowledge and ability when you watch fast-paced game shows? Do you find yourself shouting the answers at the TV, wishing you could get involved? If so, then the board game 25 Words or Less is the game for you!

25 Words or Less combines all the tension and excitement of the show it’s based on with a new format that you can play almost anywhere. You’ll have to be sharp-witted to keep up with the action as you battle it out to guess the right answers, with teammates using as few words as possible.

The original show, hosted by Meredith Vieira, has proved a huge hit with people of all ages thanks to frequent celebrity appearances…can the board game edition live up to the same standard?

Find out everything you need to know, including how to play, in this 25 Words or Less board game guide.

25 Words or Less: an Overview

25 Words or Less is a tense, fast-paced game where players form two teams, and a designated clue giver from each side looks at a list of five secret words they have to get their fellow teammates to say.

The only problem? They have just 25 words and 60 seconds to give their teammates enough clues to guess the secret words. The time pretty much flies by, and so does the word count – especially since you can’t use gestures or sounds!

It’s definitely a game for people who are good under pressure.

The most recent version of 25 Words and Less – the game has a long history which I’ll cover in detail a little later on – was launched in April 2021 by USAOpoly, an eminent American board game publisher that has been around since 1994.

25 Words or Less takes its place as one of the best-known word games out there, but it is by no means the only one of its kind. In fact, there are thousands of similar board games which aim to test players’ knowledge and use of language.

Examples include Monopoly, Upwords, and Boggle, to name but a few. Likewise, Charades has earned its fame from a similar premise, but instead of using other words to guess the answer, players use gestures and mimes.

Ultimately, the recent success of games like Wordle, an online five-letter word game that has gone viral, shows that games of this kind are certainly having a moment in popular culture.

Origins of 25 Words or Less 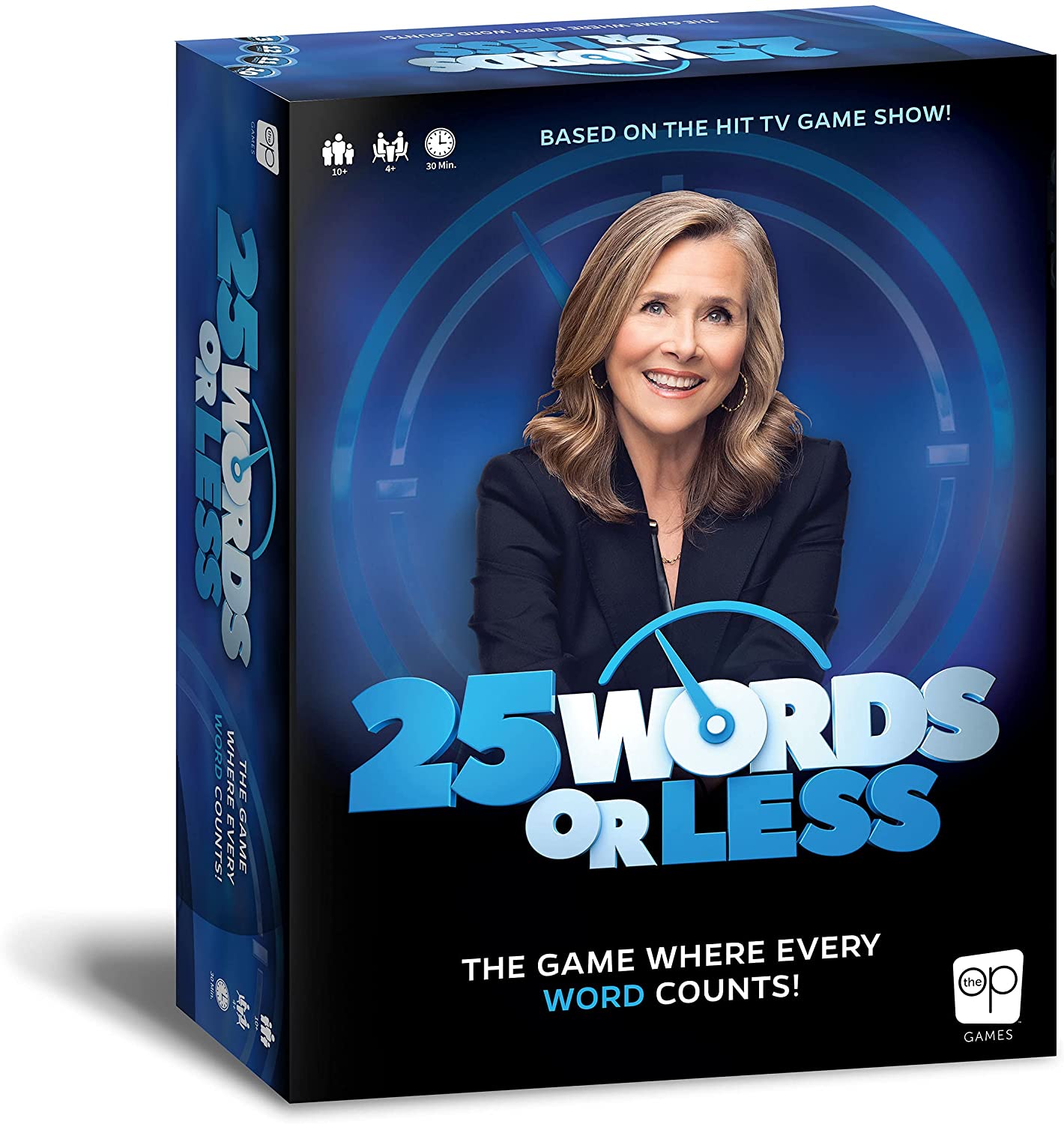 There’s actually more to the history of 25 Words or Less than first meets the eye. Many people believe that this new board game is based on the hit TV show, which in some ways is true, but what you probably don’t know is that the show itself was actually based on a board game.

Yes, before 25 Words or Less hit the small screen and underwent a snazzy makeover, there was a board game that went by the same name. Indeed, its success is what inspired the creators of the game show.

This original game was published in 1996 by Winning Moves Games. In 1997 it won the prestigious Games Magazine “Game of the Year” award, and an updated version was released in 2006 called 25 Words or Less: People, Place and Things Edition. It’s no longer possible to buy this version of the game.

Then in 2018, as we know, the TV show came out, giving the game a whole new look and feel. It first aired in summer on nine Fox Television Stations as a trial run; following the trial’s immediate success, the regular series began in 2019.

Compared to the original board game (the design of which was highly colorful and fun), the show curated a comparatively streamlined aesthetic, bringing it firmly into the modern day.

Likewise, the 2021 board game utilizes this same aesthetic; the components are designed to match the show’s studio design to capitalize on its success.

You have just 60 seconds and 25 words or less of clues to get your teammates to say the five words that are written on your card. If they guess all five correctly, your team wins the card. If they fail, your rival team steals the card. The first team to earn ten cards wins the game.

How to Play 25 Words or Less 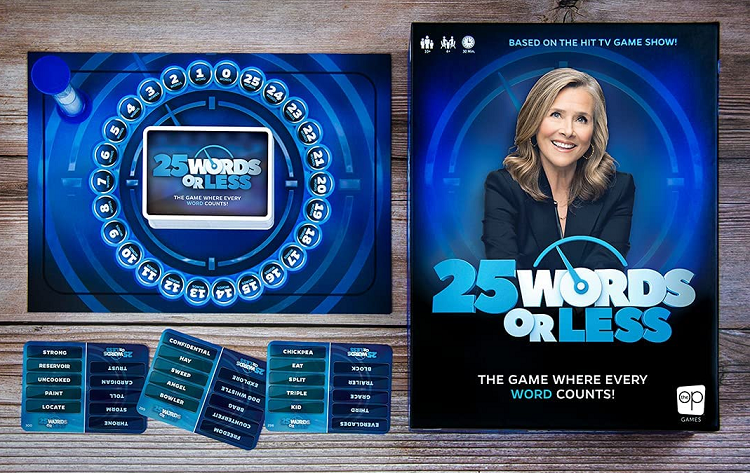 Setting up the game is relatively quick, so you’ll be playing in no time. Here’s how to get started.

Select a player who will be the “clue giver” for this round.

Pick up the top card from the deck. The two clue givers have approximately fifteen seconds to study the five secret answers on the card, making sure the other players do not see them under any circumstances. 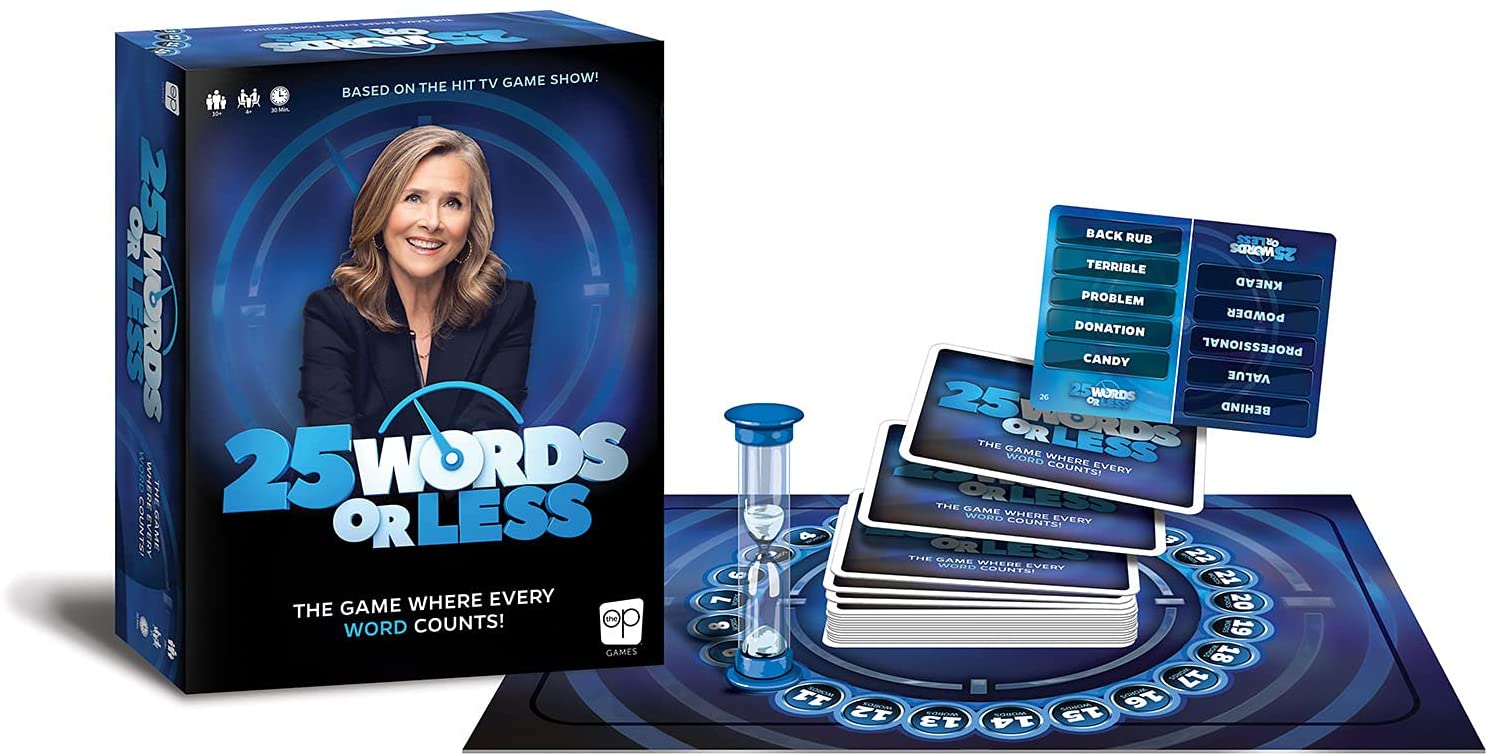 As soon as the sand timer is turned over, the clue-giver has just 60 seconds to get their team to guess all five answers.

Every time the clue giver says a word, the judge moves the sand timer one pace, giving an indication of how many words are left.

Each word counts, even if the same one is repeated a number of times. There are, however, three words that don’t count:

Guessing continues until the team guesses all five answers or the clue giver says more words than allowed/runs out of time/breaks the rules.

For the next round, you should choose two different team members to be clue givers.

The first team to collect ten cards wins the game! 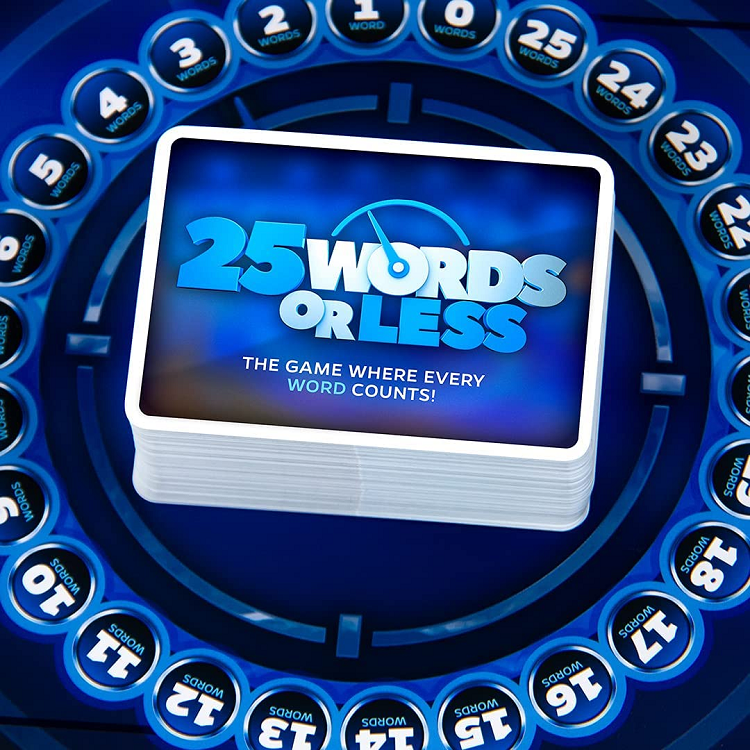 25 Words or Less requires at least four players but can extend to any number beyond that within reason since the game is played in teams. The recommended age is 10+, but to play at this age, you’d need an advanced reading age as some of the words can be pretty challenging.

If you’re looking for a game suitable for younger children, we have a guide to the best board games for five-year-olds and for four-year-olds.

Any wordsmiths or fans of games like Scrabble will love the linguistic element of 25 Words or Less, requiring the clue giver to use as few words as possible to convey maximum meaning.

I’d say that it’s more of an adult’s game than a kid’s one owing to the fact that, at its heart, it’s functional and knowledge-based rather than overtly fun. The competitive element is crucial, but it also makes the game quite serious.

25 Words or Less would make a decent family game – providing there aren’t any very young children in the family – because it encourages teamwork and allows everyone to get involved. Plus, it’s ideal for large gatherings.

How Many Pieces are there in 25 Words or Less?

There aren’t many pieces involved in the game, so it’s easy to set up, pack away, and store.

Alternatives to 25 Words or Less

Here are some similar board games I’d recommend.

Scrabble is a board-and-tile game that’s excellent for using and expanding your vocabulary. It was first conceived during the Great Depression by an unemployed New York Architect. Players compete by forming words using letter tiles that are worth points. There are also numerous squares on the board that offer extra points, such as a triple word score. 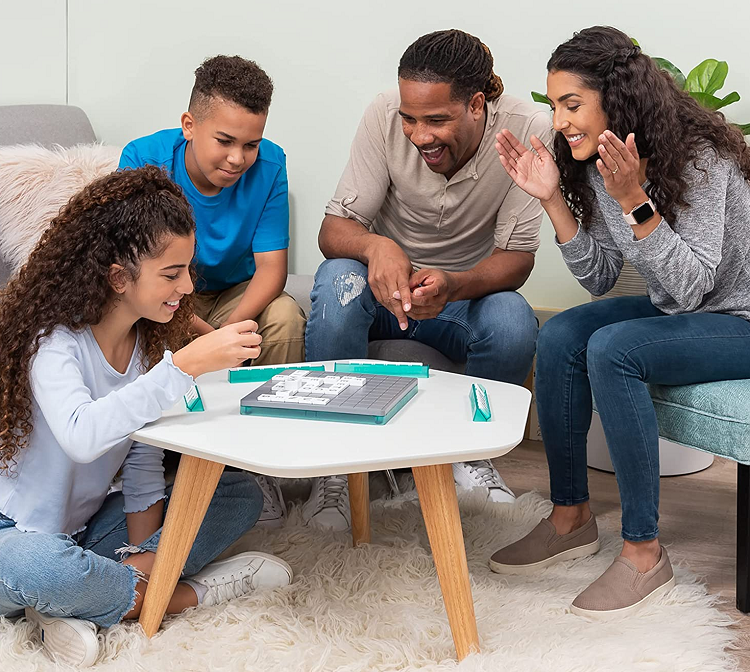 Upwords utilizes letter tiles in a similar way to Scrabble, requiring players to play words across or down the board. You can make new words and alter existing words in this game of intense strategic wordplay. 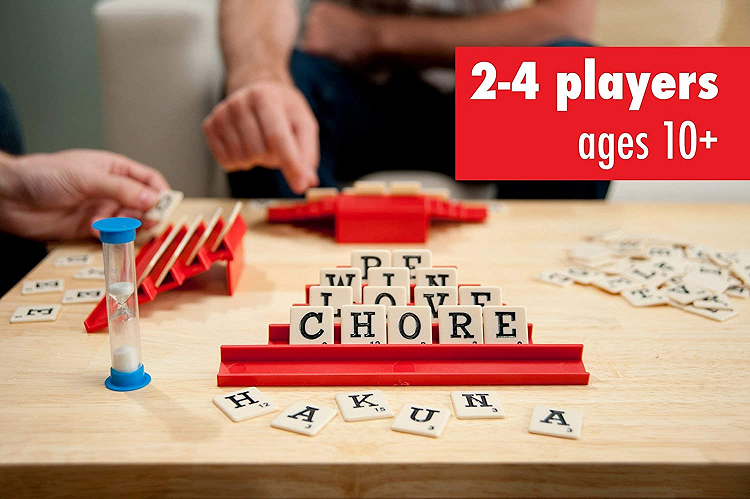 Dabble is perfect for fans of the viral game Wordle, and it’s also a great brain training aid for kids and adults alike. Using your twenty letter tiles, you have to spell five different words – the first person to do so wins! The game provides a lifetime of fun despite its apparent simplicity since the letter combinations are endless.

Question: Can You Play with Three Players?

Answer: The idea of the game is to play in teams, and ideally, teams should be made up of at least two people – one clue giver and one guesser.
However, if you desperately wanted to play the game with three people, you could adapt it by having one person as the clue giver and the two others working together to guess. This takes the competitive element out of the game, but the challenge of using 25 words or less still remains.

Question: Where Can I Buy 25 Words or Less?

Answer: You can purchase the game from Amazon here.

Question: Is the Old Version of 25 Words or Less Still Available?

Answer: No, the version that came out in the 90s is no longer available unless you find it for sale second-hand.

Question: How Similar is the Board Game to the 25 Words or Less TV Show?

Answer: The game is almost identical, apart from the final round of the show, which doesn’t feature in the game.

Question: Can You Play 25 Words or Less if You haven’t Seen the TV Show?

Answer: Yes, absolutely! The game comes with easy-to-follow instructions so you can play even if you’ve never heard of the show before.

25 Words or Less is an exciting game that manages to succeed in one area where many other board games fail: in accommodating a large – in fact, almost limitless – number of players. For that reason, it’s perfect if you need a way to keep guests entertained.

At times the words can be challenging – too much so, in my opinion – and this can lead to players becoming frustrated. When this happens, it takes some of the fun out of the game, especially when there are children involved, so I’d think carefully about who you want to play with before buying it.

There’s no doubt that the 25 Words or Less TV show has found a winning formula, and I think this formula translates fairly well to the game. That in itself is commendable since many board games fail to live up to the films or shows on which they’re based.

For that reason, if you’re an existing fan of the TV show, I’d wholeheartedly recommend buying the 25 Words or Less Board Game because it feels like bringing the excitement of the studio into your living room.

However, if you’re a regular board game fan looking to expand your collection, I’d definitely say there are better word-based games out there.