If you’re a fan of the immensely popular Marvel cinematic universe, you’ll be pleased to hear that Monopoly, the fast-trading property game which has been a family favorite since 1935, has been revamped with an Avengers-themed twist not once but twice.

In one version of the game, you must rescue the universe from forces of evil by collecting power as you pass go and using it to save locations; in the other version, rather than buying or saving locations, you assemble an impressive team to save the universe by drafting heroes.

This guide covers everything you need to know about Avengers Monopoly, including the origins of the game and how to play, as well as a few alternative games you might enjoy.

Both editions of Avengers Monopoly that are covered in this guide are by Hasbro.

In this edition of Avengers Monopoly, players take on the role of their favorite Avenger and travel around the board, saving as many locations as they can.

As such, the properties that existed in the original version of Monopoly have been transformed into locations from around the Marvel universe, and the money that was used to purchase them is now power which can be used in much the same way.

Likewise, the community chest and chance cards are S.H.I.E.L.D and villains cards in this edition of the game. The board, rather than being square, is shaped like the Avengers logo, but it still has the locations around the outside like the traditional game.

The player with the most power once all locations have been saved is the winner.

This Avengers Monopoly game is an Amazon exclusive, and the square board closely resembles the classic Monopoly game. However, there is an interesting twist: rather than collecting locations, you collect heroes.

There are 28 heroes up for grabs, including Maria Hill and Nick Fury.

The game includes Infinity Gauntlet and Stark Industries cards that will either bring a player good luck or cost them somehow. 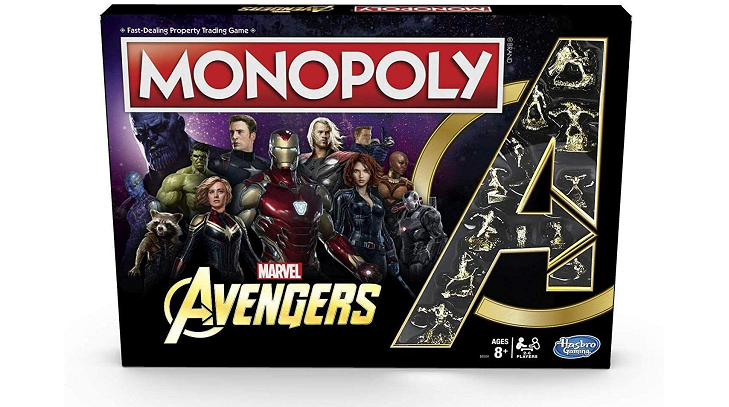 In all versions of Monopoly, the aim of the game is to remain solvent (whether this is in money or power) while other players go bankrupt and to collect as many locations (or in some cases, heroes) on the board as possible.

Avengers Monopoly is no different. The last player remaining on the board is the winner.

Each turn, the dice are rolled, and the player moves their piece around the board according to the sum of the two numbers.

After passing go, players usually receive a bonus in whatever currency is relevant to the game. In Avengers Monopoly, this is power.

The Origins of Avengers Monopoly

The Marvel Cinematic Universe (MCU) has an immense cultural presence today, but the Avengers first found their fame in comic books rather than on the big screen. Jack Kirby and Stan Lee made the original comics in 1963.

Altogether, there are twenty-eight Marvel superheroes who make up the Avengers team, including firm favorites like Iron Man, Captain America and Thor.

Put simply, the idea behind this all-star cast of heroes is that, when assembled, they become earth’s first line of defense against some of the evilest and powerful threats in the universe.

The Avengers operate as a response team formulated by S.H.I.E.L.D. (Strategic Homeland Intervention, Enforcement and Logistics Division), an organization that, within the world of Marvel, is designed to protect national and global security.

By contrast, Monopoly finds its origins in reality rather than fiction. It can be dated back to 1903 when Lizzie Magie, a staunch anti-monopolist, created a game that she designed for a specific purpose: to explain the single-tax theory of Henry George.

How to Play Avengers Monopoly 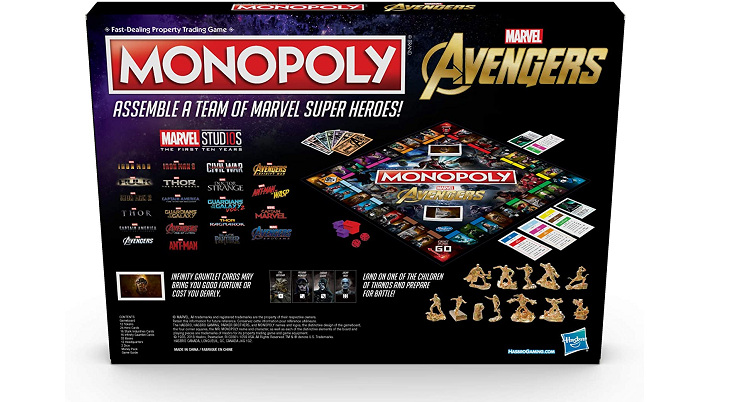 Since both editions of Avengers Monopoly referenced at the beginning of this guide follow the same basic principles and structure, I am going to focus on the first version in which players collect power to save locations on the board from villains.

There are a few key differences you should be aware of between classic Monopoly and Avengers Monopoly. They are as follows:

Setting Up the Game

Here are some of the most important spaces on the board.

As mentioned earlier, the aim of the game is to save as many locations as you can within the Marvel Universe. Once all the villains are defeated, the player with the most power wins!

The first player to start moving around the board is the one that is most like Hulk.

When you start a turn, you must roll the dice and move your token around the board clockwise according to the numbers that were rolled.

Just like in the original Monopoly, every time you pass go, you collect 200 in power. At this point, you can also reactivate your superpower if you use it.

Rolling a double results in another turn. However, roll three in a row, and you have to go straight to jail.

You can also choose when to use your superpower; once you have done so, you must flip the card over as it can only be reactivated the next time you pass Go.

Who is Avengers Monopoly for?

Avengers Monopoly is recommended for children of eight years and above. There must be at least two players for the game to work, but there can be up to six.

As you might have guessed, this version of Monopoly is best for Marvel fans who are already familiar with the Avengers and the fictional world they inhabit. However, other people who are interested in the game might be better off trying the original version of Monopoly, which has a more widespread appeal.

Nevertheless, it’s perfectly possible to play and enjoy Avengers Monopoly even if you have never seen any of the Marvel films or read the comics.

The best thing about Monopoly is undoubtedly that it can be played by the whole family, so the game is still appealing and fun whether you’re six years old or sixty years old.

If you’re interested in finding more family-friendly games, we have a guide that can help you.

How Many Pieces are There in Avengers Monopoly?

Other Versions of Monopoly

If you’re a fan of Monopoly, but the Avengers edition just isn’t for you, here are a couple of other versions you could try. 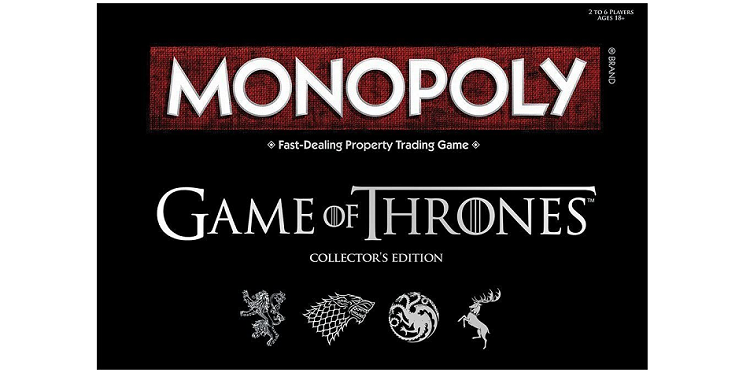 Game of Thrones lends itself perfectly to a game of Monopoly. Choose which token you’d like to play as (The Iron Throne, Crown, Direwolf, Three-Eyed Raven, Dragon Egg, or White Walker) and battle against your opponents to win control of Westeros and sit on the Iron Throne. 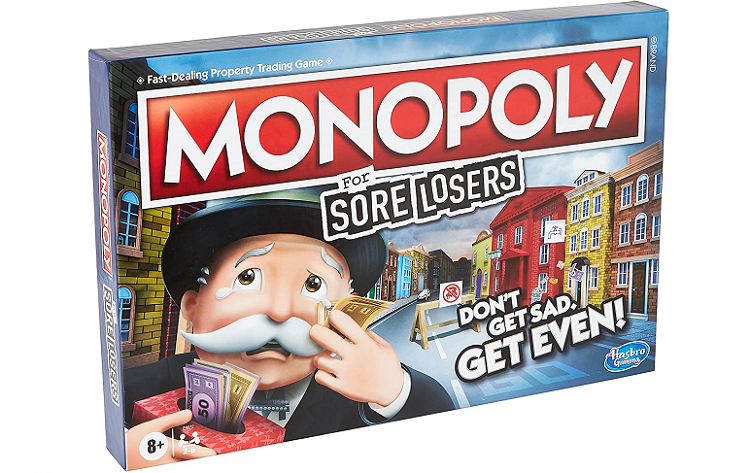 Monopoly for Sore Losers puts a hilarious twist on the classic game, playing into the ongoing joke that it causes family feuds thanks to players who can’t take losing. In this version, things that would usually cause a player to lose, such as going to jail, can help him or she get ahead!

Whether you loved Avengers Monopoly and are looking for something similar or you want to try something totally different, here are my suggestions. 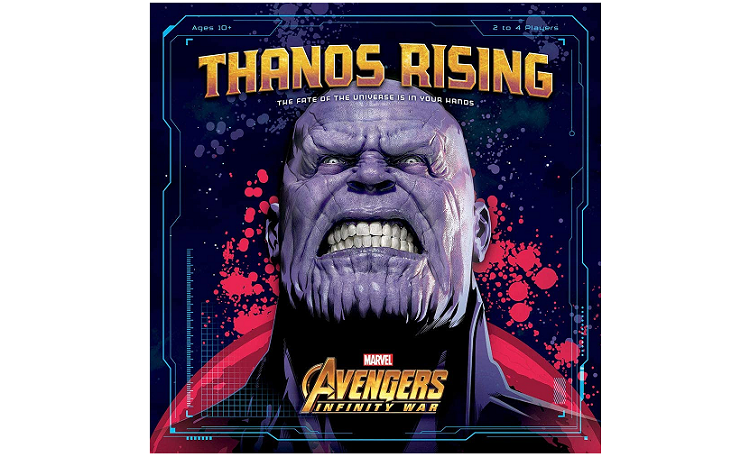 Thanos Rising is an Avengers-themed cooperative dice and card game. In it, players take on the role of iconic Marvel heroes who must recruit a team to defeat Thanos and prevent him from acquiring all six Infinity Stones. 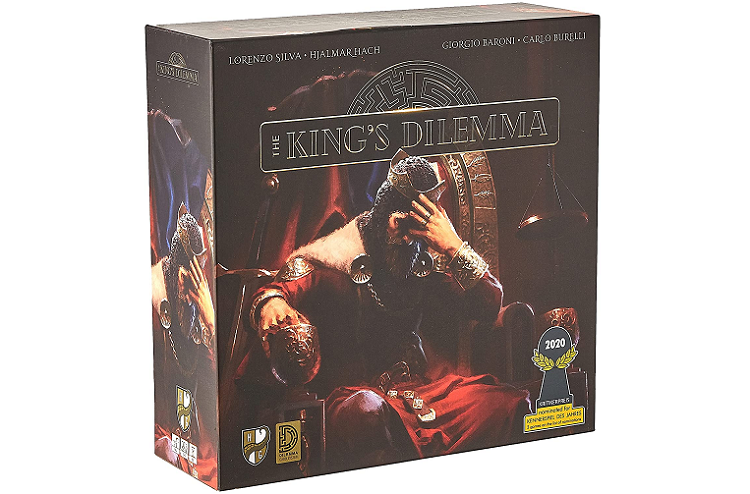 If you’re a fan of games like Avengers Monopoly where you are tasked with saving the world (or at least controlling its fate), but you want something a little more mature and complex, The King’s Dilemma might be for you.

Read our full guide to the game here.

Avengers Monopoly – is it Worth Buying?

The answer is…it entirely depends on your motivation for playing the game. Any Marvel fans out there will certainly enjoy Avengers Monopoly; it draws different aspects of the Marvel universe together in an immersive game that allows you to become your favorite heroes.

However, if you’re looking for an exciting game that’s fun and engaging for the whole family, classic Monopoly is probably a better option.

There are other Marvel-themed games out there that are more complex if strategy is what you’re interested in – Legendary: A Marvel Deck Building Game is one that I’d particularly recommend.

Question: How Long Does it Take to Play Avengers Monopoly?

Answer: The box suggests that the game will take roughly an hour, but this can vary greatly depending on how closely you follow the rules. In addition, some families have their own Monopoly rules and different ways of playing, which tend to extend the game.

Answer: Unfortunately, it isn’t possible to play Avengers Monopoly on your own, but if you’re looking for solo games, we have the guide for you here!

Question: What Happens if You Roll Doubles?

Answer: When you roll a double, you get another turn. However, roll three doubles in a row, and you’ll have to go to jail.

Answer: Avengers Monopoly is best suited to children and younger audiences, but the whole family can play it.