In Disney’s Villainous board game, it’s time to cross over to the dark side. After all, aren’t you a little bored of rooting for the good guys? I know I am – that’s why I love the idea behind this game.

From Maleficent to the Queen of Hearts, all the most iconic Disney villains are brought to life and finally get the chance to triumph under your guidance.

Will you be successful in controlling your realm and achieving your objectives? Not only that but can you also do it faster than your opponents? For me, there’s something about competing with my friends to be crowned the evilest character that brings out my competitive side, and I’m sure you’ll feel the same.

In this Disney Villainous guide, I will equip you with all the knowledge, strategy, and villain skills you need to win, so let’s get started by learning a bit more about the game.

Villainous is an awesome multiplayer game where up to six evil villains from the Disney universe face off in a bid to rule all realms. The game’s subtitle is “the worst takes it all”, which is a perfect summary. Each character has unique abilities and various challenges they must tackle throughout the game to complete their objective and win.

To win in this battle of evil minds, you must explore your chosen villain’s unique abilities and learn how to achieve the story-based objective assigned to your character. Each turn, you move your Villain Mover to a new location and perform actions there.

Villain Guides help along the way by offering tips and advice – I’d recommend listening to them for sure! The winner is the first player to achieve their character’s objective.

I grew up watching Disney films, so you could say I’m a bit of a fan, and I’ve spent more than enough time playing Villainous to be able to offer you some handy advice. Read on to find out how to win!

First things first, you’ll have to get the board and pieces ready for a new game. Don’t worry; it won’t take long if you follow my advice.

You don’t need to worry about being the first player and not having any power; I used to refuse to go first for this reason, but it doesn’t put you at a disadvantage. 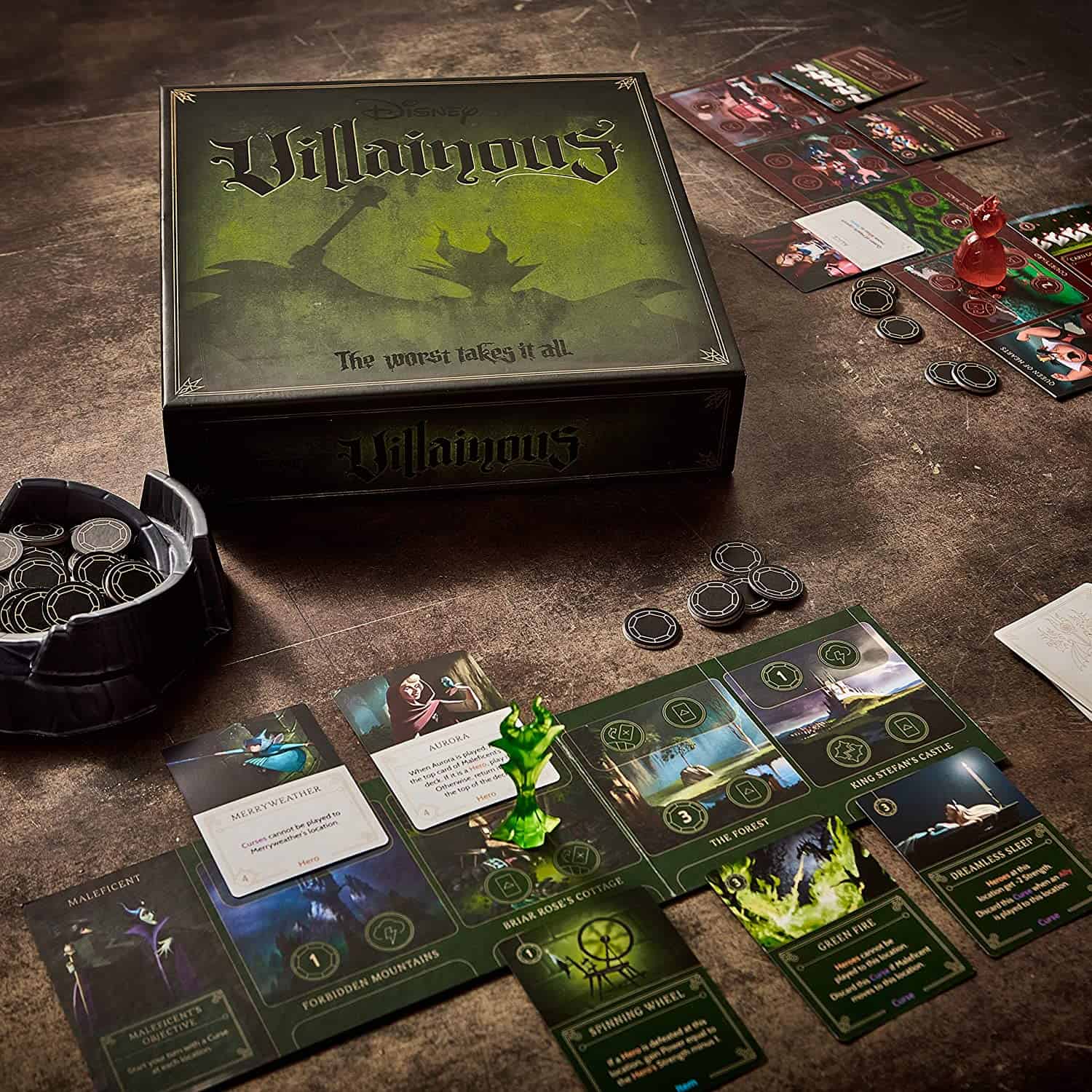 Before we get into the nitty-gritty of your first game, I’ll give you a quick overview of the different game components and how you can use them. You’ll thank me later for it when you win!

The villain guide is your lifeline – make sure you use it! It explains the details of your objective and other important information about your chosen villain.

One side of this card explains how each villain achieves their objective. Top tip: this card can help you determine whether another player is close to victory.

The board in front of you represents your villain’s realm. All cards played to your board are in your realm, and card abilities only affect cards within the same realm.

Other players play fate cards to the top of your realm.

There are four locations in each realm.

Each location has various actions you can perform when you move there.

Your opponents use these cards to hinder your progress.

You play these cards to the bottom of your realm.

Draw from this deck of cards to take action and achieve your objective.

Item cards are present in both the fate deck and the villain deck. If you want to play an item from the villain deck, you’ll have to pay its cost and put the card beneath an unlocked location in your realm. Unfortunately, if a location is locked, you can’t go there unless it says to attach it to an ally.

In that case, you have to put the item under an ally in your realm. If you don’t have any allies (unlucky), you can’t play the item.

On the other hand, items from the fate deck are attached to a hero. You must place the card under a hero; if no heroes are available, you can’t play it.

Effect cards are one-time events in both the fate deck and the villain deck. If you want to play an effect, pay its cost (on the upper left corner), follow its instructions, and discard it. These are rarer than most other cards in the game, so think carefully about whether you want to play them.

When it comes to condition cards, you need to forget everything you know (just to make things more difficult, I know). Unlike other cards in the game, they are actually played during your opponent’s turn. To be able to play the card, the condition that it sets out must be met during the other player’s turn.

Each person should have two decks of cards. Ally cards appear in the villain deck exclusively – they represent your villain’s helpers, henchmen, and pets. Hero cards, on the other hand, appear only in the fate deck; they are do-gooders who are trying to stop your evil plans (yes, you will come to hate these cards when somebody uses them against you).

Now we’re getting to the exciting part!

Now you know how to take a turn, let’s find out what actions are available.

This action allows you to take power from the cauldron equal to the number on the symbol. If you’re able to do this action, you absolutely should; power is the currency of the whole game, and you need it to activate abilities and play cards.

Choose an ally or item in your realm with an activate symbol. Pay the activation cost (if there is one) and perform the card’s activated ability.

You may play one card only from your hand. Most cards have a cost in the corner that you’ll have to pay by returning a certain amount of power to the cauldron. You can play an item or ally anywhere in your realm as long as it isn’t locked.

For this action, the first thing to do is choose an opponent and reveal two cards from the top of their fate deck. Choose one card to play and discard the other – I’d recommend choosing carefully because the aim here is to hinder your opponent’s progress as much as possible.

You can move one hero at a location of your choice in your realm to an adjacent location.

Move an Item or Ally

You may move one ally or item at any location to an adjacent location within your realm.

You can use allies in the same location as a hero to defeat that hero. It’s worth remembering that each ally and hero has a strength (shown in the lower left corner) that other cards can modify in the realm. The ally needs to have a strength equal to or higher than the hero’s to perform this action successfully.

To vanquish a hero, discard the defeated hero to your fate card pile and discard your ally or allies to your villain discard pile.

You can discard as many cards as you want from your hand, and you should always discard them face-up. One of my top tips would be to make sure you discard cards when it is the right time to do so; don’t be afraid that you might weaken your position. In fact, discarding cards gives you new options on your next turn.

End of the Game

To claim your title as champion and the evilest villain, you must be the first player to achieve your game objective. It’s that simple! Follow my advice above, and you’ll be sure to succeed.

How Many Pieces Are There in Disney Villainous?

Can’t get enough of Disney Villainous? I don’t blame you! The good news is there are lots of similar games to keep you entertained. Here are my top picks.

Disney’s magical world is combined with Monopoly’s property trading excitement in this awesome crossover game. If you’re a Disney fan, you’re in for a treat – rather than purchasing properties on the board, in Disney Monopoly, you purchase Disney films – but even if you don’t know much about the movies, you can still enjoy a much-loved game of Monopoly.

Find out more in this guide.

I can’t stress this enough: Disney Cards Against Humanity is a game for adults. In fact, it might be one of the funniest adult games on the market (I’m not exaggerating; it is hilarious). Cards Against Humanity is an iconic card game that’s enjoyable enough on its own, but add sweet Disney characters into this “card game for horrible people”, and the results are excellent.

You can find out more about Disney Cards Against Humanity here. 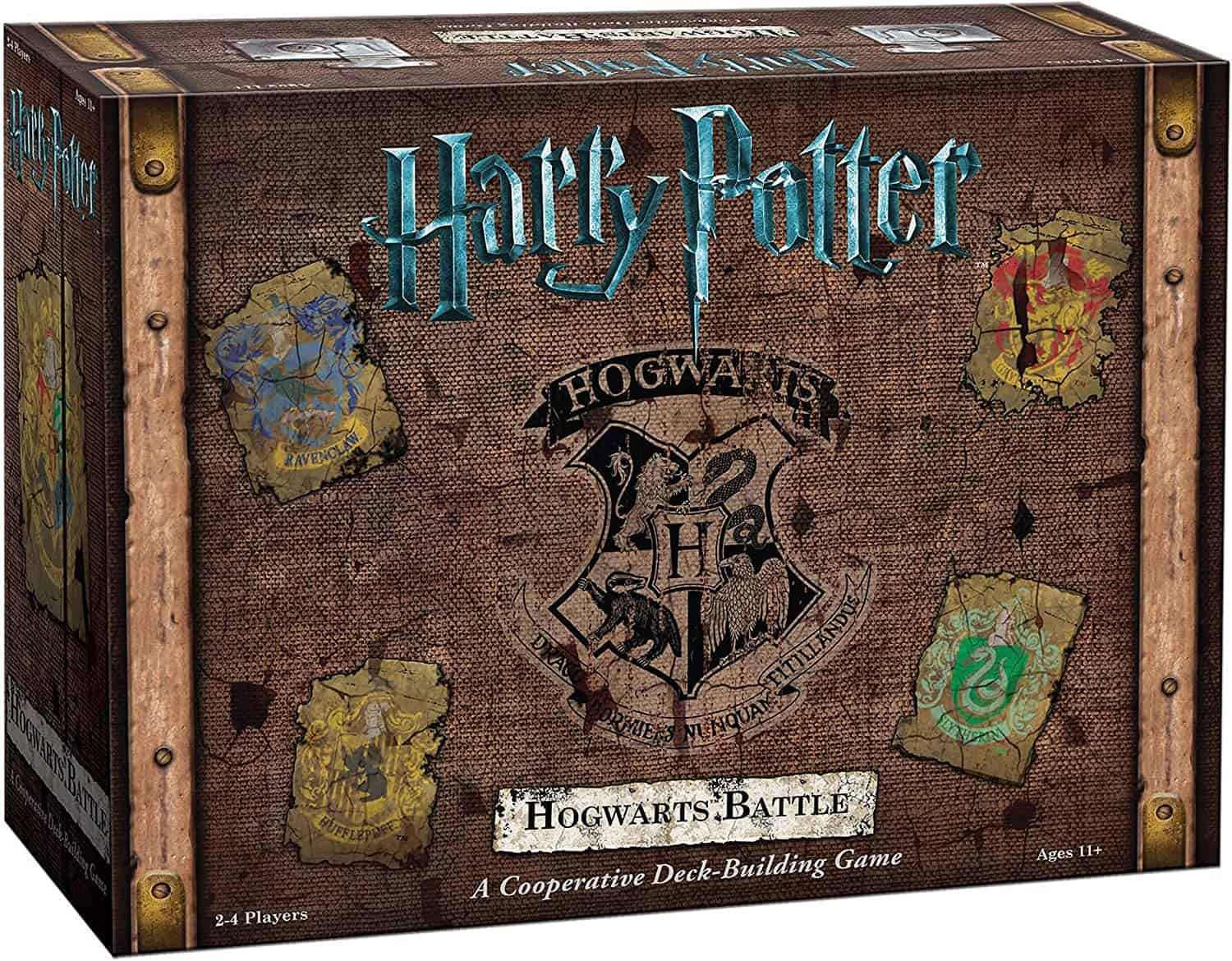 If you’re a fan of Disney, you probably also like Harry Potter, in which case you’ll love Hogwarts Battle. In this game, you take on the role of one of your favourite characters to protect the beloved Hogwarts from evil forces that want to destroy it. My favourite thing about this game is that rather than working against your opponents, you get to work with them.

This Harry Potter Hogwarts Battle guide contains all the information you need.

Did you spend hours as a child mixing “potions” from things you found around the house? If so, this potion-making game is for you. In Quacks of Quedlinburg, you’ll take on the role of a quack (a fake doctor) and compete against your fellow players to make the best concoction. At heart, it’s a risk management game, but it’s also fun if you enjoy being creative.

Want to find out more? Check out our Quacks of Quedlinburg guide.

Question: Are there expansions for Disney Villainous?

Answer: You’ll be pleased to hear the answer is yes. There are five expansion packs: Bigger and Badder, Despicable Plots, Perfectly Wretched, Evil Comes Prepared, and Wicked to the Core.

Question: Which is the best Disney Villainous expansion pack?

Answer: My favorite is Bigger and Badder – it’s a lot harder than the original game, but that makes it all the more engaging. There are more opportunities for strategic play, so you’ll need to spend time brushing up on your tactics.
Sounds like your thing? Well, take a look at our guide to the best strategy board games for more inspiration!

Answer: The original version is simple – reflected by its recommended age of 10+ – but players who are new to the game may encounter some difficulties depending which villain they choose.
Once you’ve played a couple of times, you’ll quickly get the hang of it; then, I’d recommend introducing an expansion pack.

Answer: Unfortunately, it isn’t possible to play the game solo; you need to play with at least one other person. If you’d rather find a game you can play by yourself, we have a guide to the best solo games here.

Like a fine wine, Disney Villainous is one of those games that has only got better with time. It came out in 2018, but it’s still going strong in 2022; a new expansion pack (my favorite one) was released earlier in the year. Some characters are more difficult than others, but that’s part of the game’s appeal – it keeps you on your toes and stays interesting no matter how many times you play.